This is Part 2 of our exclusive interview with Shawn Martinbrough. You can read Part 1 here

Last week The Shadow League was excited to post Part 1 of our in depth conversation with illustrator/comic book artist Shawn Martinbrough as he dropped some serious knowledge about the inner workings of the comic book industry, the life of a brother who works in the comic book industry and the current era of mainstream acceptance for comic books and fans alike. In Part 2 of our conversation with Martinbrough, he talks about the phenomenon of changing the race, gender or ethnicity of a major character, the growth of the industry, working for Robert Kirkman, upcoming projects and much more.

So without further adieu, we present Part 2 of our exclusive with the author of “How to Draw Noir Comics: The Art and Technique of Visual Storytelling”, Shawn Martinbrough.

The Shadow League: What do you personally think of the phenomenon of changing traditionally white, male characters when we know theyre simply going to change them back once the hype dies down? Example, Female Thor, Black Captain America, etc.

Shawn Martinbrough: I dont have a problem with it.  If were talking about Thor, over the course of the series there have been various characters that have been able to pick up the hammer and therefore be granted the power of Thor.  Thats not a new concept. With regard to the Black Captain America, you have to remember that these characters were created decades ago when everything was white, male centric.  Times have changed.  To make these characters and stories viable and relatable to a more diverse audience, Marvel, DC and other publishers have to diversify.  Im more than fine with that.  I havent bought an issue of Captain America in probably over 20 years but was curious and picked up this new version of Capt. Im blown away by Stuart Immonens artwork and the story by writer Rick Remender is fun stuff.  In the past, whenever Black characters got a shot, they typically received minimal promotion and were assigned to creative teams that were less than an ideal fit.  Im glad to see this changing with this increasing attention to diversity.

TSL: Are there any other Robert Kirkman projects youre working on now or in the immediate future?

SM: Thief of Thieves keeps me very busy, so thats my primary focus.  I would like to get far enough ahead in the schedule so that I could do something The Walking Dead related in the future.  Perhaps a variant cover or something like that.

TSL: Do you have any television or film projects that youre working on?

SM: I do have a few things in the works with my company Verge Entertainment.  Thats all I can say for now.

TSL: What advice would you give to any person looking to draw or write comic books for a living?

SM: One of the main reasons that inspired me to create my art instructional book, How to Draw Noir Comics: The Art and Technique of Visual Storytelling, which is published by Random House was to share how I became a professional artist.  In the book, I describe my journey from taking art classes at a local community center to majoring in art at Fiorello H. LaGuardia H.S. of Music and Art and The School of Visual Arts to landing my first professional job at Marvel Comics.

An important piece of advice: First and foremost, art is a business.  Not only do you need to be technically proficient (you have to able to draw), but be able to meet deadlines and function in professional settings. I work with a number of clients outside of the comic industry and as the ultimate small business, I have to be able to sell myself. In addition to producing work that is on a professional level, I have to be able to take business meetings with clients.

Unless you are a savant, I stress that anyone looking to be a working, professional artist has to attend classes and get some level of training.

When breaking into any industry, you must study that industry and most importantly, your craft. I meet too many independent artists who want to work in the comic industry but unfortunately, their artwork or writing is below industry standards. The majority of the artists that inspired me had formal training. These artists attended art school and worked with editors who pushed them to improve. Today, it seems that aspiring artists want to work for a major publisher immediately instead of developing their drawing skills. Social media is a great tool in terms of getting your work seen by the masses but it also creates bubbles where aspiring creators are cheered on by their family and friends (who dont know any better) and have no clue how to operate or compete in a real professional environment. This holds true for aspiring writers especially. Theres a big difference between having an idea and being a writer. Its such a competitive field and many writers have taken some level of training or learned from a mentor in the industry. TSL: With all of the Black-owned comic book publishers that are around today do you feel we are entering something of a golden age for Black comic book lovers?

SM: This really depends on how you define “publisher”. I define a publisher as a company that consists of the following:

A). At least one person with editorial experience and at least one assistant.

B). Someone who handles the production tasks of processing the art and getting it print ready.

C). Someone who handles press and publicity for the company.

D). Most importantly, someone who handles accounting duties.

Next, a “publisher” puts out books on a schedule. I don’t consider folks who put out one book a year to be a publisher. For example, if you wrote one 150 word article a year for an independent blog site, would you consider yourself to be a professional journalist?

In order to be truly competitive in this field, media outlets have to start doing their homework and stop lumping folks who put out books independently with those who function as real publishers or professional artists and writers. We can’t give out titles indiscriminately. It undermines us. Thats not to say that independent artists dont put out quality work. I typically find that the best indy artists and writers have gained critical experience from working with established publishers first.

Also, I define a real publisher but they product they put out. From a quality standpoint, can your independent comic stand side by side with what Marvel, DC or IMAGE are putting out? I’m talking about the art, the coloring, the lettering, the package design and most importantly, the writing. Far too many people mistake having an idea with being a writer.

There are books featuring black characters by creators of color that I enjoy. For example, Watson & Holmes by Brandon Perlow and Paul J. Mendoza, Concrete Park by David Puryear and Erika Alexander, Ajala by Robert Garrett and N. Steven Harris and The Many Adventures of Miranda Mercury are all great comic book concepts that more than deserve adaptation to the big and small screens. At the same time, we cant discount those professionals of color who happen to be writing or drawing white characters. Its all part of the same movement.

I dont think that were entering a Golden age of black comic book lovers. There have always been black comic lovers. I think what has changed is that the rise of social media has given these comic lovers a louder platform than theyve ever had. The discussions that weve had in barbershops, restaurants, on the subway, etc are now being amplified to the world. I think its having an effect. 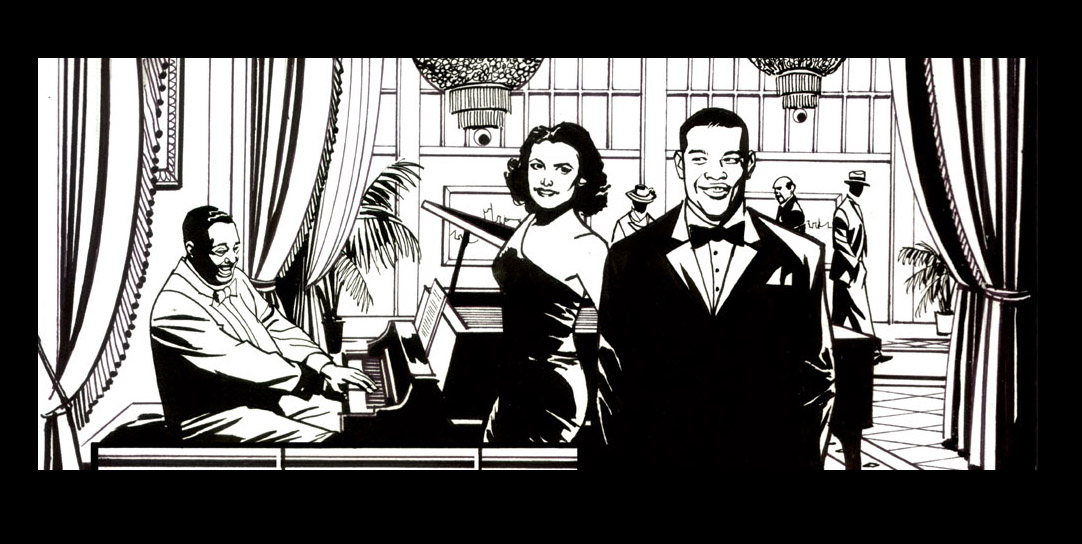 Thats it for this weeks TSL Comic Book Convo Presents. We hope this was entertaining and enlightening for both comic book fans and those who aspire to make noise in the comic book game. For more information on Shawn check out his site at www.shawnmartinbrough.com. As stated in Part 1 of our conversation, Martinbrough is the regular artist on Robert Kirkmans Thief of Thieves. Shawns art instruction book, How To Draw Noir Comics: The Art and Technique of Visual Storytelling, is published by Random House and has been reprinted in several languages.