This weeks TSL Comic Book Convo brings you Shawn Martinbrough, a brother who has been illustrating some of the most cutting edge panels in recent memory. To say that Shawn is one of the most prolific comic book artists working wouldnt be an exaggeration as hes blessed enough to have illustrated, inked or drawn or otherwise contributed to dozens of books, like Robert Kirkman’s Thief of Thieves, Luke Cage Noir, Black Panther: The Most Dangerous Man Alive Vol 1,  Punisher Max Hot Rods, World War Hulk: Front Line, Morlocks Vol 1 2,  and many more.  The Shadow League was happy to have spoken with a man whose resume is as long as Pippens arms. Check out this deep and informative Q & A with Shawn Martinbrough.

Whether youre a fan of his, or simply a casual comic book reader, chances are youve seen his work; its slick, its clean and its his signature style.

The Shadow League: Robert Kirkmans “Thief of Thieves” is another highly successful book that you have worked on for Image Comics as well as Captain America for Marvel Comics. What are some of the work-related differences between illustrating those respective books?

Shawn Martinbrough: My experience illustrating those two projects was completely different. The Captain America project was done for Marvel and the U.S. Army and Air Force Exchange Service and there were very tight restrictions.  First off, the book was done in connection with the feature film, Captain America: The First Avenger, so I had to follow a specific design for Capt. which was used in the movie.  The script was written by William Harms and every page of artwork had to be approved by both Marvel and the military.  I tend to follow scripts pretty closely and despite all of the editorial and government oversight, I dont recall having to make any edits.  Im not one of those artists that changes or deviates from whats written so any deviations that I make from the script would be purely visual.  For example, I might change a specific angle, or streamline an action sequence to make it more effective for the reader.  This Captain America project had a million copy print run and was only distributed on military bases across the country, which was pretty exciting. It was an honor that so many men and women serving in the military were exposed to my art.

Illustrating Thief of Thieves (TOT) with Robert Kirkman is different because I have far more freedom to create and design the looks of the characters and stage the action. During this series Ive been very fortunate to work with very talented and great writers, such as Robert Kirkman, Nick Spencer, James Asmus, and now Andy Diggle.  I think over the course of drawing 26 issues, Robert has only asked me to make two or three changes.

TSL: What was the coolest part about working on “Detective Comics”?

SM: As a Black kid from the Bronx, getting to draw one of the most iconic characters in the world was an amazing experience and a true milestone in my career. During my run as the regular artist on Detective Comics, I co-created new characters for the Batman universe and designed new sections of Gotham city.  Its an interesting experience to see characters that I created with the very talented writer Greg Rucka be adapted to the small screen on the FOX series, GOTHAM.  The first character that has appeared on the show was Crispus Allen. There will be others.

TSL: What were some your favorite projects that you illustrated for Marvel?

SM: Every project that Ive done for Marvel has been special to me in some way.  Over the years, Ive been fortunate to work with many talented writers, editors and editors assistants.  An early project that I illustrated for Marvel was an X-Men related mini series called The Morlocks written by Geoff Johns.  It was a great story set in Chicago and featured a new, diverse group of mutants who were battled the classic X-Men villains known as the Sentinels.  It was just announced that “Angel Dust”, one of the characters we created, will be appearing in the upcoming “Deadpool” film starring Ryan Reynolds.

Luke Cage Noir, written by Mike Benson and Adam Glass was another project that was very special. Set in 1920s Harlem, this mini-series was a great challenge to reinvent the classic Blaxploitation character Luke Cage to fit the style of the Harlem Renaissance.  Having spent a lot of time in Harlem as a teenager, it was fun to research and re-create the fashion and architecture of that period.

I illustrated the final chapter of the Black Panther series titled The Man Without Fear which was written by David Liss. I really enjoyed visualizing the iconic character, choreographing his fighting techniques, playing with how he moves like a cat. I even got to draw the classic Daredevil characters, The Kingpin and The Hand. 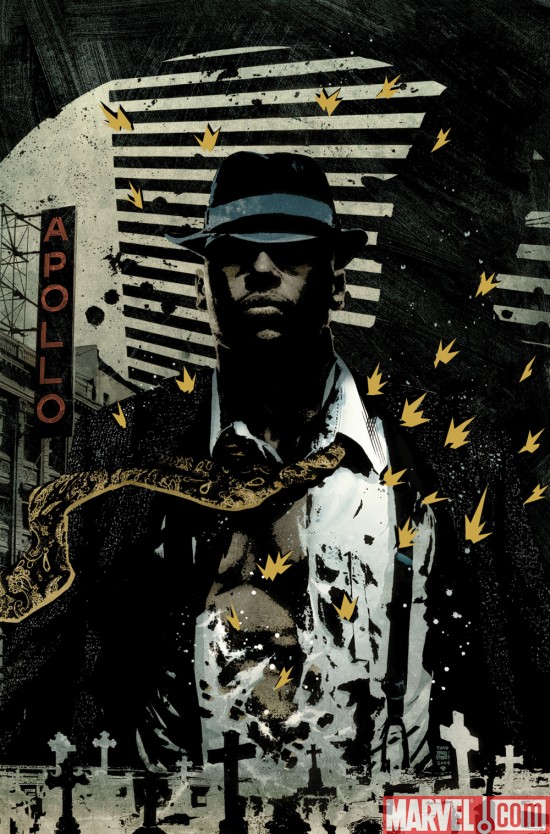 TSL: Tell me about “Thief of Thieves” and what you enjoy most about working on that title?

SM: Thief of Thieves is a monthly series about a master thief named Conrad Paulson a.k.a Redmond and his attempt to leave the life of crime and rebuild his broken relationships with his ex-wife and his son. Conrads partners and associates in the criminal underworld are not happy with his decision and use various tactics to persuade Conrad to change his mind. To make matters worse, a driven FBI agent has been pursuing Conrad and is close to finally bringing him in.

It was really flattering when Robert first reached out and invited me to work with him on Thief of Thieves. After corresponding via email, we finally met in person at the NY Comic Con, right before The Walking Dead show debuted on AMC. Its been a pleasure to work with Robert and the talented folks at SKYBOUND Entertainment even since.

From a writing standpoint, Roberts “writers room” approach of working with different writers to write each story arc of TOT has been very successful.  The transitions from the opening story written by Nick Spencer to the second arc written by James Asmus to the third and fourth by Andy Diggle have been seamless. Each writer, working with Robert, has adapted their own unique voice to reflect the unique tone of the series.

The thing I love most about illustrating TOT is the attention that the scripts pay to the characters and their motivations.  As the artist, staging action sequences are always fun but I truly love drawing dramatic moments where the characters simply act. Its also a wonderful challenge to draw so many real life locations from downtown San Diego to Venice, Italy.

I have an amazing amount of freedom and encouragement from Robert to create a diverse group of characters for TOT and with each issue, the universe grows.

As much knowledge and insight that was dropped in this week’s addition of TSL Comic Book Convo, there’s still more unique insight and industry perspective to be had in next week’s part two of our conversation with one of the most prolific illustrators in the game today.

If you’re in the New York metropolitan area you can catch Shawn participate in The Society of Illustrators’ Black History Month celebration along with comics writer and historian Danny Fingeroth, editor of Marvel’s Spider-Man line. The event will take place on Thursday, February 26, from 6-8 PM, at the Society of Illustrators, 128 E. 63 Street, in Manhattan. To reserve tickets, go to: http://tinyurl.com/oda2ty7

Until next time, flame on true believers, flame on.