Back in June, The Shadow League published my review of Marvel’s Civil War II. Written by Brian Michael Bendis with artwork from David Marquez and Justin Ponder, it was apparent from that first issue that this was going to be one of those sequels that was comparable in scope and impact to the first Civil War title 10 years ago.

Civil War II’s expansive storyline has mushroomed to encompass multiple titles and centers on a young Inhuman precog named Ulysses. However, unlike other precogs who only see the future, Ulysses can project the emotions he experiences from these visions to others. This has caused dissension among the ranks of one-time allies Captain Marvel aka Carol Danvers and Iron Man aka Tony Stark.

Thus far, the body count includes War Machine and David Banner, formerly the Incredible Hulk, and everyone from the Ultimates and Alpha Flight to the X-Men and Peter Parker are struggling to to do what each feels is right for the Earth and all involved. 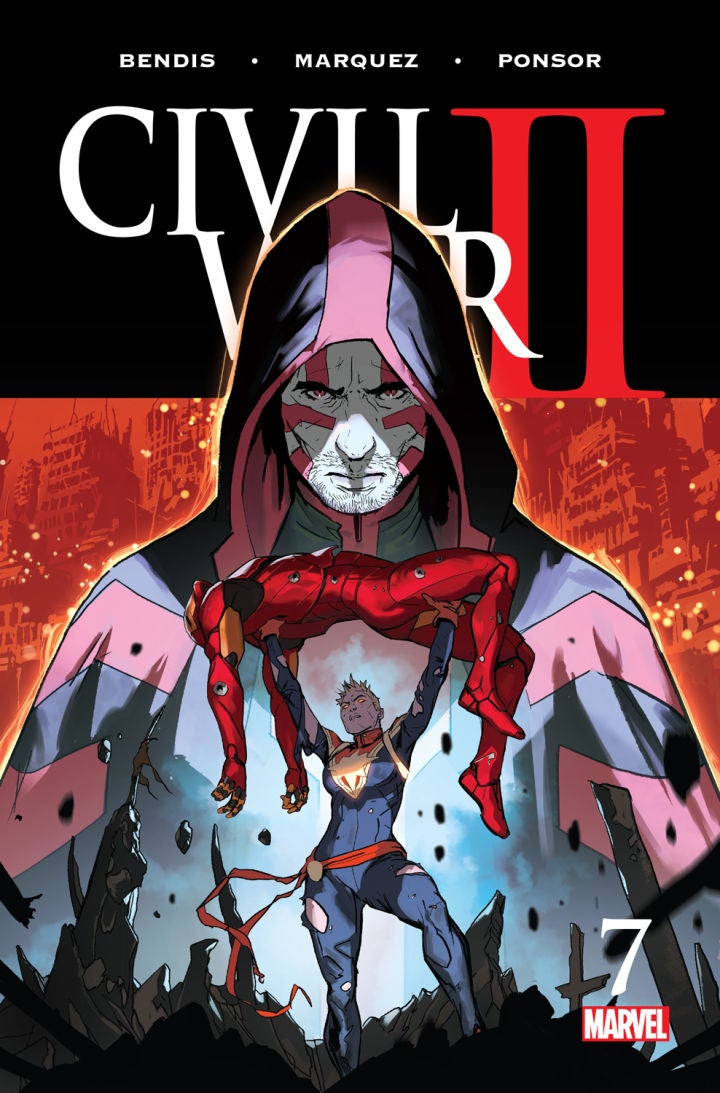 In a recent vision, Ulysses sees Miles Morales, aka the “black” Spider-Man, kill his longtime hero Captain America on the steps of the U.S. Capitol building and the competing heroes are rushing to see that this does not happen. Danvers, who in the law enforcement/military perspective that has become indicative of her character, believes the means that she is taking are for the betterment of all involved while futurist Iron-Man believes the future should be allowed to happen on its own without meddling or manipulation.

Meanwhile, the Inhuman Royal Family, consisting of Medusa, Crystal, Ronan and Karnak, have a vested interest in the safety of Ulysses for the sake of their own people, but are becoming increasingly concerned at the rapid growth of the young precog’s powers as well as their growing volatility.

Unlike many would-be cataclysmic superhero mashups like Secret Wars, Crisis on Infinite Earths and others, Civil War II’s primary storytelling arc focuses on smaller groups of characters. This allows for better dialogue, more precise storytelling and a greater sense of empathy from the reader. That is very important for total immersion into this world.

Some may feel that the story’s conflict is really a personal vendetta between Captain Marvel and Iron Man. But, for me, the recent presidential election has shown that polarizing figures often have legions of like-minded individuals flock to their side for a multitude of reasons; sympathy for the cause, kinship with a leader who espouses their ideas, or an overall feeling of “doing the right thing”. That makes the fact that the entire Marvel comic book universe seems to be taking sides around two immensely powerful personalities all the more plausible. Thus, my potential disbelief is suspended.

In a departure from other books and graphic novels, Civil War II utilizes a different artist to draw the oftentimes apocalyptic visions of Ulysses to life. Fans of Andrea Sorrentino’s work will immediately recognize it from the the Old Man Logan series. Coincidental or not, Old Man Logan makes an appearance in this issue as well.

Originally, Ulysses was conscious of his visions but, though visceral and seemingly real, they where only visions. However, with the evolution of his powers, Ulysses’ consciousness now seems to be able to manifest itself into this visions as well. He sees a post-apocalyptic world full of destruction and largely barren of order, much like that portrayed in the original Old Man Logan miniseries. Logan saves him from a rampaging son of the Hulk and he asks Logan what happened to the world.

Logan tells him that the destruction began when Iron Man “pushed her too far”. He doesn’t say who Iron Man pushed too far, but Ulysses immediately assumes it is Captain Marvel and asks the Royal Family to intervene immediately.

Meanwhile, Captain America and Miles Morales are standing face-to-face on the steps of the Capitol, each reassuring the other that they will not fight one another and they’ll do anything to make sure the version of the future that sees Captain America’s brutal death will never come to pass.

But, Captain Marvel, true to her super cop style, arrives to take young Spider-Man in “for his own good” even though Captain America and Miles seem to have the situation in hand. But Tony Stark was on the scene the entire time as well, camouflaged in what appeared to be an anti-Captain Marvel version of his armor. The two fight and, as is seemingly always the case when Stark designs an armor to fight a specific individual, it is ripped to shreds by the ridiculously powerful Captain Marvel.

In a classic comic book cliffhanger, the viewer is left to speculate on whether Stark survived a blow very similar to the one that befell the deceased War Machine at the hands of Thanos – which is what kicked off all the countering viewpoints in the first place.

Packed with intrigue, page-turning dialogue and a superhero fight for the ages, Civil War II #7 just kicked it up a notch for the main storyline and is making me anxious to read several other side titles that I may have missed. It went from good to great, just like that.