I wouldnt consider Tyronn Lue the greatest African-American NBA coach of all-time yet, but he has had an auspicious beginning, so we have to start our list with the future of the craft.

His overall ranking on this list is fifth, but hes No. 1 in the hearts of African-American basketball fans right now.

After learning under the great Doc Rivers for five years, Lue took the reigns of a shaky Cleveland Cavs team last year and led them to the 2016 NBA championship. Of course, some folks were quick to point out that LeBron James was really the on-court coach for Cleveland and anyone could have done what young Lue did. 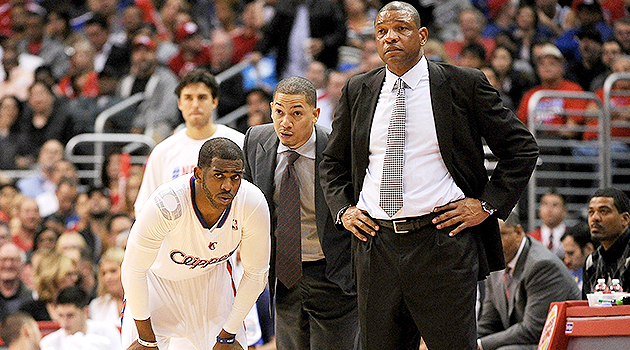 In reality, what Lue accomplished in being at the helm of the Cavs first ever championship was beyond significant. By the time Cleveland had rebounded from a 3-1 deficit and was clutching the shiny ball, he’d proved that he was the total package as a head coach.

There are 30 coaches who have earned titles since the NBA was established in the 1949-1950 season and just six of them have been African-American. Lue follows in the legendary footsteps of Bill Russell, K.C. Jones, Alvin (Al) Attles, Lenny Wilkens, and Doc. All of these rare odds-defying men of color should be lauded during Black History Month.

1. KC Jones – He doesnt historically get the credit for winning two titles with the Celtics in 83-84′ and 85-86′. You know how it is, especially back then. A brother couldnt get credit for being a mastermind. Thats reserved for coaches with slick hair and lighter skin. The fact that he was coaching Larry Bird and Kevin McHale in Boston in the ’80s also contributed to Jones being considered more of a game manager than an X&O guru.  But for a brother to have the success he had in Boston (Jones took the Celtics to four NBA Finals in five year) during a time when Black players didnt want any parts of the city is just downright dope.

Not to bog you down with numbers, but Jones is never mentioned among the NBAs greatest coaches. In retrospect, his pedigree as a player and coach makes him a mini-Phil Jackson. A basketball lifer who only knew how to quietly break ground and win at every level.

Even in college, Jones was a racial barrier-breaker. In 1954, he became one of three African-American starters for the University of San Francisco along with Bill Russell and Hal Perry. USF was the first major college program to start three Brothers.

Jones won 11 of his 12 NBA Championships (eight as a player, one as an assistant coach, and two as a head coach) with the Celtics and he has a perfect 8-0 record in the finals as a player. He defeated Magic Johnson, Worthy and Kareem and also the Twin Towers of Ralph Sampson and Hakeem Olajuwon. Thats five HOFers right there that his Celtics mini-dynasty knocked down in the clutch.

He was simply a winner and in my opinion, the greatest Black coach to ever stalk the NBA sidelines.

2. Lenny Wilkens –  A nine-time NBA All-Star, Wilkens is not only a member of the NBAs 50 All-time Greatest Players List, but during his Hall of Fame career as a baller and a sideline stalker, which saw him lead the 1978-79 Seattle Supersonics to the NBA promise land, Wilkens was always cooler than the other side of the pillow and his game was colder than a naked night in Antarctica.

Wilkens coached the Dream Team to the gold medal for the United States at the 1996 Summer Olympics in Atlanta, and was an assistant to Chuck Daly with the original Dream Team at the 1992 Olympics in Barcelona.

Hes done it all in the game, but his greatest statistical accomplishment is his second-place standing on the all-time coaching wins list with 1,332, trailing only Don Nelson (1,335). The NBA has had a lot of record-breaking and iconic coaches, but nobody did it longer or more often than Wilkens, who coached in 2,487 regular season games, 89 more games than Nelson, and over 400 more than any other coach in history. He was the first African-American coach to prove that Black players can seamlessly transition into head coaches if given a chance. 3. Doc Rivers – When it comes to African-American coaches in todays game, Doc Rivers is the Top Shotta. He cemented his legacy by winning an NBA chip with the Celtics in 2007-08 and then getting back to the finals in 2010, but losing to the Black Mamba in a classic throwback series. Rivers was a deft point guard and leader whose playing career spanned from 1983 to 1996 playing for four different NBA squads, most notably the Hawks and Knicks.

Rivers began coaching in 1999 with the Orlando Magic and won the Coach of the Year award in 2000 after his first year with the Magic. That season, he led a team that was picked to finish last in the league to a near playoff berth. I actually covered the Magic that season as a reporter for the local newspaper and Rivers was truly a leader of men. Hes passionate, intelligent and like a father figure to some of his younger players. Hes known as being a franchise-builder. A guy you bring in to take some talented pieces and transform them into a cohesive wrecking ball.

I was most impressed by Rivers during the Donald Sterling fiasco, when he stood tall with his players against the guy paying his checks and demanded the NBA to remove Sterling or lose the support of the players.

4. Bill Russell – Bill Russell has been the exception. He was a black man who played in Boston in the racist ’50s and ’60s, but thrived as the centerpiece of a Celtics team that won an unprecedented 11 titles during a historically dominant run. He was the only other player that could match the great Wilt Chamberlain blow for blow on the court and be received with the same reverence as a Muhammad Ali when addressing social issues.

As a player coach, Russell used his basketball wisdom and understanding of team-oriented, defensive-heavy concepts to win titles in 68 and 69. Russell was the first brother to make the jump from player to championship coach. He’s a pioneer. A leader on and off the court. A conscious observer and outspoken proponent of the importance of addressing the complexities of race and inequality in America. 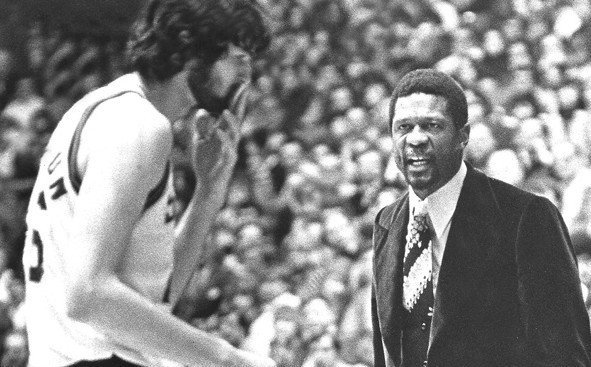