Yesterday, in a move that was over fifty years in the making, it was announced that the United States and the government of Cuba have agreed to resume diplomatic relations for the first time since the Cuban Revolution (1953-1959). There were so many thoughts that raced through my mind when this news first broke on Wednesday afternoon.

Like many in our readership, I came into adulthood under the constant threat of nuclear annihilation in the Communism versus "freedom" Cold War; at least that’s how it was played up in the media back then. Always partial to the story of the underdog in my history lessons, Cuba became of particular interest to my 12-year-old self, drawing my attention for a variety of reasons.

As a kid, one of the first things I ingested regarding the Cuban Revolution was that Fidel said one reason for the insurrection was to fight racism and classism. That struck me as a young Black American child that was already aware of these forms of social control. To the immature, pre-adult me, it meant that somebody actually put their money where their mouth was and took up arms against racism. As I grew into a man I realized I had romanticized both he and Che Guevara as revolutionary champions against racism. Cubans with direct European descendants, the majority of the people who fled to Florida during the massive Mariel Boatlift of 1980 fall in this category, would likely beg to differ on him being called a champion of anything. But the Afro-Cubans on the island would probably challenge that statement as well.

With the decline in the health of Fidel Castro in 2008, a relatively moderate version of socialism appeared, and through his successor, brother Raul Castro, came the distant hope of renewed diplomatic ties with the U.S. in the distant future. But it would take another six years before things came to a resolution, due in part to Cuba’s imprisonment of Alan Gross for espionage back in 2009.  But despite all of that, I can't help but think about Assata. As a person of African descent and of partial Cuban ancestry, I am particularly interested in this because of the high concentration of people of African descent residing on the island of Cuba. Also, I am ever cognizant of how poor people of color are effected whenever a giant makes a power move.  Then presidential candidate Barack Obama alluded to an increased willingness for increased dialogue with the island nation back in 2008; but this latest news comes as something of a shocker. And still there is no word as to the fate of Assata.

Cuban athletes have always been among the best in the world in whatever endeavor they were so inclined to undertake. Cuban athletes, known to excel in baseball and boxing, have been defecting to the United States ever since the 1960s and have been doing so with the distinct possibility that the communist government would never allow them to see their families again. The most famous athlete to make the trip recently is Los Angeles Dodgers Yasiel Puig. Once only the brave and desperate dared risk stormy seas and machine gun turrets to risk making it to the United States. But the ease of departure cannot be understated as nine Cubans made their way to the United States to the economic freedom afforded to them by Major League Baseball. Additionally, Cuban boxers are renowned as being among the most skilled in the world. The thaw in relations between the countries may bring additional boxers to the United States or open up the door to bigger boxing events between the two countries. It's speculation currently, but that can breed hope, and hope is always needed by those who have been limited or overtly oppressed.

According to the New York Times, the Obama administration had been secretly negotiating the release of 53 political prisoners with Cuba, including U.S. contractor Alan P. Gross- who was recently released in exchange for three Cuban spies held by the United States since 2001. It appears the younger Castro may have been using these prisoners in a game of high stakes poker with the United States to better his country’s position. One cannot help but recall the not so distant days in which anyone convicted in Cuba of spying for the United States would have been summarily fed to a firing squad, blindfolded with the cliché cigarette in their mouths, or sentenced to a life of isolation in some sweltering Caribbean Gulag.

It’s easy to recall stereotypical American media depictions of Fidel Castro as a tin-pot dictator, even as he has outlived the vast majority of his Cold War contemporaries. Now, as we near the end of the Obama administration’s White House reign, we find that he has been secretly mending decades of hurt feelings, suspicions and barbed wire standoffs that have painted a majority of the history between Cuba and the United States.

For its cooperation in these recent negotiations, the United States will remove Cuba from its list of countries it claims sponsors terrorists.

Yet no mention of Assata.

History remembers that the Cuban Missile Crisis was the closest the American military has ever come to a direct face-to-face confrontation with the former Soviet Union, and the United States, under John F. Kennedy, didn’t blink. However, it appears as though a great deal of those old feelings of animus between the United States and Cuba stem from the old realization that Castro almost brought a superpower to a stalemate. The pawn of the Soviet Union almost mastered a tenuous situation.

Today diplomacy between the two countries was, and still is, a tricky business. But one is hopeful that a lasting and brighter day between Cuba and the United States has dawned with this agreement. However, I can’t help but fear for the future of Cuba's poor. On the one hand, with the resumption of diplomatic ties between Havana and Washington DC, economic ties between the two countries are in the immediate future as president Obama ordered Secretary of State John Kerry to ease economic, banking and travel restrictions placed on the island immediately, saying he wanted to do away with "outdated methods".

As a young boy and novice researcher, one of the first things that I thought about in regards to the island nation was “It’s only 90 miles away from Florida” and I can’t help but ponder on it in in the same terms in current day as well. In theory, the economic windfall that would sweep over the island of Cuba would revitalize the stagnant economy and create a new middle class in a manner similar to the creation of communist China’s modern middle class-albeit on an infinitely smaller scale.

But 11 million people have been building a nation in isolation from the economic god that is the United States for over five decades. Obama announced that an ease in economic restrictions which have handcuffed the local economy since the early 60's would begin to take place immediately; but history has shown that whenever the American dollar floods a once barren economy, thievery, misappropriating and cronyism becomes the new norm. The disappearance of $60 billion dollars in Iraq and Afghanistan since 2001 are recent examples of that from a greater and lesser extent, respectively, athough the Cuban economy is certainly in better shape now than the aforementioned countries prior to U.S. military intervention.

Cuba was once considered a playground for the criminally rich, and the poor Black and Indigenous descendants of the island were discriminated against and taken advantage of. Though the official line is that Cuba is a colorblind society, there are significant portions of the population that believe otherwise.

Whenever the island of Cuba is mentioned, I cannot help but thing about the ongoing fight against racial oppression. And whenever I think of racial oppression, I think of Assata Shakur. I fear for her fate and suspect that her situation is being negotiated on as we speak. No word yet on the fate of this now 67-year-old soldier in the Black Panther Party for Self-Defense and the Black Liberation Army. As far as the idea of a People's Revolution in the United States is concerned, their is no greater living symbol of revolutionary thought and action than Assata Shakur. Activism and resistance were her life's work. Yet, the violence and chaos she is accused of being the catalyst for in New York City and Northern New Jersey paints her as a violent terrorist and a cop killer. But to many poor Black people she represents the resistance. 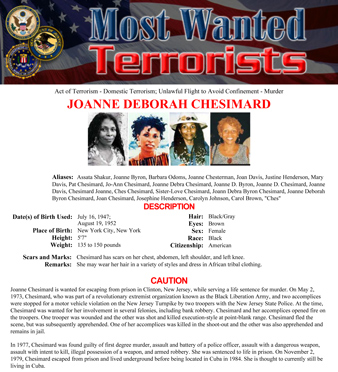 Born Joanne Byron, Assata Shakur was charged in the shooting of a New Jersey State Trooper death of New Jersey State Trooper Werner Foerster and assaulting Trooper James Harper. Shakur was charged in six other crimes that included murder, attempted murder, armed robbery, bank robbery and kidnapping. She enjoyed three acquittals and three dismissals for those prior charges, but was convicted of first degree murder in the death of Foerster-and has maintained her innocence in that case from day one. Assata escaped prison in 1979 and fled to Cuba for political asylum in 1984. In 2005, the FBI classified her as a domestic terrorist and offered a $1 million reward for her capture. In 2013 she was placed on the FBI’s Ten Most Wanted Terrorists List, making her the first woman to be added to the list.

With the increased dialogue between Cuba and the United States comes the real possibility that Assata Shakur may be handed over to U.S. law enforcement in the near future. Though the establishment has deemed her a dangerous subversive, her inspirational role in the greater African Diaspora cannot be overstated. A woman who has defied 30 years of attempted capture administered by the country that was able to locate both Sadaam Hussein and Osama Bin Laden. Once I conned myself into believing Obama would eventually pardon Shakur, but that idea died with her addition a terrorist watch list.

Still, I can’t help but hope for the best for Cuba’s renewal and Assata Shakur’s continued freedom as well. Many will read these words and believe the author is pro-terrorist or some sort of radical, but that would be a misnomer to be certain. However anyone who risks their life to better the position of poor Black people in the United States is a hero to me. Radical? No more radical than those who fly the Confederate Flag, which represents an insurgency that almost ripped the country in half, in their living rooms and defend their right to do so. No more radical than the southern states who fly this flag of insurrection next to Old Glory and refuse to differentiate between the two. No more radical than manipulated grand juries and racial profiling.

Assata is the antithesis of that.

Assata Shakur is a hero to me and millions of other poor people in the United States and abroad.