During Final Four weekend in Houston, The Shadow League went behind the scenes for a few conversations with some big names in the college basketball tapestry. In this next installment, we bring you Naismith Memorial Hall of Fame coach and Nike’s current Global Basketball Sports Marketing Director George Raveling.

Coach Raveling’s life journey reads like a Hollywood script – a poor kid from Washington, D.C. who has to leave home after the death of his father and his mother’s nervous breakdown at a young age, he discovers a love of sports, and particularly basketball, that propels him around the globe to become one of the most successful and revered coaches, trailblazers, influencers, mentors and businessmen that the game has ever seen.

His achievements merely scratch the surface of who he is, what he symbolizes and the overall power of his life story.

Coach Rav hopped in my Buick Enclave for a ride around H-Town and shared some of his thoughts and insights on his passions, the power and beauty of basketball and a dream that turned into a reality.

George Raveling is a citizen of the world. If looking for him on a consistent basis, you’re bound to find him in every corner and crevice of the globe, from Brooklyn to Beijing and beyond.

To say he’s come so far from his roots in the ghettos of Southeast Washington, D.C. would be true on a surface level, but his itinerant lifestyle began from the moment that his beloved mother was admitted to St. Elizabeth’s Psychiatric Hospital four years after his father died of a sudden heart attack. She would spend the remainder of her days there due to what he later learned was a severe nervous breakdown.

Raveling bounced around between his grandmother’s, uncle’s and aunts homes until the age of 14 when a Catholic charity paid for him to attend a boarding school, St. Michael’s, in Pennsylvania. For the next four years, he slept in a room of 80 beds that were filled with mostly white kids who, like him, hailed from broken homes.

He poured himself into his books, using those fascinating words and stories as a passport to dream about the adventures awaiting him in the outside world. Raveling also channeled his work ethic into sports, where he became one of the state of Pennsylvania’s leading scorers and rebounders as a prep basketball standout.

He’d never thought seriously about attending college until schools began offering him scholarships. And while most might have seen him as simply the second Black basketball player to ever suit up for Villanova University, where he led the squad in rebounding from 1958 to 1960 and once hauled in 29 in a single game, his mind was also engaged in the evolving American struggle for its soul. 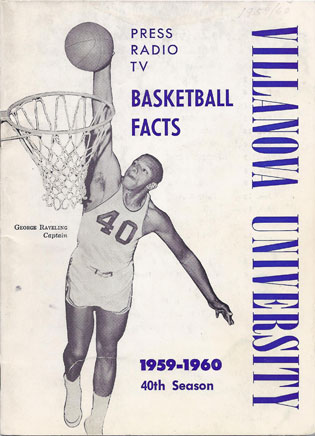 When he arrived at the leafy, bucolic campus on Philadelphia’s affluent Main Line, he was already studying the civil rights movement taking place in the south, enamored with this charismatic young preacher, exceptional orator and key figure in the Montgomery Bus Boycott during his freshman year.

He felt a connection with that young man, Martin Luther King, Jr., and went to hear him speak at least half a dozen times during his undergraduate years. He studied his mannerisms, the inflection in his voice and tried to imitate his flowing cadences while speaking. He soon became as passionate about current events, history and culture as he was about basketball.

Raveling was walking around the D.C. Mall on August 27th, 1963, the day prior to the March on Washington, when he was approached by an event organizer who, noting his size and muscular build, asked if he’d be interested in working as a security guard for the event.

When he showed up at the appointed hour the next morning, he learned that he would be stationed on the steps of the Lincoln Memorial.

At 4:00PM, he found himself standing next to his hero, Dr. King, as the reverend delivered one of the the most iconic speeches in American History. Amid the thunderous applause at the conclusion of King’s oratory, as the civil rights leader folded the speech in half, Raveling approached him and simply asked, “Dr. King, can I have that speech?” King handed it to the earnest young man in a moment of supreme serendipity.

On April 4th, 1968, when Raveling was simultaneously working as an assistant coach at Villanova and as a rep for the Converse sneaker company, he learned that Dr. King had been assassinated. It was the first time in his life that the insidious disease of American racism crushed his spirit.

Raveling went on to establish himself as a young, emerging basketball coach on the rise who could walk into any living room and leave with a recruits name signed on a national letter of intent. Lefty Driesell, the head coach at the University of Maryland, recognized his gifts and added him to the Terrapin staff.

In addition to recruiting and signing elite prospects like Len Elmore and Tom McMillan, he coached the school’s 1970-71 freshman team (freshman were ineligible then to play varsity basketball) to an undefeated season and a #1 national ranking.

He went on to become the first African American head coach in the conference that is now known as the Pac-12, and was the league’s Coach of the Year in three separate decades – 1976 and 1983 at Washington State and in 1992 at the University of Southern California.

He was an assistant coach on the 1984 Olympic Basketball Team, one of the greatest young squads ever. He was also the only coach to lead a team that defeated the 1992 Dream Team, when he instructed a Team USA Developmental Squad, with Roy Williams as his assistant, of college all-stars that included Bobby Hurley, Allan Houston, Chris Webber, Grant Hill, Rodney Rogers, Jamal Mashburn, Eric Montross and Penny Hardaway. After retiring from coaching, he worked as a television color analyst for Fox and CBS Sports before going to work as Nike’s Director of Grassroots Basketball. He was named the sneaker company’s Director of Global Basketball in 2000.

Despite a workload and travel schedule that would wear out a millennial, Raveling’s eyes still dance behind his fashionable, thick glasses when he hears an idea that excites him. If you’re a friend of his, you’ll get deluged with articles and recommendations on books that he’s reading. His versatile, nimble mind is constantly juggling a vast array of interesting topics.

His favorite, though, is leadership. In 2012, he was awarded the prestigious John W. Bunn Lifetime Achievement Award by the Naismith Memorial Basketball Hall of Fame. On Valentine’s Day of 2015, it was announced that he would be inducted into the Hall as a coach.

The day of the announcement is fitting when you consider that the game, his first true love, gave him a vision for his life that he could never envision growing up as a child in the slums of Washington, D.C.

Coach Rav’s daily wisdom, his book shelf, thoughts on food and travel and his friends’ thoughts on basketball, as well as his own, can be found on his own website, coachgeorgeraveling.com – Coaching For Success.

He’s one of the most admired elder statesmen in the coaching fraternity, his phone often buzzing with a quick question from the likes of Kentucky’s John Calipari, Villanova’s Jay Wright or Texas’ Shaka Smart, among a plethora of others. Along with Georgetown’s John Thompson and Arkansas’ Nolan Richardson, he opened possibilities in major college coaching, enabling many Black coaches to walk through doors that had long been closed to them. He made the dream possible to those who followed in his footsteps.

And he became familiar with the power of that dream by meeting his idol and role model, and walking away with his words tucked into his pocket. Dr. King literally handed his dream to George Raveling at the March on Washington, 53 years ago.

Raveling has spent every day since sharing his own dreams with others.