Most guys who grew up in the Kung Fu flicks era remember the rawness of the martial arts sojourn, the seeking of new challenges and environments that truly test your combat skill set.

It wasnt about money for these guys. It was about honor, growth and spiritual development in worlds devoid of such nobility.

You probably played voyeur to these worlds crafted by the Chinese filmmakers and martial arts stuntmen. You know, the Asian guys with shaved pates and ponytails carrying around swords and wearing pre-MC Hammer baggy britches.

However, the spirit lives and breathes in a new generation of martial artists of color who have traversed the urban tundra of Americas inner cities, finding no solace for their combative longings.

Instead they are choosing to create their own narratives in the humidity of Southeast Asian countries, dispelling their rancor towards American martial arts politics for a throwback culture of simplicity and study on the other side of the world. Enter the city of Baltimore, where narcotic gunplay scenes from the cryptic urban cable dramatic series The Wire will never leave your subconscious. Dorian Price grew up amid this socioeconomic turmoil in the 80s, finding respite on Saturdays with its collage of martial arts wizardry exhibited on TVs Kung Fu Theatre.

The small TV in the kitchen sparked his young mind into worlds far from his own that he began to have a deep unexplained longing for.

I used to listen to the Wu-Tang, but the kids in the neighborhood were all gong to the NBA, going to the NFL, no one is saying Im going to make money by going to the martial arts or professional fighting unless it was boxing.

Price grew up in West Baltimore, then moved to the county, He attended Towson High School through his sophomore year before enrolling in Avon Old Farms boarding school in Connecticut. As one of a few black students, he benefited from a Headmaster who grew up poor and made inner city student recruitment a priority.

While there was racism, it wasnt to the levels that I had heard about in some other schools where it was ridiculous, said Price. All students had to work and play three sports, so I played football, basketball and ran track.

Returning home from prep school, he played basketball in summer leagues and in recreation centers throughout Baltimore City, relishing the citys reputation for hoops prowess.

Price received offers to play college football, but waited to see if he could get a basketball scholarship. When it didnt materialize, he decided to go to Hampton University in the Virginia Tidewater area to study Sports Management.

My mother and father had both gone to Central State University, and I saw the pride they had for going to an HBCU,” said Prince. “And A Different World was popping [on television] so I always had that fascination.

Naval Amphibious Base, Little Creek, the major operating base for the NAVY Seals was also down there and the thought of being a Seal started to creep into Prices developing combative mind. I looked in the phone book and there was this picture of this Navy SEAL with his MP-5 rifle on a gym ad,” Prince said. “I went down and did a trial class, loved it and there were a bunch of martial arts classes at the time. One of them happened to be Muay Thai.

Starting with the lesser-known Filipino martial art of Kali Escrima, Price found a love for Muay Thai and in less than a year signed up for his first fight. This was the 90s where the words State Athletic Commission had no governance over martial arts.

Promoters created shows, and it was here that Price thrived, traveling to do battle in New York, Philly and the Tidewater areas while soaking up the new adrenaline rush found in the budding Muay Thai full contact circuit.

In 98 I, ended up going to Thailand,” said Prince. “I stayed over there for a little bit of time, came back and I didnt think of anything else. The drug of Muay Thai was shot in my veins man, and I knew there was no way I would break that addiction.

However, the American public began to dictate what was popular in martial arts and the formation of MMA as the newest way to challenge yourself, with its multi-discipline culture, held a fleeting allure for Price, who was still trying to figure out his way. Eventually, Price attended Ohio State University for grad school, receiving his masters in Healthcare Administration. After gaining some experience fighting throughout Ohio under the auspices of UFC veteran fighters Kevin Randleman and Mark Coleman, Price landed a slot on Season 6 of The Ultimate Fighter: Team Hughes vs. Team Serra. He lived in a house with 15 other fighters, duking it out tournament style on Spike TV to get into the UFCs fighter roster. Im the pure definition of wasted talent when it comes to MMA, laughed Price. When it came to the groundwork, even the wrestling, I just had no interest in it. “All I cared about was the stand up portion of it, which is pretty funny that I made it to the highest level of the sport.

Price used the reality show money and bought a ticket back to Thailand, where he became the first foreigner to be sponsored by a smaller Thai fight camp. Quickly, he learned the hierarchy, where you come up in the smaller Thai provinces, working your way up the fight ladder through blood sport to the capital of Bangkok and the major stadium shows and more reputable gyms.

The kid from West Baltimore was now living in Thailand undergoing a spiritual nirvana.

The first three months I was blind in one eye with an eye patch because I had gotten an eye infection,” said Prince. “I had a little room with no air-conditioning in it just a fan. It was something out of a Vietnam movie just sitting there sweating but the whole time I loved it. Nothing would break me this was a test to go further.

Still the adrenaline rush persisted and Price had found his paradise where the politics of American organized sport were erased and the purity of combat took precedence. Like the Wild West before lawmen tried to regulate the frontier, Thailand allowed men to be true gladiators.

No medical requirements, no Commission paperwork, no oversight. In a place like Phuket, where you can buy steroids like aspirin in a pharmacy, its an accurate assumption of fighters being juiced and plaster laden hand wraps being hidden beneath gloves. These are all the makings of a noncompetitive and even deadly affair.

I remember the first time they wrapped my hands they made a cast and I was thinking to myself holy sh*t, I wonder what the other guys got on his sh*t too, laughed Price. But I was wondering with a smile, because it was a level of fear that kind of drove me.

Periodically, Price had to cross the border into Cambodia, Burma or Laos to get a new work visa, which had 2-3 year terms on them. On the return from one visa run, he met some teammates at a stadium where one of his teammates, who had just fought, was poisoned.

Previously, there was a bet between his camp leader and the leader of a rival fight camp, and they poisoned Prices teammate to secure their chance at winning. Shock soon turned into reality when the top fighter in the camp revealed that he too had been poisoned in the past, this was not an anomaly.

I said, ‘I want to be so good that they want to poison me,’ Price said emphatically. That actually became my goal, because as a foreigner, if I was that good that they bet that kind of money on me and were willing to poison me, then that meant that my skill level and level of respect was at an all time high.

Price lived and fought in Phuket for two years, also traveling frequently to the Philippines, developing a name on the local Muay Thai kickboxing circuit. After some frustration with the gym, he moved to Bangkok and the world famous Sitmonchai Gym, becoming the first foreigner to be fully sponsored and live there like a Thai fighter.

The little room he lived in was beside a cock fighting chicken coup and housed three mattresses on the floor, one for him and his two trainers, or Kru as they are called.

Theres a hole under the door and when I asked if we could tape it from spiders and snakes, one of my Krus says, It’s okay, we put you by the door so if something bites you first, you die, Price laughed.

Having just come back from the States before going to Bangkok, he suffered light-headedness and a bloody nose for six days while getting re-acclimated to the heat. After his first full day of training, the big boss of the camp took notice and alerted Price that he had scheduled his first fightin three days.

Within three weeks, he had four fights under his belt.

Since then, he’s had over 50 fights, even competing in the prestigious K-1 kickboxing tournament.

Matt Serra told me once, In fighting you have to be thick-skinned and have a short-term memory, said Price. Youll win, youll lose, and the losses only strengthen you to go further on, because its a journey not a destination.

Price was astonished that amid the love he received, that darker skin was deplorable within Thailand society. From apps that lighten skin in pictures for Facebook posting to whitening cream being found in everything, Price exhibited pride for his complexion amid the absurdity.

I remember the hardest thing was finding lotion that didnt have whitening cream in it,” he said. “They believe if youre darker skinned, it’s because your family worked in the field. And if you re lighter skinned, that means you had a better job in an air conditioned environment.

Still, the Thais love and respected all American fighters and never faulted them for their blackness only their own. Yet Price feels that this hypocrisy still trumps the one in American combat sports where kickboxing figures are more Van Damme and Jason Statham then brothers from Baltimore with real Asian combat experience. 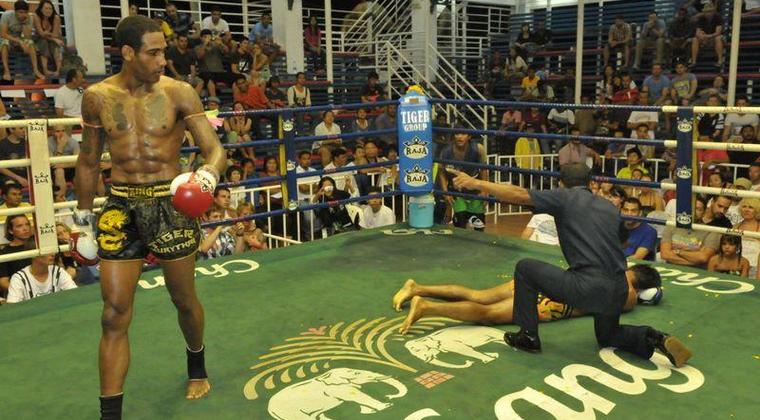 America wants Muay Thai to be white, said Price. Brothers reach out to me to go over there because theyre not getting the exposure or the fights they want to get in America, something that I felt too. While Thailand may have this sort of affinity to white skin being beautiful, they accept all.

The new black martial artist is looking past the traditional dojo and UFC feeder systems to make their marks. The allure of Southeast Asian countries like Thailand has never been brighter and for traditionalist fighters like Price, America and its layered racial politics is not worth the wait, or the hype.