Fighting to Cover on the Court

During the greatest sports event, there is a buzz of excitement from athletes, sportsmedia and fans who are engrossed in the glory, the defeat and all the drama of the 2016 Olympic Games in Rio, Brazil. We see athletes, coaches of all races, religions and gender identity. These Games have been the catalyst for many discussions around issues of social justice and brought attention to the roles that women have played in leading what are considered battles.

In an era when fencer Ibtihaj Muhammad speaks out against Islamophobia and is celebrated for making sports history as the first Black Muslim woman to represent the United States in hijab, some sports federations are still pondering whether hijab (a traditional headscarf that covers the face and the neck, or can be worn in a turban style) is acceptable on a basketball court.

At the intersections of sports and social activism, there often stand strong female athletes. Over last few years, these women have publicly advocated for crucial issues in social justice. WNBA teams have spoken openly and defied uniform bans because of their commitment to #BlackLivesMatter; the USA womens soccer team, reigning world champions, rallied for financial equity from their #EqualPlayEqualPay.

These women have inspired and will continue to encourage athletes to fight for justice and change the world through different platforms.

For the last two years, a small – yet mighty- group of female basketball players have been mobilizing for sporting equality while using the #FIBAAllowHijab hashtag; they are pushing to solidify the right to wear headscarves as they play.

These covered ballers created a Change.org petition directed to Horacio Murator, President of the International Federation of Basketball (FIBA), demanding that FIBA end the headcovering ban in basketball.

Muslim basketball players are currently banned from playing basketball professionally in FIBA sanctioned leagues or international tournaments if they choose to wear a hijab.

FIBA is the body that governs rules and regulations of the sport. They have banned hijab and any other religious headcoverings- including turbans for Sikh players and skull caps worn by Jewish men.

As of today, the #FIBAAllowHijab campaign has garnered more than 70,000 signatures. Leading the charge is Indira Kaljo, a Bosnian-American former NCAA player who told me via email that she was pleased with the amount of support this campaign is receiving.

I was not surprised by the amount of signatures from the wider community because in 2014 the same thing happened, Kaljo wrote to me. People are still good. Thank God. We still have hope in our humanity to fight for the right things- for the most part.

Fighting for Muslim women to have access to a sporty they love is certainly the right thing to do. 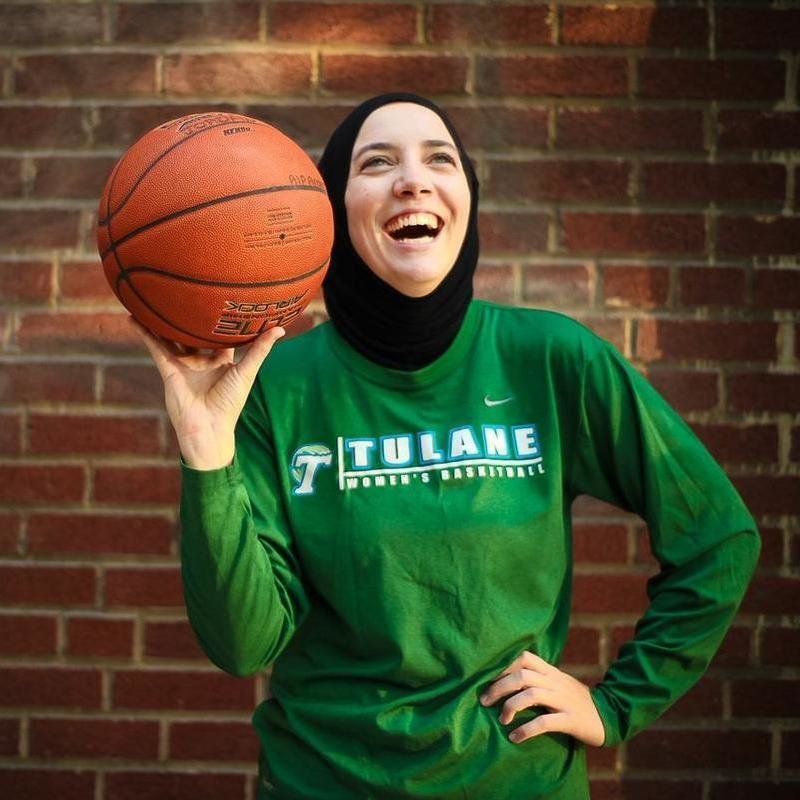 FIBA has pivoted from making a decision and has deferred this most pressing issue to the Technical and Legal Commissions branch. Meanwhile, thousands and thousands of female Muslim players  are benched or they give up.

Not only does a hijab ban mean that hundreds of thousands of people are excluded from the game, it sends a clear message about intolerance. FIBA doesnt discriminate between religions and ban anything considered potentially dangerous.

“The uniform regulations are of a purely sporting nature, they insist.

FIBAs article 4.4.2 states that headscarves, jewelry or accessories may not be worn due the possible danger. But there is no record of a basketball player being injured due to their religious headcovering- or any incident of injuring another player.

In a piece for USA Today, former NCAA point-guard and first woman to wear hijab at the Varsity level, Bilqis Abdul-Qaadir also challenged this reasoning: “For [FIBA] to say it’s a safety hazard, nowadays women are getting extensions and I’ve been slapped in the face by braids plenty of times. So I’m playing with my hair tied up, tight, it just doesn’t make sense.”

Not only has Abdul-Qaadir had to deal slaps from her opponents hair, she has had to deal with blows from the international federation that is supposed to advocate for basketball and for players around the world.

I think back to a line I read in a piece by Habeeba Husain of SLAM magazine in a piece for Narratively, in which Abdul-Qaadir speaks about when she found out her goal of playing pro basketball was over. I kind of just cried once I found out. I didnt even know if we could take action, trying to get the rule banned. At that point, I thought I couldnt do anything about it.

As such, she has put dreams her dreams of being a professional player on hold.

I think I am leaving my dream career behind. Although becoming a professional basketball has been put on hold, I find true happiness in working with our youth, and using my story as an inspirational tool.

Abdul-Qaadir is currently working as an educator and Athletic Director of an Islamic school in Memphis.

Abdul-Qaadir recently released the trailer for a film called Life without Basketball that chronicles her struggle with accepting that she cant play professional basketball because of FIBAs rule. It is heartbreaking and simultaneously infuriating.

In 2014 several players took to social media to create awareness about their exclusion from basketball. Subsequently the same year that IFAB (governing body of FIFA) officially overturned their own hijab ban. Shortly thereafter FIBA announced a temporary trial period in which they would test and re-examine the alleged challenges of headcoverings on the court.

But the ruling was not very well implemented and communications and directives were lacking. Just weeks after that announcement, Qatars womens basketball team was not allowed to play at the 2014 Asian Games in Incheon, South Korea.

Officials argued that the allowance was not for International games but restricted to National level play. As a result the disheartened and frustrated Qatari basketball team withdrew from the tournament. I wrote about this for VICE Sports two years ago and sadly not much has changed since then.

Fast forward to 2016, headcoverings are still banned from play by FIBA on a global scale. Elementary, secondary school children and even intercollegiate players are usually permitted to play. The difficulty arises in world-class play and International competition. Essentially, the better you are at basketball, the less you will be allowed to participate. You have no future as a professional player.

Asma Elbadawi is a Sudanese-British player born and raised in Bradford, England. She and teammate Ezdihar Abdulmula wear hijab and are working hard to get their message out.

Abdulmula was recently featured in a BBC Body-Positivity film to help shift thinking in society and challenge the notion that hijab is a barrier to sport. She adds that lots of people tell her she is an inspiration for playing in her scarf.

Elbadawi, a guard, reiterates the importance of having Muslim athletes for young girls to look up to. We lack role models in the sport sector which I believe is the most important sector as sports impacts our well being and is linked to many many health benefits, she says Not to mention influences the way we perceive and interact with ourselves and others.

There are more than 15 basketball players in the #FIBAAllowHijab campaign, from USA to Indonesia; England to Turkey; who are challenging the injustice of this exclusion.

The 2016 Rio Olympics will have two Muslim-majority countries playing basketball: Turkey and Senegal. None of the team members would be allowed to play if they chose to wear a headscarf.

However, this is not an issue that is specific to a Muslim country and certainly not how this issue ought to be be presented . Abdul-Qaadir and Kaljo are American. Abdulmula and Elbadawi are British.  Furthermore, a governing body comprised of white men should not have the authority, particularly with little evidence, that a headscarf could be dangerous.

IFAB has done tremendous amount of work in the sport of soccer regarding safety and headcovering, FIBA could certainly forgo this bureaucratic process and just allow regulated headscarves, from brands such as Capsters and ResportOn that met IFABs criteria, on the court.

They have already been proven by the worlds most popular federations medical board to be safe. Abdul-Qaadir concurs: FIFA, has already dealt with this same issue, she writes over email. I dont understand why the process to remove the rule is so long. 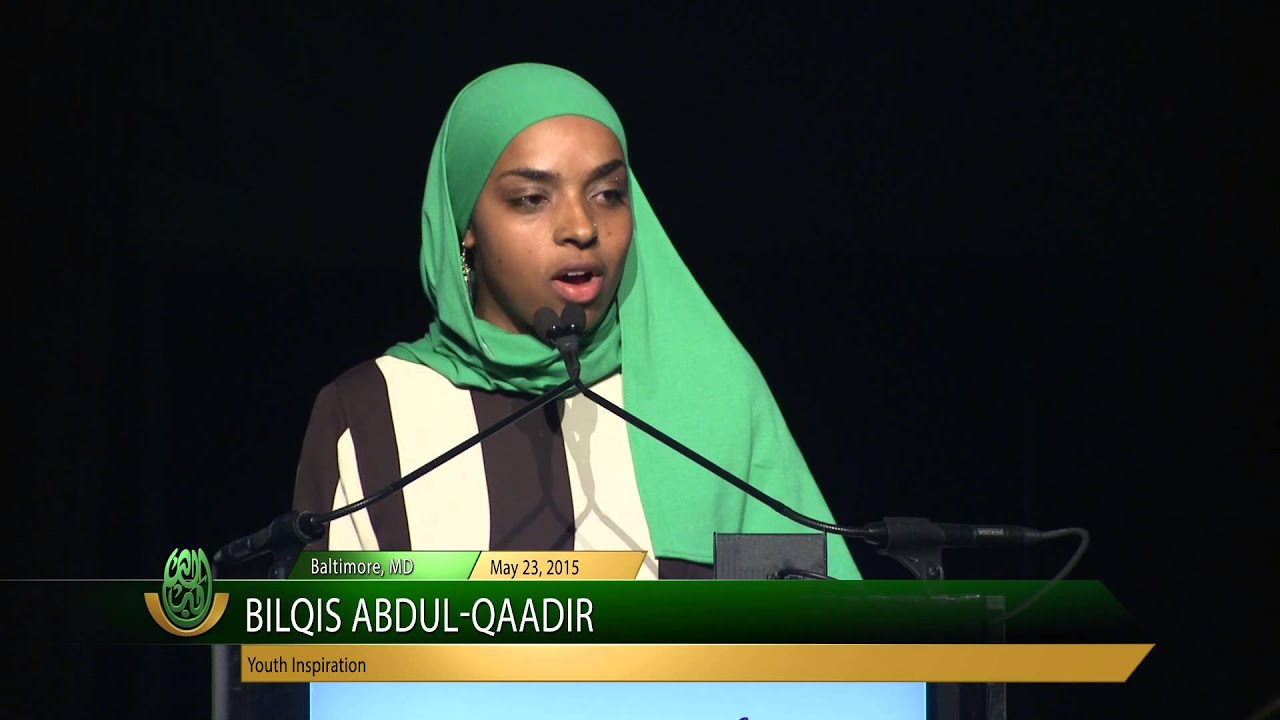 The Muslim womens basketball community includes women from all over the world and of many races. This is an issue where freedom to play and right over body autonomy and clothing choices collide.

I reached out to FIBA for comment on this issue. They did not reply.

In the meantime, the women immersed in the #FIBAAllowHijab movement forge on, sadly there is almost pin drop silence from other basketball players including those in the WBNA and the NBA. In fact, very few athletes have supported the women on this at all including Muslim professional athletes. Does this bother them?

Kaljo tells me it does. Especially our fellow Muslim athletes first and foremost.If they don’t speak out to support us, how can we expect anyone else to?

Kaljo doesnt necessarily expect solidarity from other basketball players.I am not surprised the WNBA/NBA have not spoken out about this yet because there is no reason and pressure for them to do so. 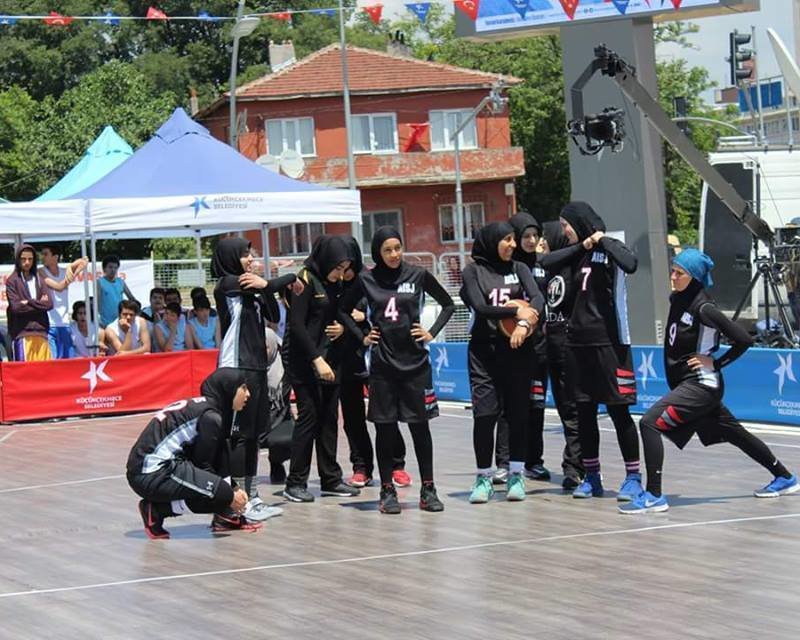 Elbadawi sees it differently: We can’t expect the WNBA/NBA players to speak for us since they may not even be aware of this being a barrier.  Our own communities have no idea these laws exist. So we need to get their support and their signatures. We can not rely on those who do not face the same struggles to speak for us.

But wouldnt WNBA players who have shown their bravery and brilliance want to elevate the sport? Wouldnt FIBA want to have more people play and diversify the game?

Abdul-Qaadir agrees and thinks that if professional players did speak up, the impact on the movement may garner more traction.

But she points to the bottom line. The problem is, professional athletes nowadays dont necessarily worry about social problems until it hits close to home for them. Money rules! If speaking out doesnt benefit their situation in any way, then we can continue to expect nothing from them. I hate to sound so negative, but thats just the honest truth.

As a Muslim woman who has endured this stress and missed out on years of playing the sport I love because of a hijab ban, Kaljo, Abdul-Qaadir, Abdulmula and Elbadawi have my empathy. 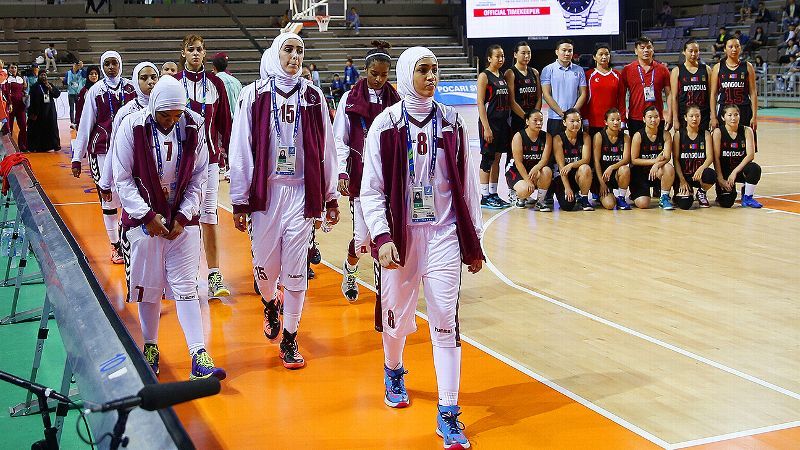 They also have the support of a some in the sports media world. It would seem unfathomable that in this day and age, there is still debate on a womans place in sports and whether she belongs there. I can imagine that it is devastating to be told by a room full of privileged men from the upper echelons, that there is no place for hijabs in basketball.

FIBA is expected to make a final decision later this month. Until then, hijab-wearing basketball players are keeping their defense tight and hoop dreams alive.

UPDATE:  I received an email update from Change.Org that FIBA has decided to wait on a decision until “later in the year”, as opposed to in August, as had previously been mentioned. They are urging people to email FIBA and request that the decision be postponed until no later than September of 2016.