When the myth of invincibility that the UFC was creating for its most marketable athlete evaporated as Holly Holms foot connected with Ronda Rouseys face and all of the commentary settled down in the aftermath of the stunning upset, it finally became cool for her to admit that shes black.

Actually her mom dropped the news to a reporter during a family stroll in L.A. Very assertively, but matter-of-factly, considering Rousey has been the most popular athlete on the globe for the past two years. Its odd that Rondas great grandfather was a big-time brother in his day and this has never been mentioned until ma dukes recently let it be known.

UFC mastermind Dana White has marketed her as a white, blond-haired, gorgeous, barrier-breaking superstar fighter who embodies the spirit of white America and its love for combat sports.  A beautifully-sculptured Amazon goddess inside the ring and out.

Captured by TMZ is video of Rondas mom revealing to an African-American camera guy that they share a common blackness. Ronda was hanging with her sister and mother in L.A. on Tuesday when, according to the outlet, her mom busted out the black fun fact … not only is Ronda’s great grandfather black … but he’s kinda famous! 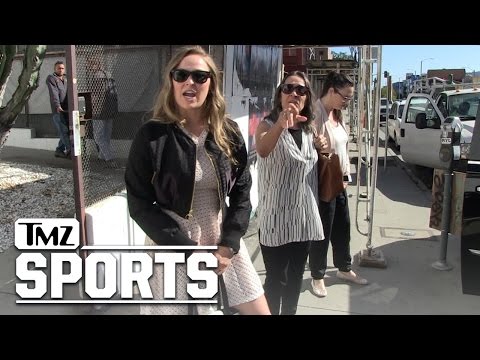 His name is Dr. Alfred Waddell and according to Rousey’s mother, AnnMaria De Mars, her grandfather was a Trinidadian who immigrated to Halifax, Canada in the early 1920s and became one of the first black physicians in North America.

After some investigating of my own, I was not surprised, but psyched, to discover that Waddell was also a hardcore pioneer in the Canadian civil rights movement.

AnnMaria, whose father was Joseph Arthur Waddell, also told the reporter to reference Before His Time. It’s about my grandfather, Ronda’s great grandfather, she said.

‘Before His Time’ is a documentary about Waddell’s life.

‘Alfred Waddell set out for New York in 1923 with his young bride Amelia Maria, dreaming of becoming a doctor.

‘Despite his own hardships, Waddell treated many isolated people who had no access to medical care. Waddell brought medicine to far flung black communities; spoke out against injustice; and even billeted black musicians like Cab Calloway, when he could not get a hotel room.

‘A champion of social equality, Dr Waddell raised his children with ideas of fairness and earned the respect of an entire city,’

Thats some great stuff and it gives you a better understanding of where Rouseys spirit, intelligence and ambition come from. Knowing that, I feel differently about her ability to rebound from the Holm situation.

Simply because I know how my people react to struggle.

I cant help reflecting on the many social media comments suggesting that the white Rousey dates outside of her race because of her curvacious figure, independent nature and a certain flavor she exhibits during interviews and in combat. Well, now we know they werent way off. She actually dates within her race. No different than Amber Rose, who often draws physical comparisons to Rousey.

This bombshell of sorts hasnt gained that much traction since the video of Rousey’s mom breaking down the family genetics surfaced. I dont know if most MMA fans are pissed off at her for even admitting such a thing or if the impact of Rousey as an icon is waning.

Outside of Cedric the Entertainer, most black folks are flexing that I knew there was something about her,Sunday morning QB rhetoric.

Cedric says he was hyped to learn that Rousey was part black and joked that he hoped her next job is to join the cast of ‘Love & Hip Hop’ so she can “beat everybody’s ass!”

On the low though, brothers are pissed off that she waited until she fell from grace to let everybody know that her genetics are graced with a multitude of ethnicities that contribute to her star power, fighting ability and universal appeal.

Her mom could have at least announced it during Black History month.

‘They show (the documentary) during Black History Month every year in Canada,’ AnnMaria said.

Maybe this was well known in Canada, but how come the US press never uncovered that small fact? The black community would have loved to rally around and claimed Ronda Rousey too, instead of praying that she got knocked out silly. Maybe they will now.

Its nothing to hide. In fact, I think it makes her an even truer representative of America, as it’s a country that functions with a multitude of cultures, races and religions all living under one roof. Obviously Rouseys mom wanted people to know who they are and the historical foundation that was laid, which eventually contributed to Rondas success.  I still just wonder why this is merely a footnote in her legendary story, which is still very much unwritten.