Before the college basketball season began, North Carolina was a popular choice to win it all. Thats not necessarily going out on a limb because UNC is always a cop out pick to win it all because they usually have a talented team full of blue chip recruits.

Entering last nights 77-74 loss to underdog Villanova in the 2016 NCAA Mens Basketball Championships, the Tar Heels were supposed to hold the edge in coaching as well with Roy Williams at the helm. In an illustrious 40-year career in which he became the fastest coach to 700 wins Williams has taken his teams to eight Final Fours with Kansas and North Carolina and is the only coach in NCAA history to have led two different programs to at least four Final Fours each.

The game was an all-timer as Kris Jenkins swished a three at the buzzer to give Villanova a perfectly scripted, one shining moment type of victory with the legendary Rollie Massimino sitting in the stands next to The Czar Mike Fratello.

It was reported that Massimino wouldnt be at the game because his wife was feeling ill. However, when I saw him in the building, my thoughts were, Phife Dawg is going to have to send his UNC squad some serious heavenly help because Nova had its own basketball god adding inspiration and karma to the situation.

Even a basketball legend like Williams couldnt muster enough wizardry to overcome Massiminos presence and Jay Wrights ascension to elite sideline stalker. And as Wu-Tang Clan told us in 93, after the laughter then comes the tears.

Not only will UNC go back to Chapel Hill a game short of greatness, the school will still have to deal with the ramifications of  a long-running academic fraud scandal that originally included five NCAA charges, including a lack of institutional control for poor oversight of an academic department popular with athletes and the counselors who advised them. 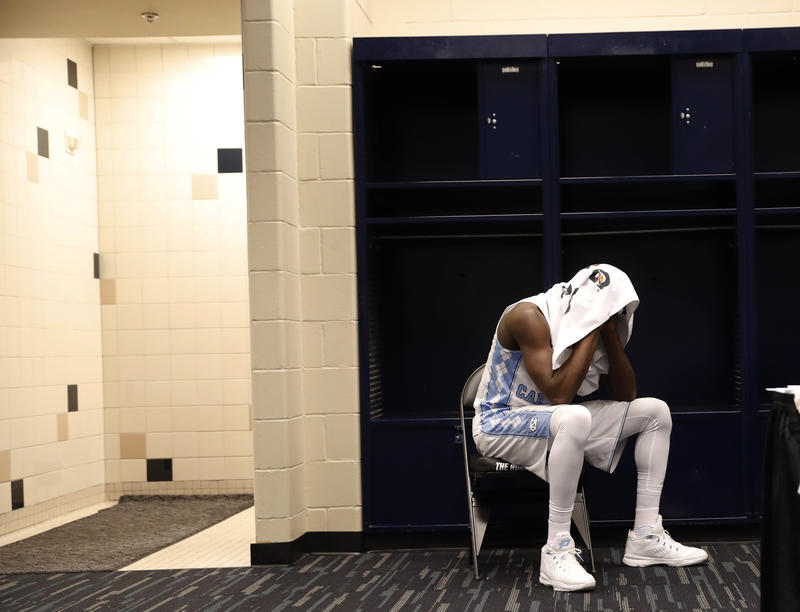 With all of the hoopla and imagery and pageantry centered around March Madness, most of us forgot about the turmoil that UNCs athletic and academic departments are still embroiled in. It wasnt reported at all during this NCAA tourney, as Carolina is the darling college program of major sports networks such as ESPN and TBS.

According to reports, two years after the UNC football program was hit with sanctions in March of 2012, it was discovered that for two decades, student athletes were funneled into so called fake classes known as paper classes within the African and Afro-American Studies (AFAM) department from 1993 to 2011. The fact that these classes were disguised as African-American studies courses is disturbing enough for a ton of reasons. It gets better too.

There were no classroom sessions and students merely had to hand in a paper at the end of the semester that investigators say were leniently graded and often plagiarized. All charges are considered potential Level I violations, described by the NCAA as a “severe breach of conduct.”

Being that no coaches are being targeted, Williams excused himself from any direct blame long ago.

“Everyone who loves Carolina is truly saddened by these allegations,” Williams said in a statement when the fraud was first uncovered. “We aspire to and work toward meeting higher standards than the actions that warranted this notice. Our university and numerous outside groups have looked at every aspect of our academic and athletic life. As a result, Carolina has implemented scores of new processes and checks and balances that have undoubtedly made us a better university. Hopefully, we will never again receive such a notice.”

Jim Boeheim spit the same game when Syracuse was smashed by the NCAA and lost postseason eligibility and scholarships. The legendary Orange coach also got suspended for his lack of control. Still no real acceptance of accountability was displayed.

These coaches act as if they have no idea whats going on when something bad happens, but take all of the credit when the players come through for them.

New allegations surfaced concerning the soccer team in January of 2015, which lengthened the NCAAs investigation process prolonging a decision on sanctions, but on a positive note it also gave the UNC basketball team time to make a run at a National Championship. It also meant that the football team didnt have any negative interference on National Signing Day.

Carolina was always known as a university of academic and athletic virtue when Dean Smith ran the show. He was hands on and had a pulse on every aspect of the program. Nowadays it seems as if coaches want to rule with an iron first and then excuse themselves from any blame when scandals are going on around them concerning things that you would assume theyd micromanage like everything else.  A players academic and social well-being is something great coaches care about.

Either way, Roy dropped the ball. Williams and Carolina have made it clear that the school has lost its way somewhere along the line and competing at an NCAA Division 1 level became more important than actually producing scholar-athletes who will be contributing members of society.

You saw the dejected look of Carolina players in shock after the loss. Folks on Tobacco Road were not only sad, they know that the basketball drunk state they were in will now wear off and the detox process will begin for the entire university.

When those sanctions hit, UNC athletics may never be the same. At the very least, the way they run their machine from the inside will be much different than in the past and Roy Williams will have to really show his coaching grit as he will be performing with one hand tied behind his back until Carolina has paid its debt to the NCAA..