There were all sorts of storylines in last night’s Final Four matchup between Syracuse and North Carolina. You had the No. 10 seed Orangemen trying to become the first double-digit seed to advance past the national semifinals.  Jim Boeheim’s squad already met the Tar Heels twice during the Atlantic Coast Conference regular season, losing twice. But conventional wisdom says that’s it’s extremely difficult to beat a team three straight times in the same season.

For their part, UNC was flying high on confidence after advancing to the Final Four by way of stomping out Notre Dame, 88-74, in the Elite Eight.  Coming into last night’s game, it was imperative for Syracuse’s matchup zone to be tight, so as not to provide the gaps in which the Carolina guards could find big men in the lane.  It was also suggested that Syracuse’s point guards and wing players would have to do most of the heavy lifting on the offensive end, along with the Syracuse big men needing to hold their own on the boards.

Spoiler alert, none of that happened! Final score: 83-66 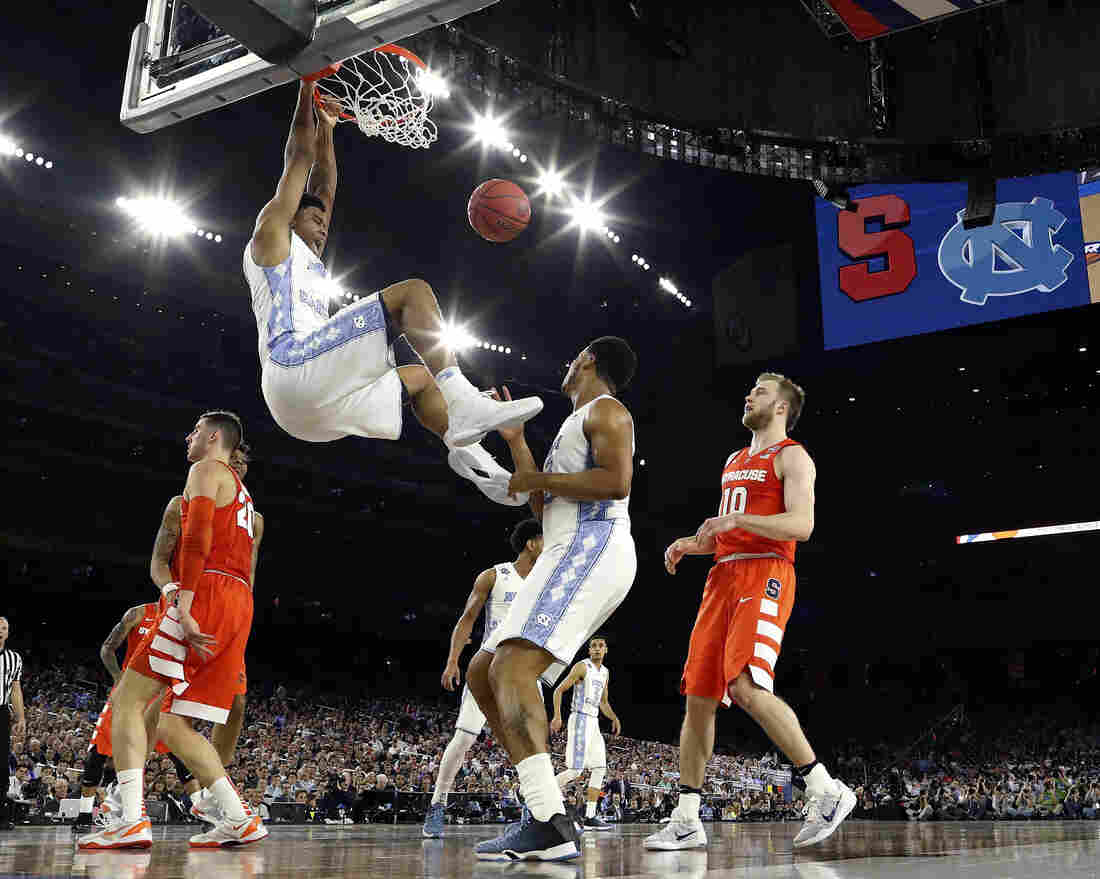 The Orange were game for the challenge early on, and even threatened to take the lead at the 8:54 mark, but a missed three-pointer by Orange forward Tyler Lydon led to a bucket by Carolina point guard Joel Berry II.   The score was 18-16 Carolina after Berry’s make, and that was the beginning of a subtle momentum swing that UNC would ride until the end of the first half.

All game long, the Carolina big men ate like it was prime rib night at the Golden Corral.  Star forward Brice Johnson was putting in major work prior to the half, but foul trouble caused him to sit for a while.  However, center Kennedy Meeks is all about “eating”  in the paint. He gladly picked up Johnson’s proverbial fork and continued feasting on ‘Cuse on the low blocks.

The halftime score of 39-28 may have given Orange fans some hope that yet another miracle of epic proportions was in the works.   The fact that UNC went 0-10 on threes in the first half was offset by their efficiency around the basket.

Meeks had 15 points and eight rebounds, while Johnson added 16 points and nine, respectively.  Not to be outdone, forward Justin Jackson snatched several drumsticks off Meeks’ plate on his way to 16 points for the game. UNC outscored Syracuse 50-32 in the paint. The second half saw Roy Williams’ crew continue to milk the Syracuse zone, emphasizing ball movement to get their bigs open near the basket. 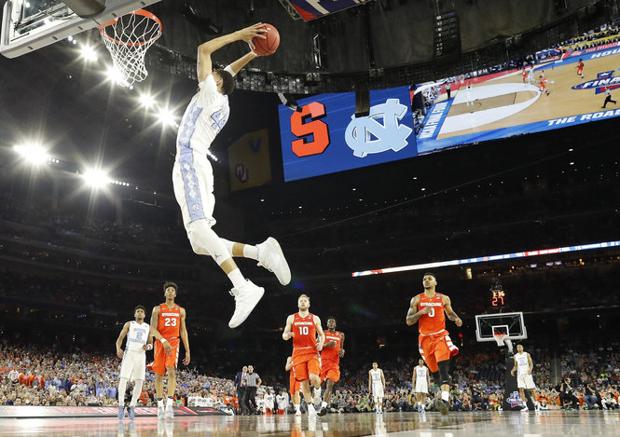 For their part, the Syracuse big men seemed like they were constantly out of place as they scrambled from side to side chasing the ball.  Zone philosophy dictates that the strong side defender must have a teammate slide over and fill the space he vacated, and yet another teammate must then fill the hole in the vacated hole in the zone.  But Syracuse’s frontline had difficulty executing that requirement, especially in the second half. Syracuse would fight back to within seven points early in the second half, led by the hot shooting of guard Trevor Cooney, as well as a fearless scorer’s mentality exhibited by freshman shooting guard Malachi Richardson. Forward Michael Gbinije needed to have a great game in order for Syracuse to hang with North Carolina.  He was 4 for 13 versus Virginia in the Elite Eight, 8-23 versus Gonzaga in the Sweet 16, and 3-11 versus Dayton in opening round. The graduate student who transferred in from Duke would turn in yet another wretched shooting performance in the final game of his collegiate career, connecting on 5 of his 18 shot attempts, including 0 for 5 from behind the arc.

Perhaps sensing the game slipping away, Boeheim tried the same full court press that gave Virginia fits in the Elite Eight. Carolina’s size and athleticism, however, were just too much.  The press only made the problem worse as the Orangemen’s brief run was answered with a resounding counter-attack as North Carolina sliced through the pressure with ease.

Remember that awful UNC three point shooting in the first half? Well, watching Cooney drain his must have awakened something deep inside of Carolina guard Marcus Paige, who drained three from downtown in the second half.  Joel Berry II was masterful in orchestrating the game for Carolina.  His 10 assists were instrumental in getting the Tar Heels’ frontcourt in the groove early and often.

For their part, Syracuse can hold their heads high knowing that they extracted every bit of “win” out of a team that many believed shouldn’t have been in the NCAA tournament in the first place.

We’ll see if they can pull it off in Monday night’s national championship game against Villanova.