On Tuesday, University of Nebraska Football player football player Michael Rose-Ivey made an impassioned and heartbreaking overture before the gathered press.  Filled with incendiary language and maddening racism, Michael’s own indomitable Black manhood and pride perfectly counterbalanced the nauseating remarks that fell from the mouths of who he described as former high school classmates, Nebraska alumni and fans.

Just four years ago, I recall lamenting that there were very few individuals brave enough, or qualified enough, to become activist/athletes in the same mold as Muhammad Ali, Jim Brown and Bill Russell.

The article I wrote was titled Sports Activism is Dead, Long Live Sports Activism. Published at EURweb.com in August 2012, it garnered much attention. I was invited onto Chicago Talk Radio WVON with Faruq Basir to discuss the topic of increased participation in social activism from Black professional and collegiate athletes, citing the fact that the Black struggle needed as many proponents and allies as it could possibly muster. 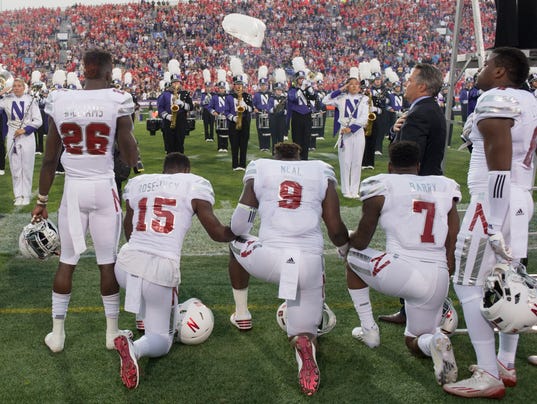 While it was gut-wrenching to watch Rose-Ivey’s statement, I am reminded that America’s exposure to his words, as well as the ongoing racial dialectic that has engulfed the National Football League, and whose energy has radiated to high school athletics as well, are all part of what I wished for four years ago.

“They’re wearing a University of Nebraska uniform, and all student-athletes should be aware that their actions reflect not only on themselves but everyone else,” Daub said. “It wasn’t their forum to take advantage of and use as a Colin Kaepernick cloning situation. Everyone will say the First Amendment gives them the right, but they shouldn’t be able to take advantage of the captive market of the football team and the university’s reputation.”

University president Harry Bounds had this to say in response: “College campuses, as much as any space, must be places where robust, even uncomfortable, debate is welcomed and encouraged. Our students, faculty and staff absolutely enjoy the right to participate in these dialogues in the manner they choose under the First Amendment and board policy.”

As I’ve often said in the past, freedom of speech is protected by one’ s First Amendment rights. However, there is no freedom from the consequences of free speech.  As was apparent when Nebraska Regents came out their respective faces.

Nebraska Gov. Pete Ricketts is slated to meet with Rose-Ivey next week.  For perspective, Gov. Rickett is a Republican and has endorsed Donald Trump for president.

The transition of time and space can be a fuzzy thing, not only from a the arena of quantum physics, but as far societal upheaval and change as well.

Just four years ago, six months after the death of Trayvon Martin, there was still some doubt as to whether the activism that popped up in the immediate aftermath of his death would grow into an actual, self-sustaining movement, or if his name would be just another hashtag or street mural.

Today, four years, one month and almost one week to the day of the publication of one of my first articles on activism and athletes, the landscape is more arable for exercising First Amendment rights than at anytime in the past.

As for, Michael Rose-Ivey, teammates Mohamed Barry and DaiShon Neal, and others wishing to have their voices heard, keep on keepin’ on.