The National Basketball Players Association continues to lead the charge in the Conscious Players Movement.

On Wednesday, The NBAs new Dream Team, NBPA Prez Chris Paul and Executive Director Michele Roberts, made another player-first power move, announcing that its player representatives have voted unanimously to fund health insurance for all retired NBA players with at least three years of service in the league.

(The fact that the owners should be willingly funding this is a whole other story.)

This program is the first of its kind among North American professional sports.

“The game has never before been more popular, and all the players in our league today recognize that we’re only in this position because of the hard work and dedication of the men who came before us,” said Paul, the perennial All-Star point guard with the Los Angeles Clippers. “It’s important that we take care of our entire extended NBA family, and I’m proud of my fellow players for taking this unprecedented step to ensure the health and well-being of our predecessors.”

According to NBA.com, The unanimous vote — which took place during the NBPA Summer Meeting in New York on June 26 — established a multi-faceted health insurance program through UnitedHealthcare, the country’s leading health benefits provider. The current proposal includes:

Retired players with between three and six years of NBA service time but who are not yet eligible for Medicare would be offered a plan that includes medical, hospital and prescription drug coverage with modest out-of-pocket costs for deductibles and co-pays;

Those with between seven and nine years of service would be offered the same coverage with even lower out-of-pocket costs;

Retired players with at least 10 years of service would be offered the same coverage as the seven-to-nine year players, and would include coverage for their entire family;

Retired players with three-nine years of service who are eligible for Medicare would be offered a $0 deductible and $0 co-pay plan along with a low-cost prescription drug plan; those with 10+ years of service to receive this coverage for themselves and their spouse.

The open enrollment period for retired players would begin this fall, with coverage beginning on January 1, 2017.

It all began in the aftermath of the last collective bargaining agreement, where the players ultimately felt like they had been bamboozled in negotiations by a double agent.

Fisher said this at the time:

“Today for the National Basketball Players Association was a day of change. Players representatives in the general body of our association have made their voice and their votes heard. Today, the motion was raised, seconded and passed unanimously that we will terminate the employment of Billy Hunter.”

It was a move that most people felt Fisher made to save his own bacon, because the executive committee had wanted him out since 2012 for failure of duties, following the 66-game NBA lockout and an agreement that left the players feeling bamboozled.

Fishers internal struggle with Hunter for power impeded his ability to represent the players effectively, which eventually led to the arrival of Chris Paul into that position. 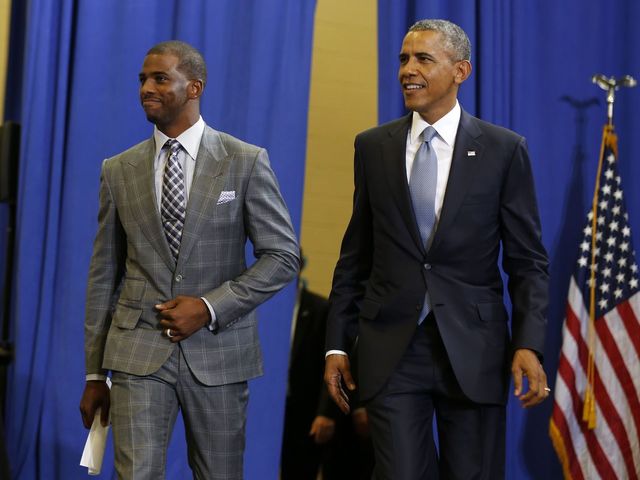 She let it be known immediately that she was here to serve the interests of the players and make sure they get their just rewards and are treated with dignity and respect by ownership.

The marriage of Paul and Roberts, formed back in 2014, has had an influence on the NBA and the way the players approach issues that not only affect them but their families, communities and overall health of our country.

That, combined with the recent video-recorded police killings of unarmed black men over the past few years has further inspired the NBAs elite superstar to break the MJ mold of make baskets, not statements on social issues you cant change with a dollar exchange.

NBA players have become more vocal, while fighting to create some financial leverage for players and helping future generations of players understand their true power and market value.

That new player-first philosophy is what’s up. It’s one that seeks security and concern for current and former athletes who have been used as money machines and discarded by the League with no financial basket or preparation for the next phase of life.

Some eventually fall into financial ruin and drug abuse or criminal activity, some incur hefty medical expenses. We have seen this too many times. The average NBA career is a bit over four years and then life begins. Thats why one of Roberts first moves as NBPA pit bull was to institute a cardiac screening program for retired players and other initiatives designed to prepare current players for life after basketball and provide opportunities for retired players.

“I couldn’t be more proud of Chris, our Executive Committee and our entire membership,” Roberts told NBA.com. “Providing health care security for players who came before them has been on the players’ minds for the past year and they worked closely with us to make it happen.”

Looks like the NBA is fertile breeding ground for change and fixing mistakes of the past. The players seem to be leading the charge on every significant legislative, social and financial issue and they are about making significant change in the philosophy of league ownership and player relations.

They are finally understanding what “take care of your own” means.