I’ve had the honor of interviewing legendary Hall of Fame Sports Photographer and New York Times best-selling author, Andrew D. Bernstein (the creator of every classic NBA photo captured in our lifetimes) on several occasions over the past five years.

The 2018 Curt Gowdy Media Award winner is in his 38th year as the longest-tenured photographer for the NBA. He and his company, Andrew D. Bernstein Associates Photography, Inc. are the team photographers for the Los Angeles Lakers, Clippers, Kings and Sparks and he holds the position of Director of Photography for STAPLES Center and Microsoft Theater L.A. Live.

And he’s preparing to resume his career as one of the few photographers allowed to work inside the NBA’s Disney bubble. Andy’s photography has appeared in thousands of newspapers and magazines worldwide.

There’s not a significant NBA moment in the last four decades that Bernstein hasn’t captured.

As the 62-year-old prepares to embark on the most unique, risky, regal, and unprecedented gig of his 45-year career, The Shadow League was fortunate enough to catch up with the NBA’s highest-ranked eye in the sky.

Andrew Bernstein: This is the most unique situation that any of us have been in. I thought I’ve seen it all from the Dream Team to International Tournaments and Olympics… covering Basketball Without Borders… but nobody was prepared for this when everything shut down on March 11 because of COVID-19 pandemic.

The NBA has been very selective and restrictive as to what media can enter the Bubble. Don’t think they are allowing any photographers other than us, who work for the NBA. Social distancing is paramount so they don’t want players close to us or us close to them.

We have to keep our distance so however, that translates to our coverage on the court I guess I’ll find out once I get down there or from my friends and colleagues who are already there and going to start shooting games at the end of the month.

I’m thinking we won’t be on the court, but a little bit off the court. We normally sit very close to the players and the League doesn’t want players falling on us and all of that stuff. I’m just glad and grateful I’m one of the guys they wanted to be there.

The last time I spoke to Andy he was just starting his podcast, Legends of Sport (LOS), now in its third season. LOS has 75+ episodes and over 400K downloads and has welcomed notable guests including Magic Johnson, Tony Hawk, Hope Solo, Pau Gasol, Doris Burke, and late basketball icon, Kobe Bryant.

Through a co-production deal with the Los Angeles Times, Andy is launching an upcoming series, Restarting The Clock, which will dive into the return of the NBA.

Legends of Sport: Restarting The Clock

Andrew Bernstein: We had been in conversation with the LA Times for maybe 6 to 9 months about a co-production and distribution partnership and when the COVID-19 pandemic hit, we had to put the breaks on it. We were eventually able to finalize the deal in May.

Setting off the partnership, we are doing a 16-week block…a  weekly podcast under Restarting The Clock, and each week of the 16 weeks we will cover the return to play of the WNBA and NBA and continue each week through the NBA Finals in October.

Each week has a theme of what is going on in the bubble, but with our legendary slant to it. Not going to be a reporter on the ground or talk about what’s happening day to day per se, but the Bubble is the vehicle for us to get our Legends word out there and involve legendary broadcasters, athletes, coaches, NBA people as well as journalists who are actually inside the bubble. There’s a lot of cross-pollination of what we can do.

Most recently, Bernstein’s work appeared in the widely acclaimed ESPN documentary, The Last Dance, and diehard fans recognize him from frequent appearances on ESPN’s SPORTSCENTER and The Jump.

Andrew Bernstein: I loved watching The Last Dance and all the friends and colleagues I worked with. Saw young me pop in and out of it. Some of my kids were texting me and they got a kick out of it. It was well presented and well done and it really left no stone unturned on that thing and Michael was very forthcoming.

I was pleasantly happy that he was so forthcoming. It showed the sides of him that a lot of us maybe had seen behind the scene and most of the public hadn’t. It was great to relive that era and I obviously had been there since his rookie year and was there for his entire journey when he won his first championship in 91 and all six total.

They highlighted a couple of photos that really meant a lot to me, the one of him with his first trophy and his Dad which I know is one of his favorites and one mine.

Also the photo of his last 0.6 shot against Utah where they kind of broke that photo down, that was a very special photo all of us who contributed to making that happen, it was a real group effort from all of us at NBA photos

Bernstein created and co-produced THROUGH THE LENS for Spectrum Cable SportsNet, which hosts discussions with notable Lakers and NBA personalities via his iconic photographs.

After accumulating over 14,000 photos of Kobe Bryant, from capturing The Black Mamba’s first media day with the Lakers in 1996 to his 60-point exit explosion in his final game against the Utah Jazz, Bernstein teamed with Kobe for a book titled The Mamba Mentality: How I Play. The book follows Kobe’s journey from his early years as a rookie with the Lakers to his last season.

There are few people in the media who know more about Kobe Bryant than Andy. 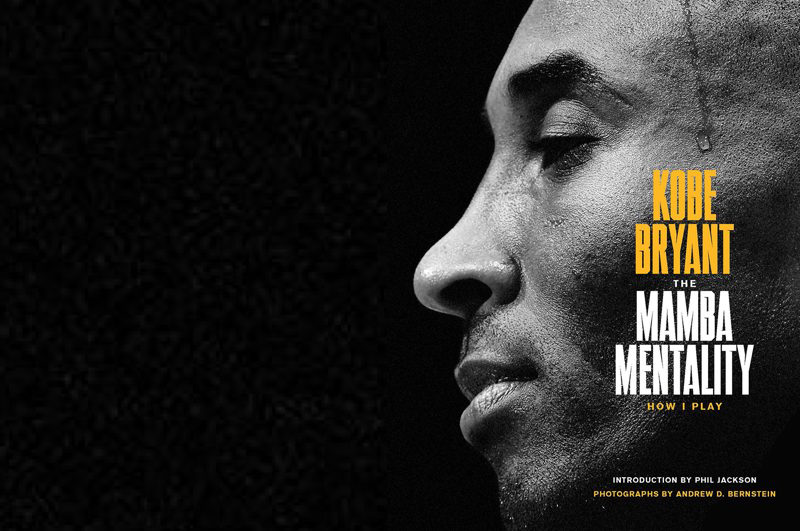 The Mamba Mentality offers readers an exclusive, inside look at Kobe’s Journey.

It was a gigantic shock that came from nowhere. I had just seen him less than a week before that. He and Gigi were at a game and you never expect anything like that to happen to anybody but especially somebody who has that superhero aura about him. It just blew me away.

Just to compound it, losing her and seven other people, there are no words to describe it. The grief will always be there there will always be a void there. We just feel really robbed of someone who was important for all of us.

There was a lot planned; a statue dedication and his Hall of Fame enshrinement was supposed to be this August. That was the second death in that month because David Stern died right after the first of the year. We were still dealing with that situation and losing him. Losing David was a huge blow to all of us who grew up under his tutelage and working for him and I really felt he was somebody I loved dearly. That was really sad as well and then to get hit a few weeks later with Kobe and Gigi it was really too much to take.

Looking On Bright Side Of the Bubble

I’m trying to see this as a unique adventure and situation that I’ll always have stories to tell. I have no concerns about once I get there that there will be health issues if everybody obeys protocols and we get tested. They’ve thought of everything that could go wrong and prepared for it. I try to be an optimist by nature. We have to go through a week quarantine once we get there and all that stuff.

Bernstein says his main concern is being away from his family for so long. He’s never left them alone for this amount of time.

The actual commercial flight to get there is his second concern. The health risks involved with traveling is something he has considered.

“Trying to be prepared for that,” Bernstein said. “Have my mask and my visor and the whole thing. Just get from point A to point B and be healthy and get to work.”