Now that Chris Mullin has the reigns and holds the future of NYC college basketball in the same hands that used to hit effortless jump shots and make ridiculous passes, he needs to pick up the phone and call the father of senior point guard Marcus Lovett Jr.

I know you had to run that clip back about three times to see if you were watching a throwback And 1 Mixtape or not.

That was Morgan Park High Schools (Chicago) Lovett Jr., the most underrated basketball gem on the planet. The kind of bonafide star thats somehow still unsigned for next basketball season, despite a legion of suitors.

If Mullins hands are full with carpeting the Queens castle and working out his staff situation, then the recruiting guru he just heisted from Iowa State, fellow Brooklynite and St. Johns alum Matt Abdelmassih should be hitting up the LoVett crib any minute now.

My eyes and biblically reliable basketball sources tell me LoVett is the best point guard coming out of high school and if you put him on one of the NCAA Final Four teams today, he would change the complexion of the roster.

To top it off, I spoke to his dad yesterday and Junior, who is getting recruiting by Kansas, Memphis, Illinois, DePaul, Georgetown and Georgia Tech, wants to take a bite out of The Big Apple. Are you kidding me?

His pops, Marcus Sr., is actually wondering whats taking Mullin so long to reach out and tie a bow on this perfect East-West coast union. Anytime you hear LoVetts name mentioned, St. Johns is listed as a suitor. It cant get any easier for St. Johns. Honestly, all Mullin can do is mess it up by not signing this kid.

LoVett was supposed to announce his decision in March. The fact that he hasnt done so should be an obvious sign that his family was waiting to see who emerged as St. Johns new leader.

Mullins arrival seems to be a deal maker for LoVett, who remains the top unsigned point guard in the country. His high school coach Nick Irvin says the only reason LoVett wasnt an All-American is because he didnt play too much on the revered AAU circuits.

Marcus and Brunson are the best two guards in country. His performances throughout his whole career have been phenomenal. I know he will be an NBA point guard one day. His talent is just off the roof.

He got robbed from the McDonalds game, Irvin said of his super-swagged out guard, who scored 45 points on 20-27 shooting in a tough Class 3A State Semifinals loss to Belleville Althoff. I think probably because he didnt play on the AAU circuit as much as other guys did. Some scouts were probably upset that he didnt play in the events they deemed as important and all of that.

Id have to agree. LoVett is the most dynamic guard Ive seen in high school this season. And hes the perfect fit for a St. Johns program that needs to make a splash not only by keeping NYCs elite talent at the crib, but with the ability to recruit rim-rocking ballers from other areas.

Big-balling is in the LoVett Family bloodline. Marcus family is originally from Fort Wayne, Indiana. They moved to San Gabriel Valley, Ca. when he was six years old. His dad played Division 1 ball at Oklahoma City University and won the 1996 NAIA National Championship. The LoVetts moved back to the Midwest for Marcus senior season and he tore it up for Morgan Park.

When I spoke with LoVetts Dad, he said the only market his son hasnt fully infiltrated yet is the New York market and they feel like the other major cities are cool, but The Garden, the concrete jungle, the gritty, flashy and creative brand of ball that symbolizes NYC basketball, still holds weight and has an appeal to them.

If Chris Mullin is a smart man, and I believe he is, then his first order of business will be to hop on a plane next week and head to Dallas where LoVett will be participating in an Adidas-sponsored AAU event, put the full court press on the diamond-studded guard and nail down his commitment to The Red Storm.

When I was watching LoVett, I thought I was looking at a NYC original floor general in the ilk of a Stephon Marbury, Dwayne Pearl Washington, Kenny Anderson, God Shammgod or Mark Jackson. You add LoVett Jr. to the Red Storm mix and Carnesecca Arena becomes “Ankle Break” Arena.

Hes prolific like that, Irvin told The Shadow League. Irvin says he thinks St. Johns would be a good fit and he is very familiar with the universitys former and current leadership. He sees LoVett as a no-brainer for Mullins system. Mully likes to run and shoot it and the point guard will be the focal point of that, Irvin said.

In times like this I consult the one person on earth who I truly can say knows more about basketball than anyone (Just ask Stephen A. Smith). The Global Man himself and my former radio partner Champ says, LoVett is the BEST POINT GUARD IN THE COUNTRY…. He got that thing on a yo-yo and hes a lefty like Mullin.

Champ says dont confuse LoVetts flashiness with being undisciplined. LoVett is a focused student of the game with a more than credible basketball I.Q. Besides, adds Champ, his jumper is already wet and most of those NYC point guards couldnt shoot. Marcus can shoot and hes only going to get stronger and better. You cant steal the ball from him.”

“Hes like a Damian Lillard or Steph Curry in that he is a stone cold stud who flew under the radar a bit,” The Global Man insists. “They both went to small schools. A lot of people didn’t get to see Lillard in high school because the AAU team (Oakland Rebels)  he played for wasn’t a big-time team. They both went to small colleges but still became NBA stars.”

Those guards used any perceived shortcomings as fuel for their drive to the top of the NBA food chain. Similarly, Marcus just uses it every day as motivation, Irvin insisted. Pound for pound he can match up with anybody.

The in-the-box thinkers loss is an opportunistic coachs gain. LoVett Jr. is harder to pick pocket than a greasy elephant on ice skates, he has a chip on his shoulder and he wants to be the rejuvenator and the centerpiece of a Big East basketball experience led by a Big East legend.

You have to recruit guys that want to carry that responsibility and buy into a lofty goal if only for one year. It still sets a tone.

The most important part of this entire scenario is that the LoVett Family is willing to embrace the challenge of rebuilding a dynasty at St. Johns and making the program relevant again, not just competitive as theyve been under Steve Lavin.

Marcus is probably a one-and-done to two-year point guard. So beyond being a great look for Mullin, he becomes an automatic attraction for St. Johns. In the mold of a real live, Big East ball wizard. His presence would give fans a reason to buy season tickets at Carnesecca Arena  again. Carmelo Anthony would finally have someone to share the Madison Square Garden spotlight with come Big East Tournament time.

Lavin brought the program back from the dead and now Mullin has to take it to another level. Its like taking over a new club. Mullin is the new owner and its up to him to make it a hot spot.

Mullin needs to bring in a statement player that is not only sickly talented, but fearless and has a basketball identity that embodies the original spirit of the Big East and the principles Mullins game was birthed on (which in essence are the fundamental life principles of legendary St. Johns coach, Louie Carnesecca). 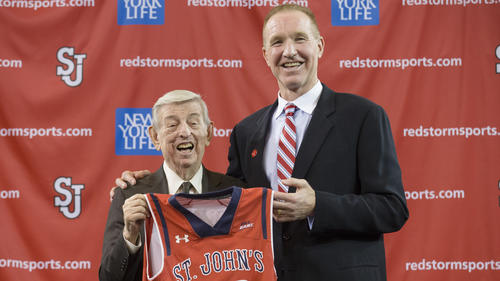 I did wonder why Mullin shunned NBA opportunities to return to a basketball program that had lost regal stature since he was last on campus as a dominant player. Then I remembered a conversation I had with Dan Sacco of the Joe Lapchick Character Foundation when discussing Carneseccas influence on his players.

It gives me insight into why Mullin felt like it was almost his ancestral duty to return home and rebuild the empire.

Lou followed Joe Lapchick as coach at St. Johns, so he had huge shoes to fill on a social and basketball scale already, Sacco said. When you think about the Big East and those early years, it was the coaches like John Thompson, Lou Carnesecca, Boeheim, and PJ Carlesimo that made the league what it was. The coaches became bigger than life itself.

To this day (90-year-old) Louie carries around in his wallet, a piece of paper that Joe Lapchick gave him and on it is a written  reminder about life, how you should look at things and keep things in perspective: Today a Peacock. Tomorrow a feather duster

Which means dont get bigger than who you are and where you come from, Sacco explained. Remember everything about life. It all has a place in your journey.

Mullin has shown that he understands those words clearly. Now he has to do whats best for NYC basketball and sign Marcus LoVett. Hes waiting on you Chris, but hes not going to wait forever. Dont make your first your move, your worst move. And definitely dont make it a move you didnt make that was sitting there like a skelly puck waiting to get plucked or a spanking white NYC train begging for a graffiti makeover back in the days.

Its not chess. Its not even checkers. Chris, go out and get the lethal lefty Marcus Lovett. A little birdie told me hes waiting on your call. Please dont drop the ball. You never did as a player.