The applause in the Ravens 2018 NFL Draft war room at their headquarters in Owings Mills, Maryland was a rare sight to behold. It’s not something that normally happens, especially after the first round.

But the man who was the recipient of the emphatic hand-clapping, General Manager Ozzie Newsome, is himself as rare as they come in NFL circles.

Newsome had just finished up on some of his trademark wheeling and dealing, moving back twice to secure two first round picks that would fill glaring needs in the team’s plodding offense. His first move brought in Hayden Hurst, a pass catching tight end from the University of South Carolina. But it was the second move that brought the outpouring of emotion.

In the Green Room, as fans in AT&T Stadium awaited the Philadelphia Eagles making the 32nd selection of the night to close out the first round, Louisville’s Heisman Trophy winning quarterback Lamar Jackson was somewhat despondent. His fly, green Gucci suit had been wasted, he thought.

Despite having one of the most incredible two-year runs for a signal caller in college football history, he had to deal with the antiquated prejudices that dynamic Black QB’s often face, with some suggesting that he switch positions if he wanted to play in the NFL.

Jackson was adamant that someone would give him the chance that he deserved. But as the Eagles were on the board to make the final selection of day one, he knew that with Carson Wentz and Nick Foles holding it down in Philly, his chances of being a first round selection were all but gone.

Until Newsome stepped in, swung a deal to get the Eagles’ pick and snagged Jackson as the Ravens quarterback of the future.

We got it done, Newsome told Bisciotti.

And as they watched Deion Sanders interview an elated Jackson for the NFL Network, after the selection was announced on a huge flat screen TV in their headquarters, the room grew silent.

Sanders suddenly paused the interview, looked into the camera and said, “Ozzie, man, I love you.

And that’s when the applause erupted.

It was merely an affirmation of the acclamation that fans of the University of Alabama Crimson Tide, the Cleveland Browns and the Baltimore Ravens have been exhibiting for over 40 years now.

In 1972, Newsome caught 80 passes and set the Alabama prep record with 20 touchdown receptions in a season as a junior at Colbert County High School, leading them to a state championship. The young man from Muscle Shoals also led them to a state title in basketball and starred on the baseball field as well.

The larger American sports populace became familiar with him during his record-breaking career as a tight end playing for Bear Bryant’s Crimson Tide, where he earned the nickname, “The Wizard of Oz.”

There were a lot of factors in my choosing Alabama, Newsome said in the book, What It Means To Be Crimson Tide. But unquestionably the number one factor was Coach Bryant. It begins and ends with him. Other schools recruiting me told me that their coach had played for Coach Bryant or had coached under Coach Bryant. And I thought, I could go to a branch of the tree or I could go to the trunk.

But let’s not minimize the burden he carried, and what he had to endure as a young Black athlete playing for the University of Alabama. The school had only signed its first African-American football recruit, Wilbur Jackson, four years prior to Newsome setting foot on the Tuscaloosa campus.

The state wasn’t far removed from Governor George Wallace standing at the door of the Foster Auditorium, attempting to block the integration of the university. There’s no telling what indignities and horrors Newsome’s parents and grandparents lived through.

The residue of Alabama’s despicable racial hatred, ignorance and terrorism – the Montgomery Bus Boycott, the Freedom Riders being violently attacked, the terrorist bombing at the 16th Street Baptist Church in Birmingham that took the lives of four innocent little girls, the sinister and vicious nature of Jim Crow, the atrocious legacy of Black lynchings – all of it was still reverberating, those deep wounds still festering when Newsome donned the Crimson Tide uniform as a freshman in 1974.

Bear Bryant’s depth chart, which wasn’t hamstrung by scholarship limits back then, was notoriously bottomless. Only the best of the best saw playing time, and for most it came years after paying dues in the suffocating heat, humidity and brutality of the team’s practices.

But Newsome’s talent was undeniable. He started as a freshman and every year thereafter, becoming a two-time All-SEC player and a consensus All-American as a senior. During his four years, Alabama won 42 games and only lost six. 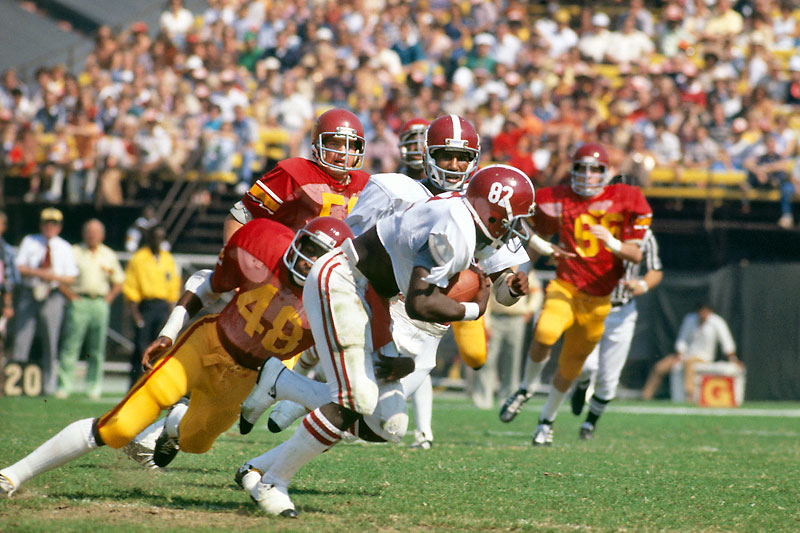 In a day and age where offensive play in the SEC was centered on the running game, he caught 102 passes for 2,070 yards and 16 touchdowns. The 20.3 yards per catch that he averaged was a conference record that stood for over 20 years.

He was named the Alabama Player of the Decade for the 1970’s and an eventual College Football Hall of Famer whom Bryant once called, “The greatest end in Alabama history…a total team player, fine blocker, outstanding leader, great receiver with concentration, speed, hands.”

Selected with the 23rd overall pick by the Cleveland Browns in the 1978 NFL Draft, Newsome is on the very short list of the greatest tight ends to ever play the game, alongside the likes of Tony Gonzalez, Antonio Gates, Shannon Sharpe and Kellen Winslow.

He endeared himself to Browns fans immediately, becoming the first rookie to be named the franchise’s Offensive Player of the Year in 25 years. In 1984, his 191 receiving yards in a single game set a franchise record that stood for 29 years. He set franchise records for receptions and receiving yards, was a beloved member of the team and the Cleveland community and was inducted into the Pro Football Hall of Fame in 1999. After hanging up his cleats, he worked with the Browns as a coach and scout. But team owner Art Modell recognized that his talents could be better utilized as an executive. From 1991 to 1995, he worked in the Browns front office, and came along with the team when they moved to Baltimore and were renamed the Ravens.

In 1996, overseeing the Ravens’ Draft preparation and execution, Newsome was responsible for putting the building blocks in place that would later lead to the team’s first Super Bowl title in 2001, picking UCLA offensive lineman Jonathan Ogden and Miami linebacker Ray Lewis with his two first-round selections.

In 2002, he was named the team’s General Manager, making him the first Black man ever to hold the title of GM in the history of the NFL. His acumen and accomplishments blazed a trail for Rick Smith, Jerry Reese, Doug Whaley, Ray Farmer, Rod Graves, Sashi Brown, Chris Grier and others to follow.

Newsome is retiring as the Ravens General Manager after this season. He’ll remain with the team in an advisory capacity, but he’s stepping down from the daily grind that has consumed many a man running an NFL front office.

It truly is the end of an era.

Since 1996, Newsome has built something monumental, something that brought pride to a championship starved city in need of a self-esteem boost as the architect of the 2001 and 2013 Super Bowl champions.

Former Ravens coach Brian Billick once compared him to John Nash, the Nobel laureate in economics who was the subject of the film “A Beautiful Mind”, because of his ability to absorb and sift through information, and to see and think the game in ways that others couldn’t quite comprehend.

Newsome is the only general manager ever to win a Super Bowl, dismantle and rebuild the entire roster, and win another ring more than a decade later. His work history, both in preparation and execution, should be the subject of a Harvard Business School case study. 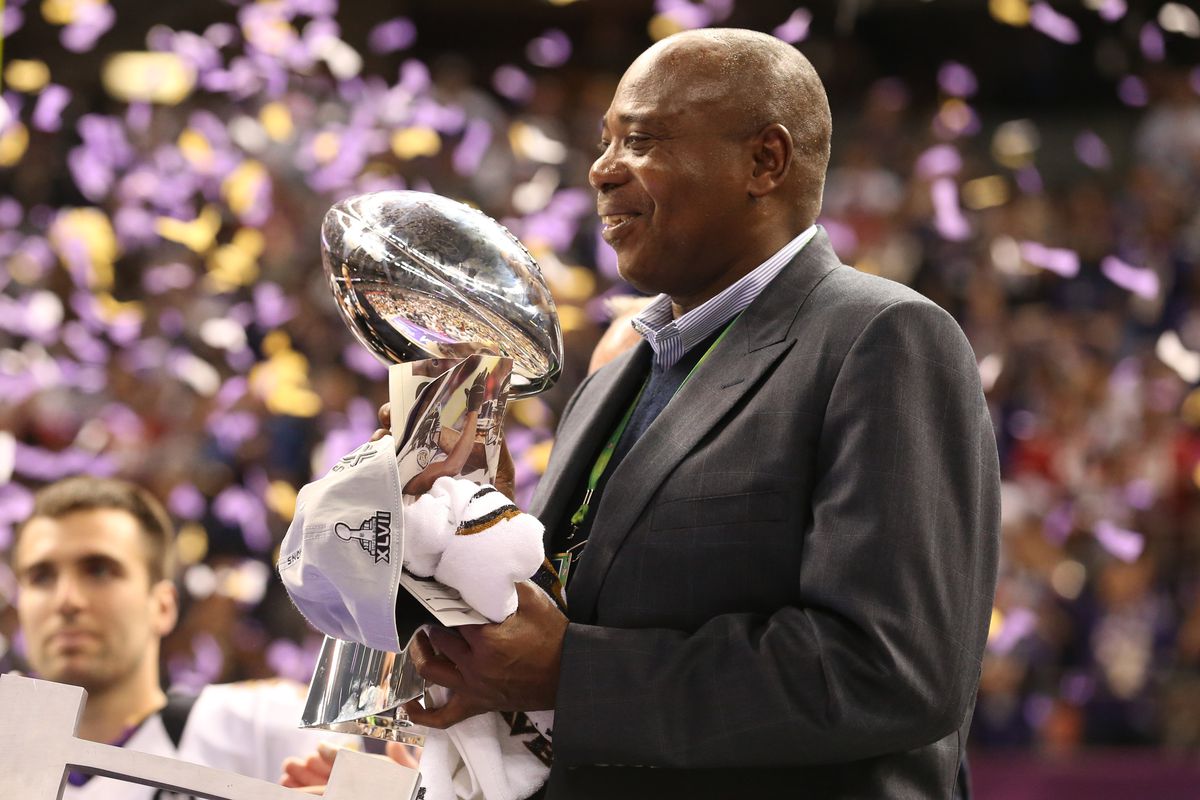 The drafts he’s overseen have produced 18 Pro Bowl players and two, Ogden and Lewis, that are currently Hall of Famers. Terrell Suggs and Ed Reed are certain to soon join them in Canton. The 22 players Newsome’s chosen in the first round have a combined 60 Pro Bowl invitations and have been named the Super Bowl MVP, NFL Defensive and Offensive Players of the Year and the league’s Defensive Rookie of the Year.

And through it all, the local media who’ve covered him over the years will tell you that he’s one of the league’s most accessible, down to earth and humble senior level executives.

After making the obligatory phone call to defensive end Zach Sieler of Ferris State, the team’s final selection of this year’s draft and the final one of his career,  Newsome received a protracted standing ovation from his colleagues.

Folks in Baltimore can hardly recall the man ever getting emotional. But the emotion was written all over the man’s face at the conclusion of the draft.

The Ravens’ only general manager in franchise history received a standing ovation and emotional hugs to cap off his legendary 22-year career.

“Yes, it was emotional. The kid [Sieler] told me he was going to make me proud. That was a good part of it, Newsome said minutes later at a press conference. Even though theres some finality with that, theres not finality with what Im going to continue to do as a Baltimore Raven.

Despite obviously referring to his role as an adviser to Bisciotti, Head Coach John Harbaugh, President Dick Cass, and Eric DeCosta, who will take the GM reigns at the conclusion of this season, Newsome could also be referring to something else.

Like Lamar Jackson, perhaps? Newsome has long been ahead the curve, considered by many to be among the smartest men in pro football.

That was one of the greatest moments that Ill ever experience in professional life, Harbaugh said of Newsomes last pick. The good news is its not really the end, its kind of the beginning.”

It’s the beginning of the next chapter in Ravens history. When Joe Flacco steps aside, the quarterback position will belong to Jackson, one of the most exciting prospects to ever come out of the college game. Evidently, many teams didn’t believe enough in him to invest a first round draft pick. But Ozzie Newsome and the Ravens did.

Theyre going to get a Super Bowl out of me, Jackson told Deion Sanders during that NFL Network interview just minutes after he was selected. Believe that. Believe that.

In Baltimore, fans of the Ravens have a saying: “In Ozzie We Trust.”

How dope would that be, given Newsome’s history, if his final draft set the stage for the city’s next championship chapter? Especially with Jackson at the helm as the quarterback of the future, proving all the draft experts and other shortsighted GM’s wrong.

For over 20 years, the league’s first Black General Manager has proven that he’s been among the game’s greatest. And over the next few years, we’ll see how his final draft manifests.

Given his resume, some special things should be in store in Baltimore.