A respected veteran NFL reporter revealed Wednesday that the NFL agreed to a deal where the Los Angeles Rams then St. Louis didnt have to do HBOs Hard Knocks series in 2014 if they drafted Michael Sam.

Sources say NFL agreed not to have Rams on Hard Knocks in 2014 if they drafted Michael Sam, Howard Balzer tweeted.

Apparently, a deal was struck for a staged selection, where the Rams would nab Sam with their final pick of the draft and in return, the NFL would make sure another team was picked to do Hard Knocks.

Sam was the first openly gay player drafted by an NFL team. The Rams, who will be featured in the HBO series this season, selected him in the seventh round of the 2014 draft. The impact of his arrival transcended football and he was immediately tabbed a hero for his courageous honesty.

The Rams were lauded for their inclusive posture and at the time, it was a major win for NFL public relations. Gay activists and gay rights groups finally had a league to put their mighty dollar behind. Problem is, it only lasted for a few months.

That in itself is absolutely absurd, its 100 percent incorrect, Fisher told ESPNs Mike and Mike on Thursday. I was really taken aback by those comments. Its insulting, from my standpoint, as it relates to Michael. We had three seventh-round picks. When we drafted Michael he was the best player on the board. Who in their right mind would think that you give up a draft choice to avoid doing something like that?

He continued, Its really unfair to Michael. Michael worked so hard.

Sounds good, but Sam himself tweeted Im not surprised at all, when learning about the reports. He had to feel like he was being exploited and used and maybe he even enjoyed it at first. But once the impact and usefulness of his story met the limits of his talent, he was tossed out of the news cycle like some dirty socks into the hamper.

In todays society, stories are written before they even play out. Everyone wants the hot microwaved garbage, instead of letting the story cook, so we can see what it really tastes like.

Such is the case with Sam, the former SEC Defensive Player of the Year who was all the rave back in 2014, when after being drafted he kissed his boyfriend on national television and basically told the outdated and uncomfortable members of the NFL community to deal with it.

The former University of Missouri defensive end never played a game in the NFL. He was cut by the Rams before the beginning of the 2014 regular season. He was then signed to the Dallas Cowboys practice squad for seven short weeks. He inked a deal with the Montreal Alouettes of the Canadian Football League in 2015 but eventually left the team for mental health reasons.

I guess this wonderful moment in American history ended up terribly for everyone involved because you cant contrive and create history. Truly progressive and historic moments happen authentically.

The NFLs media relations people were having a ball with this first gay player thing and anyone that dared to suggest that Sams homosexuality was actually helping him get opportunities that other players wouldnt get, was crucified and labeled as a homophobe.

At the time, a well-respected sports writer suggested that Sam was on the same level as Jackie Robinson. My repsonse was:

“With all due respect to The Obamas and others, comparing Sam to Jackie Robinson borders on absurdity. The major difference is that Sam didnt have to tell anybody he was gay, but Robinson couldnt hide his blackness with 10 pounds of baby powder. No. 42 also lacked the total support of MLB, its coaches, staff, media and most fans.

Robinson was in a pit of bigotry and maliciousness with very few supporters to draw strength from outside of blacks who loved baseball but generally didnt and couldnt attend games. Sam immediately had the support of most people and became an instant icon. That advantage mixed with his character security has elevated him to spokesperson status…however, he no longer owns his soul. Sams the property of a platform and a payday…” 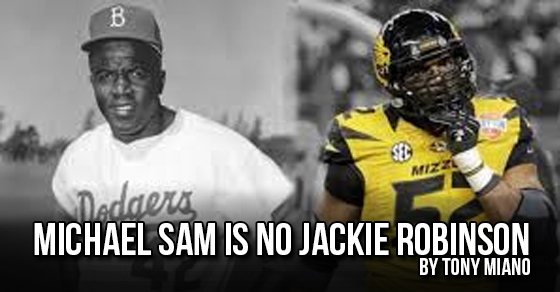 In retrospect, I actually overrated his lasting impact.

Most people were reacting to the moment and the significance of what Michael Sam represented. The LGBT community and thirsty media corporations furthered agendas by highlighting Sam and making him into somewhat of a cult hero before he proved his worth on an NFL field.

Before he proved he was the right person to continue the agenda. The ideal barrier-breaker would be a gay male who could ball at a supreme level, stick around and influence a change in attitudes on a large scale.

Being that Sam didnt even make the squad is further proof that him being drafted by the Rams was all part of some huge publicity stunt by the NFL and the fans are the suckers who got pulled into it.

There should be a lot of people feeling kind of used by the NFL today. The main person should be Sam, who says all he ever wanted to do was play football and rush the quarterback.

Unfortunately, Sam got caught up in something way bigger than himself, and the media machine and opportunists just took him along for the ride.