With all of the stars and future stars of mens boxing that were present in Gleasons gym in Brooklyn on Wednesday at the open media workout for SHOWTIME CHAMPIONSHIP BOXING (Peter “Kid Chocolate” Quillen vs. Daniel “The Miracle Man” Jacobs middleweight championship bout), Brooklyns daughter, Heather Heat Hardy was still among the most popular fighters in attendance.

As she stood by one of the dressing rooms (clad in a hooded sweat top cut just above her belly to slightly expose the tattoo located to the left of her stomach and above her hip and some skin-tight white biker shorts straight out of a 90s JJ Fad video, her hands wrapped for war and her face painted for the big screen) Heather wasnt trying to be the center of attention, but everyone that walked by or noticed her stopped to exchange pleasantries, shake her hand or do an interview.

Even me. I had to kick it with the Irish, blonde bomber if only for a hot second.

Sure, the cameras, suits and reporters were there for the main event boxers of Saturdays 10-fight Barclays Center extravaganza. Showtime will be televising the  Quillin-Jacobs fight and labeling it as a bragging rights rumble. However, Brooklyns brightest boxing star is Heat Hardy and her celebrity rises with every victory.

I interviewed Hardy back in July before she defended her WBC International super bantamweight title against Renata Domsodi and flattened the 40-year-old vet in six rounds. The Shadow League featured her in an Our Game 2 piece about her remarkable journey from the lower-income, edgy streets of Gerritsen Beach, Brooklyn to becoming the most notable face in womens boxing and a fan-anticipated mainstay on undercards at Barclays Center. Shes a single-parent mother and a survivor of homelessness and sexual assault as a child. If any woman boxer has the swag, the story and a reason to be a superstar, its Hardy.

Saturday’s boxing match will be the rising star’s fifth match at The Barclays and a second chance for Hardy to put the whippings on Bosques. In their first fight on May 29th, 2015 Hardy won by hard-fought split decision. It was her third fight at The Barclays Center and she fought valiantly through a wicked cut on her eye.

Bosques’ spilt-decision loss proves she has more than a puncher’s chance this time. Hardy needs this fight to continue making waves in women’s boxing,  but she wants to win emphatically, so shes abandoning any thoughts about future fights or endeavors and leaving that up to us journalists.

My technique is improving,” Hardy told TSL during our brief pow-wow. “I feel good. I really hate to have a fight coming up so close and look towards whats next. Anything I want to do next, I have to prove myself on Saturday first. When I get the win, we can talk in the post fight interviews about what I want to do next.

Right now, Hardy says her focus is on the challenge that is Bosques.

Everything about her concerns me, Hardy said. The girls a champion. She showed me in the first fight that shes not afraid and has no fear. I couldnt intimidate her. I couldnt bully her around. I beat her well, but it was a hard fight so I know shes going to come back and try to give me something harder than she did the first time. So thats what Im going to do too.

Hardy has been an outspoken proponent of womens boxing and very vocal about the fact that promoters dont offer women the same opportunities to be seen and capitalize monetarily. She believes that there is a market for women to headline their own major cards and fight in main events. Her growing popularity can be likened to that of MMA star and former champion Ronda Rousey. Win or lose, Rousey is now the most recognizable person of any gender in the sport and shes created a lucrative empire for herself in the process.

From a prior TSL piece on Hardy:

Hardy’s hustle has led to her distinguishing herself in a male dominated sport, where women still dont get a fair shake, or even a taste of the billion dollar pie like the MMA chicks are beginning to do.

Heather Hardy: I think in MMA we are seeing a huge rise in popularity in female fighters, and what the girls did with MMA and what Dana White did with UFC and Ronda Rousey…its kind of making a case for female boxers… that people are interested in female fighters and all you have to do is showcase that. I think what Ive worked really hard at is marketing myself and selling tickets and trying to get into the public eye, but again MMA as a whole is more popular than boxing. I think it’s just a matter of exposure, becoming part of the conversation and making people ask about you..you know ? 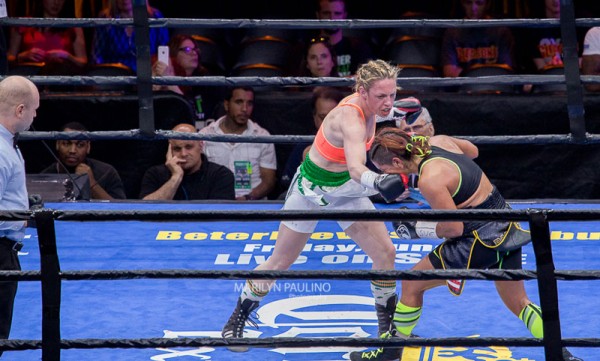 It might be Heathers time to ascend to that level of celebrity and another solid showing will help her in achieving that goal. The boxing world is warming up to Hardy’s sexy-tenacity. Her work ethic is gaining her praise and proving that she values her craft like any man would. She takes and delivers punches with the best of em’.

Her potential star power is on full display. She’s winning over former skeptics. Shes undefeated at 14-0 and has her eyes set on another World Championship bout. Some critics will say she hasnt fought that one goon who could do her like Holly Holm did Rousey and shock the sport while bringing even more attention to it, but for the time being Hardy is carrying womens boxing on her back and does deserve to reap some of the benefits of her diehard marketing, promotion and training — like the men do. Her time is right around the corner of the ring.