As the Hampton Pirates prepared for the start of practice in early August, no player was more eager to get on the field than redshirt sophomore running back Eric Carter. In the first quarter of the first game in 2015, Carter sustained a serious injury to his left knee, tearing all three major ligaments as well as the lateral meniscus.

I had a lot I wanted to do last year that I didnt get to accomplish because my season ended so shortly, Carter said. This year, Im going to show everybody what Ive got.

After spending all of last offseason preparing to be the Pirates featured running back, Carter finished the year with just six carries for 27 yards. His final carry, a 10-yard run, was his longest and he remembers it well.

I was running an inside zone to the right and I had broken free to the second level and I was about to get a first down, Carter said. Then another guy on the other team came in to help make the tackle and dived in head-first and put his helmet on my knee.

At first, we had just thought I had dislocated my kneecap and I might be out four weeks at most and be back to play [North Carolina] A&T. Then when I had the MRI, I found out all of the things that were torn. I was devastated because I had put so much work into the season and everybody was focused on me having a big season.

I put my mind to it and decided I couldnt let the injury hold me back, Carter said. I started pushing myself a lot harder and the rehab process started going a lot faster. Around the four-month mark after the surgery, a lot of people didnt know Id had surgery because of the things I was doing in the weight room. Unless I told you, you wouldnt know. 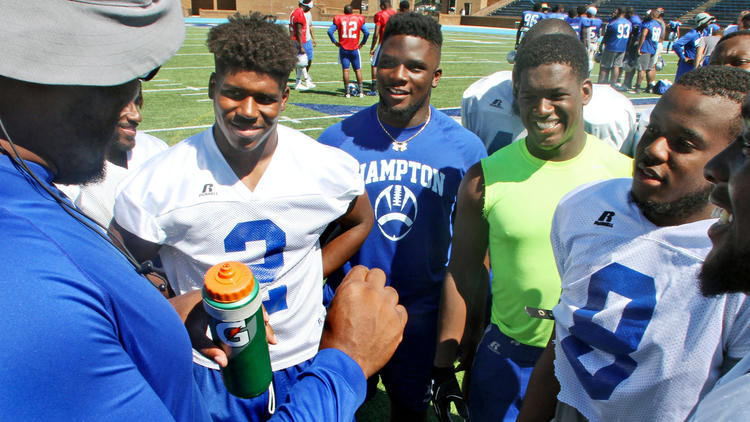 As a precaution, Carter did not participate in spring practice. Over the summer, he was able to participate in workouts as well as 7-on-7 drills and is now looking forward to the season opener on Sept. 3 against Old Dominion.

After the home opener on Sept.10 against William & Mary, the Pirates travel to Washington for the AT&T Nations Football Classic at RFK Stadium against rival Howard in the Battle for the Real HU.

Carter is looking forward to that game as much as any player. The revamped running back says he almost at full health and is ready to reclaim all the hope and optimism he had entering last season. This setback has only strengthened his will and broadened his physical limitations.

I feel like strength-wise, of course I kind of took a step back because of the time off and when I could not lift but Im right there, Carter said. I move a lot better than I did last year or in years before that because I put so much time into my knee and moving it around and cutting and changing direction. It will be a lot smoother this year.