Duke University shooting guard Grayson Allen has had an up and down season for many reasons. Though his play has fluctuated, his multiple tripping incidents is what has garnered most of the negative attention that he has received.

Allen averaged 21 points per game during the 2015-2016 season. That average dropped by a third to 14 points per game this year. Additionally, his field goal attempts, overall shooting percentage and minutes played are down as well.

Though his own actions are to blame for the scrutiny he has received, he’s still practically a kid at 21 years old. And kids make bad decisions. Recently, I spoke to basketball analyst and one of Duke University’s greatest players of all-time, Grant Hill. 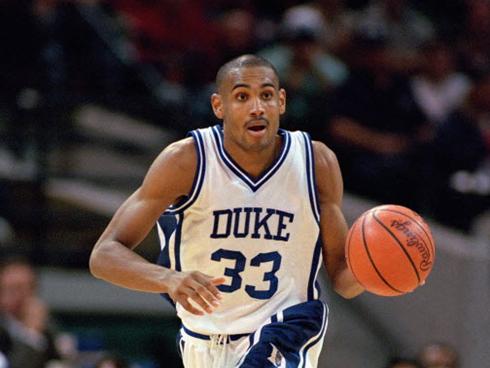 I asked him what he thought of Allen’s up and down play and what he felt maybe the cause of it.

“He’s been up and down. You said it best, he’s a kid,” said Hill. “I think a lot has been on his plate this year. He has made mistakes. I’m not running from that. But to be young and process that, I actually think at times he lost some of his aggression. That’s what made him great. He was always attacking.”

“Before he would just kind of go to the basket recklessly, and it worked. Then, after all these things happened, you start thinking, ‘Oh well, I don’t want to do anything that will bring shame.’ And what happened is that all the networks start looking at your every move. Like ‘Did he elbow him on purpose?’ I think you get to a situation where mentally you pull back a little bit. I think what makes him great is his aggression. I think he’s lost a little bit of that.”

Allen’s fluctuating production has resulted in the No. 2 seed Blue Devils being one of the most inconsistent big conference Final Four contenders entering the tournament. Luckily for the Dukies, sophomore Luke Kennard has stepped up as one of the premier scoring threats in the nation, freshman point guard Frank Jackson is emerging as a weapon and fellow freshman extraordinaire Jayson Tatum might be the most polished and complete player in the nation.

If senior Amile Jefferson can hold his own in the paint and if Allen re-gains the aggressiveness that makes him a certified weapon as a scorer, the Blue Devils could be primed for a long tournament run.