The series premiere of the long-awaited Batman prequel “Gotham” aired on Monday on FOX and the blogosphere is ablaze with opinions and criticisms. What kind of self-proclaimed comic book geeks would we be if we didn't put our pot on the fire in that regard as well? Comic book fans may fret and frown at this reinterpretation, but such rich characters and situations are seldom translated to television or film without significant change.

From the very beginning Gotham’s stylized skylines and scenes of dreary back alleys pulls the viewer in to a world that has been interpreted several different ways on the big screen and in comic books. Those familiar with the franchise know that a young Bruce Wayne becomes Batman years after witnessing the death of his parents during a mugging. But “Gotham” alludes to the killings as having been ordered by an unknown entity for reasons that have yet been revealed. This tale of “Who done it” is filled with nefarious and psychopathic characters, any of whom could have killed the billionaire couple.

The writers successfully create a world where no one is above suspicion and rookie detective James Gordon, played convincing in all of his fresh-faced naivety by Ben McKenzie, is the last line of defense against a world where every institution seems to be going to the toilet. Even his partner Harvey Bullock, played by Donal Logue, is on the take. The Gotham City Police Department is riddled with corruption and is controlled by the Falcone crime family, the entire city itself is divided between competing crime families.

We then find that the killer of the Waynes, shot dead almost immediately following the killing, may have been part of a grander conspiracy. Indeed, a mystery is afoot that will not likely be resolved any time soon. Though McKenzie’s rendition of Gordon is believable, with his air of righteousness and pointed skepticism, the characters that will inevitably keep people coming back to view “Gotham” week after week are the bad guys. The Falcone crime family, led by Carmine Falcone (played by John Doman) are charming and almost likable in all their murderous madness while Jada Pinkett Smith’s Fish Mooney is a monster who elicits fear from all she comes across and is maneuvering herself to be lord of the Gotham underworld.

Her one-time flunky Oswald Cobblepot aka the Penguin (Robin Lee Taylor) wants her out of the way permanently and becomes an informant for the police. But Mooney’s almost superhuman recall of people, places and facts allows her to see through the Penguin’s false façade and she punishes him with execution, which is to be carried out by the police. However, we all know that you can’t kill off a major Batman villain before Batman comes into existence. Cobblepot, thanks to the kindness of Gordon, is allowed to escape…and brutally murders an innocent fisherman simply to take his sandwich as his reward to kindness. His freaking sandwich! At the center of it all is a young Bruce Wayne, played brilliantly by David Mazouz. 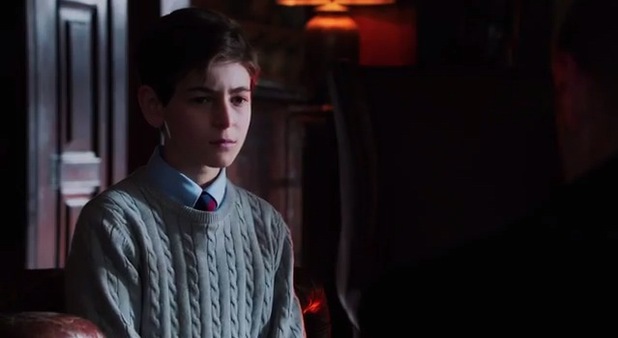 We begin to see his descent into the darkness from which Batman will emerge decades later. He is damaged and depressed, but a promise by Gordon to catch those responsible for his parents’ death is the only thing that keeps him going. One of the more enjoyable aspects of the debut was seeing realizing the future of each character as they appear. We’ll be glued to our television next week to observe the characters as they continue to grow and emerge. So far, so good. “Gotham” looks like a solid hit.