The death of the Republican Party has been greatly exaggerated.

Months ago, Rep. Keith Ellison, Democratic U.S. Representative for Minnesota’s 5th congressional district, told George Stephanopoulos and NYT reporter Maggie Haberman of Donald Trump’s momentum. They laughed a hearty, robust laugh. A laugh of hubris and pomposity. But America needs to listen to brothers more often, and this is yet another instance of such.

People terrified of the possibility of President Trump better vote, better get active, better get involved, he said prophetically. Because this man has got some momentum, and wed better be ready for the fact that he might be leading the Republican ticket,” he said.

“I know you don’t really believe that,” Stephanopoulos responded.

And on November 8, 2016, the United States revealed itself to be everything it says it is not. It has elected a caricature of a president in Donald J. Trump. 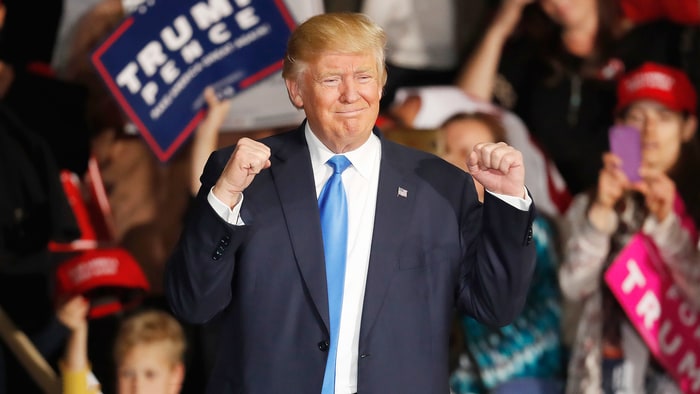 In doing so, it has spoken loudly.

It is the very same phenomenon that occurred during the administration of President Barack Obama with the obstructive behavior of a Republican-controlled Congress.

What was once thought to have been the fading sensibilities of old white males is in fact the prevailing mindset of half the country. The John Wayne mindset personified by a Trump presidency says we are half intolerant Twitter trolls and entitled chauvinists.

But it’s all saying that most white women are perfectly cool with it as 53 percent of white women cast their vote for Donald Trump. This, despite the “grab her p*ssy” comment.

However, as much as America unapologetically loves the actions of its forefathers in all of their racist splendor, it is completely in-step with the historic values of the United States of America. Currently, there are an untold number of Facebook posts that are pointing the finger at a multitude of factors in an attempt at placing blame upon everything except what it really is.

The entire time we always knew what “Make America Great Again” really meant. It meant that most of America was knowingly racist and willingly chauvinist, and that’s all it meant.

These election results mean a lot of things, but they don’t mean it was Black folks’ fault Hillary Clinton lost, it doesn’t mean that the Green Party siphoned off too many votes, and it wasn’t because Donald Trump is even close to being the best candidate.

The Trump win means a great number of Americans have balked at the idea of football protests, black activism and the very idea that a woman — even a white one with more qualifications — can be elected over a white male ringing the bell of racism and fear in America.

Throughout the presidency of Barack Obama I had written a myriad of critiques on his administration.

Though the reasoning was lost on many, I felt that it was my duty to do so. I was not willing to simply sing the praises of America because a black man had been elected president. Most of my critique was based upon the historic realities of being Black in America. Naturally my experiences made me sensitive to Obama’s legacy.

13TH, the critically-acclaimed documentary by Ava Duvernay, documented the manner that racism is kindred to the very idea of America. Though his successes as a world leader and president were apparent, and despite a myriad of positive overtures toward greater understanding made throughout his presidency, I knew Obama could do relatively little to reverse hundreds of years of institutional racism. Thus, at least from my perspective, his presidency would simply be a brief softening of oppression.

With America’s, “white-lash” as one Van Jones put it, we see a kneejerk reaction to the visions of inclusion and diversity that Obama’s presidency exuded. A presidential candidate that was endorsed by the KKK, various white supremacist groups, and who is alleged to have been involved with a minor, is president of the United States.

But while the world shivers, my confidence remains steadfast. Black folks in America have survived much worse. But, damn. I can’t say I’m not a little disappointed.

But I know I shouldn’t be. America can no more change her fiber than I am able to spontaneously convert my DNA. The Constitution, the National Anthem, and Donald Trump’s presidency prove that.