(Opinion) As an African American, one of the things I have always been most proud of is our history of overcoming insurmountable odds by any means necessary. Though our history has featured every type of resistance, from non-violent protest to acts of insurrection against slave holders, the most useful path taken in modern times has been non-violent protest as was practiced by Dr. Martin Luther King, Jr. However, with the absence of a unifying leader that people of African descent from various classes, ethnic groups and country of origin could back wholeheartedly, the spirit of the 1960s has largely gone unmatched for much of the past 60 years outside of several one-off affairs, such as the Million Man March of 1995.

The movement for the recognition of the rights of Americans of African descent has waxed and waned a great deal since those days of greatness that many of us have only come to know through history books and second hand tales.

Some in the community have even overtly doubted the effectiveness and necessity of protesting, yet these very same individuals are often at a loss for words when asked what they believe the solutions are. Analogous to a conversation with Kanye West, it's ultimately revealed that these people simply don’t have all of the answers and appeared to be talking simply to hear themselves talk. Meanwhile, we as a people time traveled further and further away from that the intellectual and philosophical examples that were set by the likes of Fredrick Douglas, Dr. King and Malcolm X, and the generational divide that separated the elders from their children’s children have become a visceral disdain that materialized between the groups. The youngsters got tired of hearing ‘Well, in my day…’ and the elders seemed more preoccupied with what the younger generation was wearing and the music they were listening to rather than the actual words that were coming out of their mouths.

In my limited experience (I say limited because there’s no way one person’s experience can be used to gauge the appetites of an entire group of people), the job of an activist requires passion, conviction, youth, funding and support in numbers. Without these qualities, the ability of an individual to protest is effectively dealt a crippling blow.

This is why it does my heart well to see millennials, the very same millennials whose music and style of dress I have lambasted and snickered at on numerous occasions, at the forefront of the charge against the recent state sponsored tyranny perpetrated by the police departments of New York City and Ferguson, MO in the shooting deaths of Eric Garner and Mike Brown. Mobilized by the grand jury decisions not to indict in both cases, Generation M seems to have finally accepted its calling and picked up the baton that many in my generation relinquished in favor of jobs, children and the fear of our personal lives crumbling around us. We became distracted from the beautiful struggle by participating and perpetuating the very Matrix whose deficiencies we were all too familiar with. So thank you Generation M for picking up the fallen baton. Additionally, thank you to those veteran Generation X activists who struggle through financial hardships to keep the flickering flames of our ancestors’ consciousness alive and well through turbulent times and blustering opposition. You have lived the lives of gypsies for justice, roaming the country to march and be heard whenever an injustice rears its loathsome head. Thank you for not giving up and quitting. Thank you for setting an example for the younger Generation M and thank you for not allowing the malaise of our parents’ generation to infect you into domestication.

I would be remise if I did not mention the scores of young and middle aged White Americans who have been newly awakened to a truth that many within the African American community are born into, the knowledge that the entire social system in the United States is built on racism and that the only way we can beat that back is by all Americans speaking up and making their voices be heard. So a special thank you goes to all of you who let rightousness and justice surpass skin color. 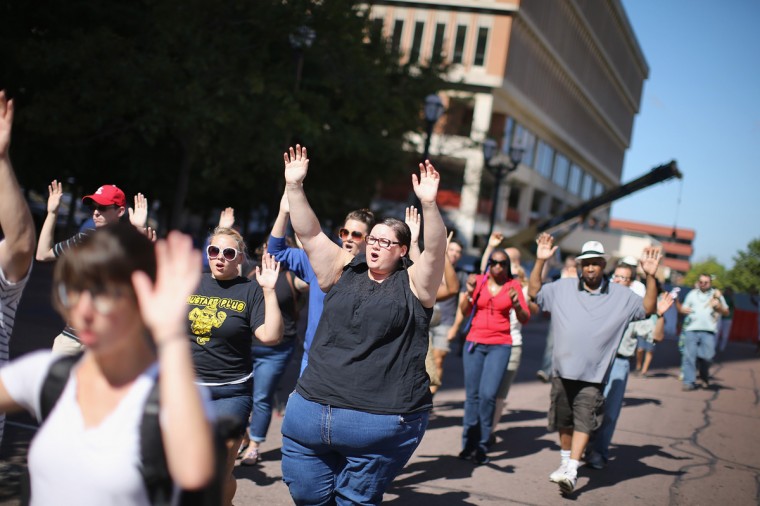 Lastly, I would like to give a special, special shout out to the aging children of the 60s who have been doing this activism thing for the better part of 50 years and have shown no signs of chill in their personal constitution. Though many in my generation have questioned your methods and willingness to share power, your intentions have proven pure and your resolve has stood the test of time.

So in the spirit of the holidays, justice and the struggle- thank you. Thank you all, and peace to the Dream Defenders.