The Shadow League told you a few weeks ago that UConn was a team of destiny but Dawn Staley was the embodiment of womens basketball. We also told you that all South Carolina needed was a break and they were the team most likely of winning the chip if UConn, by some miracle, failed to.

I wouldnt have given South Carolina a shot in the world to beat UConn. But beating Mississipi State 67-55 in an all-SEC title game on Sunday was almost inevitable after the Bulldogs spent every ounce of championship magic they had by symbolically winning the chip already with a Final Four win over the Huskies.

It was the third title game featuring two SEC teams since 1996, but the first championship in South Carolina history.

Motivated by the memory of her grandmother,  A’ja Wilson scored a game-high 23 points to go along with 10 rebounds and was named Most Outstanding Player of the Final Four.

And her coach, Dawn Staley was the driving force behind her development as a player.

Not to be lost in the glory of the evening is the fact that Staley is also the second African-American female woman’s head basketball coach to win a title. She was compared to John Thompson Jr. by one reporter and asked about the significance of her accomplishment as it pertains to diversity and barrier-breaking. Most specifically, whether or not athletic directors will now be more receptive to hiring African-American coaches.

“I’m not one that looks at race,” Staley replied. Basketball has been faceless and colorless and genderless. I grew up in a city where guys allowed me to play and hone my skills as a basketball player. Athletic directors need to hire who’s best for them.”

In 2011, the fans voted Staley one of the Top 15 players in WNBA history. Staley was elected to the Naismith Memorial Basketball Hall of Fame in 2013 and in 2017 she has womens college basketball talking about a team other than Connecticut. She finally gets the title that she’s been chasing as a player and coach since she was 18 years old. 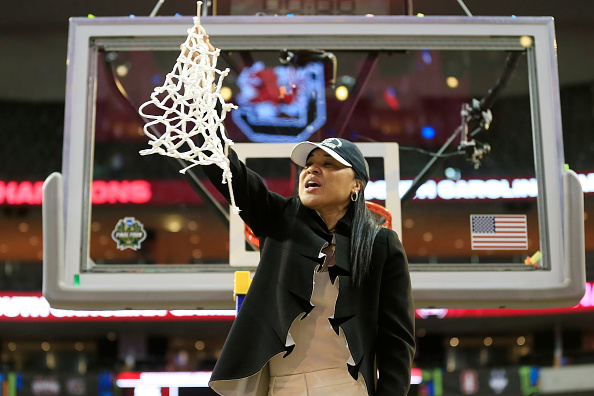 When she took that program she was taking a huge chance and a belief that South Carolina could win a national championship,said basketball analyst Nell Fortner. She had to sell her recruits and sell to her fans… but shes been there..shes gone out and done a great job of selling her program.

As Staley cut the nets and raised them above her head, she shouted, Hell yes…Hell yes