One of the simplest forms of kickstarting ones writing process is to ask a basic question, then answer it by way of storytelling.

For Kwanza Osajyefo, the question was simple: In a world that already fears and hates them what if only Black people had superpowers?

The books protagonist is a young man named Kareem, an otherwise nondescript young brother who realizes he has superpowers after he survived multiple gunshot wounds from the police. That, in and of itself, is heavy enough considering the current sociopolitical atmosphere.

But this book gets deep into all sorts of things; police violence, institutional racism, nonviolent protest versus violent resistance and the distrust that younger generations often have of their elders, among others. These are but a few meticulously laid diamonds of negritude that permeate the entire series.

Its been about two years that Ive been attempting to track down Kwanza, but I finally ran into him at the Black Comix Expo in Brooklyn about a month ago. I was eager to hear him describe how the inspiration for this brave, gut-wrenching and redemptive offering came about.

My first job right out of college was digital marketing at Marvel, said Kwanza. From digital marketing I wanted to move over to editorial. Then, later on, I worked at DC for six years. The space between working at Marvel and working at DC was about a decade, but one thing I noticed is there was a lack of black people working at these companies in positions that really dealt with the content that they put out.

As someone who was a fan of books from people like Milestone, and by the time I got there Milestone had gone to the wayside, it became very clear why there was a lack of black representation in the books, and a lack of authenticity to the characters that were there.

“I really realized that unless there was somebody of agency or influence working in the upper echelons of these places, you were not going to see these types of characters on the shelves.

The Shadow Leagie: And why do you believe that is?

Kwanza Osajyefo: It wasnt necessarily Machiavellian, I just think that when people think of racism, they always think of the aggressive form. The cross burning on somebodys lawn or something like that. But, systemic racism is something that is pervasive and has a number of subtleties. To an extent, nobody is actively supporting it. But, also, nobodies actively weeding it out either.

TSL: A comic book where only the black people have superpowers, you can, and do, say a whole lot about our contemporary society.

KO: So, I wanted to put stories out there that came from a black perspective and that have context to them. Some of the characters, when they became color aware in the story, it didnt really add much to the story, it may have added something for the reader because Spider-Man is black all of sudden, but in the story it was kinda not even a point. You know, they lived in these real awesome utopias where the color of their skin didnt really matter. The other part about it too, growing up as a comic book fan, all these comic books play on the outsider troupe.

TSL: The outsider troupe has been used extensively but none are more famous than the X-Men.

KO: Even though characters like the X-Men are considered these outsiders but theyre in a society where there are other superheroes, so doesnt really make any sense that theyre considered outsiders. Theyre mostly attractive white people and it didnt, to me, parallel the real subject of discrimination. Especially in America, and especially relating to race. No one is pulling Wolverine over because he has a nice car. No one is rejecting Jean Greys resume because her name sounds too ethnic.

So, I really wanted to scrape away the veneer of that outsider troupe and write a story that had that context to it. Like, lets not try to mince words here and make it a palatable version of discrimination that we grew up with. Those are just the inspirations for Black. It was just a culmination of my experiences. Seeing how the industry works, seeing how that effected content, I really wanted to tell a story that reflected what I felt was part of the black experience. 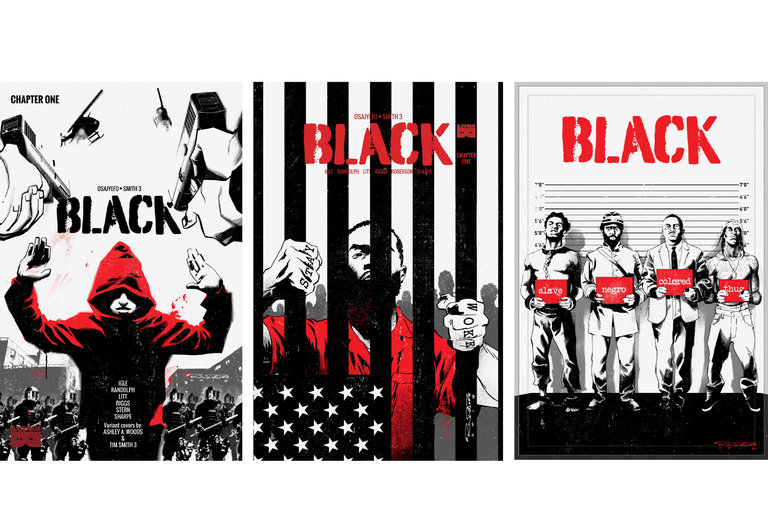 KO: That was important too because, again, going back to when these types of characters appear in other stories, they lack context, but they also lack depth. Because, very often, the only character of color in a story or on a team is going to have to be this kind of cookie-cutter, two-dimensional character whos inoffensive but is supposed to carry the weight of all blackness in some regards.

So, you really dont have the freedom of storytelling to cram all the different types of things that make up being black people. All the different perspectives, whether they be political, religious or sexually. Were not just one type, were not this monolithic group of people. So, it was very important for me to try and reflect what I feel like any black person knows of their own family. You got your ratchet cousin, your bourgeoisie aunt, you got your conservative uncle.

TSL: There are also dueling dialectics amid the heroes as well.

KO: I think this is a very sensational, superhero kind of way of highlighting what I kind of see, broadly, and thats black survival. Each group sees it different. Some groups believe the best way to survive is to go on the attack, while others believe the best way to just survive is to lay low.  We have militants, we have pacifists in our culture and I felt it was important to show that contrast.

I dont want to paint things in black and white colors. Most people who we may otherwise think of as villains just think that theyre right.

TSL: The cover art for these books was amazing. I was blown away.

KO: Well, when I originally began working on this project, and started working with Khary Randolph, everybody knows his work. Its energetic and a lot it has this sort of kinetic style. I thought that would help the covers, and I was looking for something more reflective of the content.  He didnt tell me what it was. He just said Im gonna try to do something different. He came back with that first cover and that just absolutely set the tone.

We were inspired to continue that. So, each of the following covers kind of represent themes that are already in the book. With the first one, it was definitely appropriate seeing as though we were dealing with police violence and the state-sponsored murder of black people, the second one was just highlighting the history of state on black violence with a cover reminiscent of Strange Fruit. We just wanted covers that kind of defined this narrative of blackness that would also be engaging, and people would stop by them when they walk in the store. TSL: Why is your protagonist as hopeful as he is at the end of the story arc?

KO: With Kareem, I wanted to show a very real and relatable young man of color, but also one who doesnt let the circumstances of his life change who he is as a human being. Thats his challenge throughout the story is to decide what is the right course of action. Ultimately, in discovering these powers that he doesnt really, truly understand, he continues to still be a better person. Even though he has the ability to change the world, perhaps in the wrong way, but he chooses to say, Im going to be the one with the target on my back so other people wont have to worry about it.

He isnt going to be a Malcolm X or a Martin Luther King, Jr type of character where, when we lose them we lose a little bit of hope.  Hes saying, I will be here and they cant take me away!