We often hear the phrase, “You never get a second chance to make a first impression.”

However, in some cases first, second and third impressions are vastly off base. Such is the situation with former New York Knicks star Charles Oakley. Not long ago, the role of the power forward was to rebound, defend his position, impose himself physically in every aspect of the game and to stand up for the team’s superstars, who were often smaller finesse players.

The late, great New York Knicks Hall of Famer Dave DeBusschere was the muscle for small forward Bill Bradley, while Oakley filled this role for Michael Jordan with the Bulls, and later was the heart and soul of several championship contending New York Knicks teams.

The classic enforcer mode was one that Oakley took to with vigor. Since his playing days ended in 2004, he has been very critical of team management and ownership on numerous occasions.

This didn’t go over well with ownership. It appears Big Momma was wrong about words never being able to hurt us, as opposed to sticks and stones. Because team owner James Dolan got all up in his feelings when he felt that Oakley was demonstrably heckling him at a game in MSG this year. 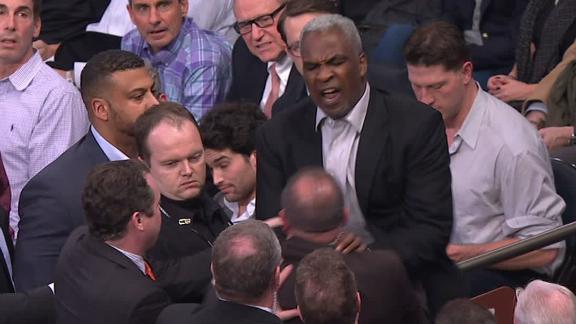 Dolan was sitting two rows away from Oakley. However, Oak later said he didn’t realize Dolan was even there. We all saw one of our favorite Knicks dragged out of the Garden by security and law enforcement in the aftermath.

When initially asked to leave, Oakley was visibly offended by their overtures and even mushed one of the officials in the face. During a recent interview with the Associated Press, Oakley reportedly said he wouldn’t change a thing about his behavior that fated evening.

“I would have done everything just the same way,” Oakley said. “I didn’t do nothing. I was only in the arena five minutes. I didn’t know you could get in that much trouble in five minutes. I’d take my chances and do the same thing again.”

Oak is due to appear in count on Tuesday. His MSG ban was lifted after a meeting between he, NBA commissioner Adam Silver and Dolan.

However Oakley has repeatedly stated that nothing is settled. What will it take to reconcile?

“That’s the million dollar question. I don’t know,” Oakley said. “Right now, we’re trying to get closure. Why was there a ban? Why do I have three assault cases? I want to get all that settled. That’s the most important thing right now. It’s not about the ban or going to the Garden. It’s about going to the next step.”

According to insiders, Oakley was no longer given complimentary tickets to games or official team functions, though he did attend on occasion on his own dime prior to the altercation. Initially, Dolan even suggested that Oakley was a ticking time bomb.

That claim was roundly refuted by former coaches and teammates alike. However, he did show umbrage at former New York Knicks teammate Patrick Ewing not coming to his defense.

“I’m not nervous. I believe in myself. They said this, they said that. But 20,000 people were at the game. Millions of people saw what happened. There’s no reason for me to be nervous. If I’m wrong, I’ll take my punishment,” said Oakley of the pending court date.