We pay homage to the underappreciated gem that was A Tribe Called Quest’s last epic album.

Little did we know that as Wu Tang dropped the groundbreaking, breathtaking and influential album Enter The Wu Tang (36 Chambers) and forged the beginning of a grimy, gutter rap era draped in philly blunts, 40s, Colombian drug smuggling, five percent nation elevation and project wars, A Tribe Called Quest’s chokehold on the mainstream market was loosening, caught between a transition in the culture.

Today we celebrate the 25th anniversary and re-release of Midnight Marauders, A Tribe Called Quest’s last epic album and the last time that the group would produce a body of work perfectly embodying everything that Q-Tip, Phife, Jarobi and Ali Shaheed Muhammad represented at the peak of their legend. The album will be re-released with a capsule collection.

“Midnight Marauders is the quintessential masterpiece in A Tribe Called Quest’s legendary catalog, ” Q-Tip told BET.  It is an album executed on the basis of precision and substance being placed at the forefront of its palette henceforth the reason for its staying power 25 years later.”

The year 1993 was a watershed moment in Hip-Hop. The music was as diverse as it had ever been. The sound, once dominated by the aggressive diction, word play and vivid storytelling of the East Coast, was becoming fully infiltrated with power brokers from the West Coast, South and other areas across the nation who were eager to put their own cultural touch on the genre and establish their hood as major players in an evolving and expanding genre.

We could list at least 40 albums from ‘93 that influenced the culture. It was the beginning of a five-year golden era of rap music.

Gangsta rap was in full swing, having tasted the militant, addictive deliveries of NWA, Snoop Dogg, Tupac and the like. The smooth criminal, gentleman thug movement was emerging as Puff Daddy and Bad Boy was about to rock the game. The pimp talk was percolating in Oaktown, but despite the way hip-hop music was expanding and transforming and evolving, there was still a market for the lyrically proficient, smooth artists such as Digable Planets, Roots, Souls of Mischief and rap legends ATCQ, who went against the gangster, misogynistic grain, often speaking on old fashioned Black love.

Unfortunately, as incredible and timeless as some conscious era rap artists have proved to be, back then, anything that didn’t include the obnoxious, aggressive, gun-toting, crack-pumping imagery that had come to represent life in the urban jungle, flew under the radar as far as appeal to the younger kids, as far as marketing, video shows and album sales were concerned.

The musical landscape was changing and little did we know, just a few years away from erasing conscious rap that was drenched in positivity and empowerment from the map.

Midnight Marauders was ATCQ’s farewell to Hip-Hop as we knew it at the time. It represented the height and descent of their immediate cultural influence. It was a total musical ejaculation of incredible samples and enchanting soulful street production, laced with black revolutionary diligence and a call for unity finessed by Q-Tip.

Phife Dawg was preaching from a pulpit that stretched from Queens to Atlanta back out to London, Sweden and Brazil. He was spitting a mosh pit of comical, serious and clever lyrical ether and performing at the top of his game, emerging as one of the most popular and uncompromised hip-hop artists in history.

The short PSA announcements in between songs were as impactful, creative, intellectually gangster and Black as the spirit of the music. No two songs sound alike and the entire album plays like Tip and Phife hopped in a car at the Daytona 500 and pushed it to the max until the tank was on E.

The album’s artwork is also a captivating and memorable aspect of the project, pasted with the headshots of hip-hop’s elite influencers, movers and shakers at the time, all wearing headphones. There’s also the symbolic colors of Africa — red, black, green and yellow — painted on a silouette of a black woman. It captured the artistic mastery, originality and abstractly ghetto, unified thought process that drove the ATCQ movement.
To think that Tribe was actually able to top the immortal The Low End Theory album is incredible, but they did. The Low End Theory merged hip-hop and jazz in a way that hadn’t been done before and, in the process, sparked an entirely new sound that’s been emulated ever since.

Midnight Marauders probably won’t have the same historical acclaim as The Low End Theory because  it coincided more with the times and Tribe was still setting the musical foundation for the genre and future artists. With that being said, the true test of a classic album is whether or not people will still listen to it 25 years from now. And Midnight Marauders has passed with flying colors.

At the time, once the NY market and the radio stations and top video shows started getting saturated with out of town talent, Tribe’s music was still revered but lost its commercial touch, as mainstream music assumed the violent and lascivious identity of harcore rap.

It was an album that my Queens brother Phife Dawg recalls with mixed emotions. He was under a lot of pressure to deliver again and continuously fought to maintain his integrity as a sports jersey, fitted cap-rocking, street walking, lady – loving, cool cat from Queens who also got loose with the lips and the hands if necessary. His blend of street credibility fused with Q-Tip’s eclectic and afrocentric genius to form what many consider to be the most musically inclined rap duo in Hip-Hop history.

The multi-talented Ali Shaheed Muhammad provided assistance to Tip on creating the sound. Jarobi didn’t rap on the album, but he provided the positive energy and was the glue that kept the team together, the magic going.

It’s what made Tribe so incredible. They had every aspect covered, but what they wouldn’t do was promote the genocide of Black people, and for that, they are not only musical geniuses but African-American heroes, never compromising their integrity to make hits.

25 years have past since Midnight Marauders. The game has changed dramatically. 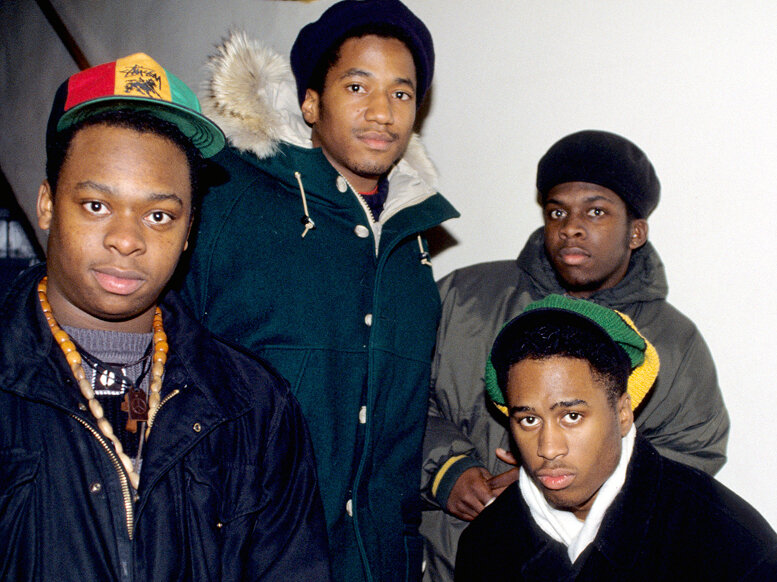 Since then,  ATCQ endured an award-winning documentary that exposed some deep conflicts betwen Phife and Q-Tip and the debilitating diabetes that Phife had struggled with most of his life. The emotion-evoking film by Michael Rapaport, Beats, Rhymes & Life: The Travels of A Tribe Called Quest, thrust ATCQ back into the spotlight — but it wasn’t all gravy.

I remember being with Phife and Michael Rappaport when they were doing press for the documentary that the rest of the group really didn’t want to be a part of back in 2011. It was rocky at times, but the love was still there.

The death of Phife Dawg occurred while in the midst of a reconciliation with Q-Tip, which led to an emotional reunion album.

We Got It from Here… Thank You 4 Your Service, dropped in 2016 to critical acclaim and went Gold. It was the group’s first album since The Love Movement in 1998.  It was right on time as hip-hop needed a reputable voice who was naturally inclined to speak to black issues and rebuke the divisive rhetoric of our new President and the damaging, racist social injustices that continue to diminish our country.

The 2016 project also marked the return of Jarobi to the musical mix and was also a celebration of the life of Malik Taylor “AKA” Phife Dawg, who despite having two kidneys that eventually gave out on him, was the never-ending heartbeat of the group and the main inspiration for a reunion album that further solidified ATCQ’s place in hip-hop heaven.

The re-relase of Midnight Marauders is the final chapter in the group coming full circle over a quarter of a century. It finally certifies the underappreciated album as a timeless masterpiece.