Summertime in the city was about the blacktop when we were coming up: rising early, having a quick breakfast and running out to the court before it got too crowded. You had to get there before everybody else and hope to win and hold the court, otherwise it was hours of “who got next?” and “you need one?”

The city courts weren’t just about basketball though. It was a place where everyone could go to both play and watch, where friendships evolved, egos were massaged and destroyed, reputations were earned, nicknames were developed, and occasionally where violence would erupt.

But in New York, the blacktop was the place where legends were born.

Before the days of And1 and YouTube, where talents such as “The Professor”, “Hot Sauce”, “Half Man, Half Amazing” and of course “Skip To My Lou” dominated the airwaves and internet browsers, New York was THE place for streetball.

Boys became men on the rough asphalt of the city streets, and men became legends throughout the boroughs and the world. “The Big Fella” (Lew Alcindor), “Tiny/The Skate” (Tiny Archibald), “The Destroyer” (Joe Hammond), “The Hawk” (Connie Hawkins), “Booger” (Ed Smith), “The Claw/Dr.J” (Julius Erving) and “Pee Wee” (Richard Kirkland) are just a few of the legends born from those summer days and nights spent on the courts in Brooklyn, the Bronx, Queens and Harlem.

There was another mystical name that earned a vaunted place among these blacktop greats, a person that I had the personal honor of both watching and meeting.

His name was Earl “The Goat” Manigault. 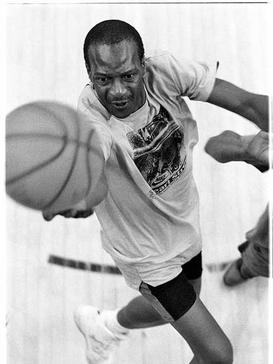 Born in South Carolina on September 7th, 1944 but raised in New York City, Manigault had the life and opportunities that all aspiring ballers craved. Talent, opportunity, support, fame and a name that preceded him; he had it all in a 6-foot-1 package, with the hops to match. Unfortunately, like many stories of fallen “hood” heroes, Manigault succumbed to the pressures which plagued the inner city and never lived up to the preordained expectations his talents created for him.

But to simply dismiss his life as a stereotypical manifestation of inner city life would be short-sighted and an injustice to what he was and what he became. This is what Eriq La Salle and Don Cheadle fought to prevent with the 1996 film, “Rebound: The Legend of Earl “The Goat” Manigault.”

The HBO movie aired on November 23rd, 1996, and twenty years later it, and The Goat, still shine as examples of how what could have been eventually became something else that was actually more important.

Most recognize La Salle for his character Darryl Jenks in Eddie Murphy’s “Coming to America”, but many don’t recognize, or appreciate, his lengthy, successful Hollywood resume. In 1996, after decades of acting, La Salle made his directorial debut with “Rebound” (he also played Diego in the movie) and gave a slowly rising star, Don Cheadle, his first leading role in a movie, portraying Manigault. For basketball fans, and those from NY in particular, this was a role with great importance, as The Goat was a living legend who was still having his impact felt uptown.

The plot of the movie could be boiled down to Black kid has all of the basketball talent in the world to make it out of the hood, wastes the opportunity, turns to drugs, gets kicked out of school, gets arrested, squanders life, then finally turns his life around and gives back to others. Simplicity can sometimes act as a detriment or a masquerade, and in the story of Manigault, this holds true as his life was more complex, revealing and significant than a diluted movie summary.

To understand his life, you must understand the environment he was a product of. Life in Harlem was rough. The Renaissance ending decades earlier, Harlem was starting to fall victim to crime, poverty, urban decay and drugs. Heroin and cocaine were taking hold of the community and many of affluence were fleeing the area, leaving voids which wouldn’t be filled until decades later.

But one man in the community wielded his power to help the youth and neighborhood, his name was Holcombe Rucker.

Rucker started his basketball tournament in 1947, stressing the importance of combining academics and athletics. He would tutor players and make them earn the right to play through classroom report card success. His caring of the neighborhood lead to the court on 155th and Frederick Douglas Boulevard, originally known as the PS 156 Playground, being renamed Holcombe Rucker Park in 1974, which is known as the legendary Rucker Park, home to stars of the blacktop and the hardwood.

But, more importantly, Rucker was able to obtain college scholarships for over 700 kids throughout his life of service, and one of those kids was Earl Manigault. Rucker was a coach, disciplinarian, mentor, teacher and father to hundreds of kids and tournament participants, and his influence and importance shone in the film through the acting of Forest Whitaker. Under the guidance of Rucker, Manigault honed his talents both on and off the court, averaging 24 points and 11 rebounds as the star at Benjamin Franklin High School in the late ’50s.

After getting into trouble and being kicked out of school, missing the chance to showcase his talents in the PSAL Championship against another great city talent known as Lew Alcindor, Manigault eventually enrolled at a Historically Black College, Johnson C. Smith. Although he had a strained relationship with the coach, who had no patience or appreciation for his “streetball” talents, Manigault was isolated from the dangers of the street which had swallowed so many already.

But he eventually fell victim to the streets, which the film depicted after he learned of the death of Rucker, and that set the stage for the next few years of the drug-plagued life of The Goat.

“Rebound” featured a top-notch roster of black talent including Cheadle, Whitaker, James Earl Jones, Michael Beach, Loretta Devine, Monica Calhoun and Tamara Tunie. It was also filmed in New York, giving it the rough feel of the city and the realism of Harlem in the ’60s and ’70s, which is far from the gentrified version we see now. Cheadle is one of the top actors in Hollywood today, but I have always felt that his portrayal of Manigault was the best performance of his highly successful career. Playing a man with such cultural significance and who experienced so much turmoil is no easy task. Cheadle captured not only the essence of The Goat, but also the problems many Black men faced in the inner city during that time (and some still do today).

You saw the star The Goat was and the struggles he had with the challenges he faced. You saw the fallen star he became, the effect of the loss and lack of a strong, Black male figure had on him, his struggle to rid himself of the demons suffocating him and the attempts to reconcile and overcome.

La Salle brought the struggles of Black Harlem and the excitement of the Rucker Pro Tournament to life. The hard- working families, drug infested playgrounds and the everyday fight faced by those in the community. The single mother struggling to support her family, crumbling inner city infrastructure, “babies having babies” and the absent Black Father syndrome.

Manigault’s life in Harlem was colored by both positive and negative swaths of life’s paintbrush and La Salle recognized the importance of it all, which is why he recruited the best in Black Star Power. James Earl Jones and Whitaker were easily recognized, but some might not have recognized NBA players Joe Smith and Kevin Garnett in their brief appearances as Connie Hawkins and Wilt Chamberlain, and some might not have known that Manigault was the first high school athlete to play in the Rucker Pro Division.

Starting in 1959 Harlem, “Rebound” took us through Manigault’s times as a skinny, ankle-weight wearing playground kid to becoming a high school phenom. From his drug addiction and rehabilitation, all the way to his 1st Annual Goat Basketball Tournament at 99th and Amsterdam avenue in Manhattan.

Although it’s now known as “Happy Warrior Playground,” those of us who grew up there will always call it “The Goat”. I grew up watching the games there from my Grandmother’s window across the street at Westgate. We played football on the wide sidewalks in front of PS 163, which housed those very courts. My Uncle was good friends with Manigault, playing ball with him and refereeing many of his tournament games. Ironically, their lives were very similar in that their talents were overshadowed by their mistakes in life, and when they finally turned their lives around, their futures were cut short before they had a chance to build upon their new paths. “Rebound” was also a lesson in Black history as we learned about some of the greatest names in New York City basketball history and how they came together to play in the most competitive,and famous streetball tournament in history. We were familiar with many of the names in the film that Manigault played with, like Alcindor and Chamberlain, but there were others briefly featured, such as “The Pearl” and Dean Memminger, who held great historical significance as well.

This was a time and place for not only these legends, but it also was a setting for books such as Pete Axthelm’s “The City Game” and Rick Telander’s “Heaven Is A Playground,” the former which was featured in the film when Manigault was in jail and the latter which introduced us to playground legends Albert King and Fly Williams.

Before Manigault passed away on May 15th, 1998, he made peace with his past and focused upon what he could do with his name and life experience. He established the “Walk Away From Drugs” tournament in Harlem to prevent kids from making the mistakes he had made, eventually taking the tournament to 99th street and changing it to “The Goat Tournament”, which was dedicated to the same mission.

Manigault once told the New York Times in the article on him, A Fallen King Revisits His Realm, “For every Michael Jordan, theres an Earl Manigault. We all cant make it. Somebody has to fall. I was the one.

But through his life, many learned how not to fall, and that’s one of the many reasons why we should celebrate what “Rebound,” La Salle and Cheadle gave us, and what Earl “The Goat” Manigault showed us.