It’s been over twenty years since AZ stole the show with his verses on the last cut recorded on Nas’s ultimately classic debut, Illmatic.

Visualizing the realism of life and actuality/ Fuck who’s “the baddest”; a person’s status depends on salary/ And my mentality is money-orientated/ I’m destined to live the dream for all my peeps who never made it/ Cause yeah, we were beginners in the hood as 5 Percenters/ But somethin musta got in us cause all of us turned to sinners/ Now some restin in peace and some are sitting in San Quentin/ Others such as myself are trying to carry on tradition/ Keeping the effervescent street ghetto essence inside us / Cause it provides us with the proper insight to guide us/ Even though, we know somehow we all gotta go/ But as long as we leaving thieving/ We’ll be leaving with some kind of dough/ So, until that day we expire and turn to vapors/ Me and my capersll be somewhere stackin plenty papers/ Keepin it real, packin steel, getting high/ Cause lifes a bitch and then you die —- AZs opening lyrics to Lifes a Bitch

The combination of Nas’ lyrical dexterity, his jazzman father Olu Dara on the cornet and AZ’s cinematic storytelling made the tune a cult classic. After the single hit, everyone was asking, “YO!!! Who is AZ? And when is his album coming out???”

A year later, Doe or Die hit the streets. It featured some of the same talent, like Pete Rock and L.E.S., that made Illmatic wildly successful. The album was a mix of danceable tracks, gritty New York street rhymes laced with Five Percenter ideology, and hardcore mafia-style lessons to live by.

AZ would go on to acting, guesting on albums, releasing the collaborative album, The Firm, featuring Foxy Brown, Cormega, and Nas, and seven more albums before taking a hiatus from the industry.

But AZ’s highly anticipated debut, Doe or Die, would go down in history as one of the classic hip-hop albums of 1995, alongside others like Raekwon’s Only Built 4 Cuban Lynx, Mobb Deep’s The Infamous and Tupac’s Me Against the World.

The Shadow League caught up with AZ and producer De’Juan Galloway to chop it up about the BET documentary made about the album. 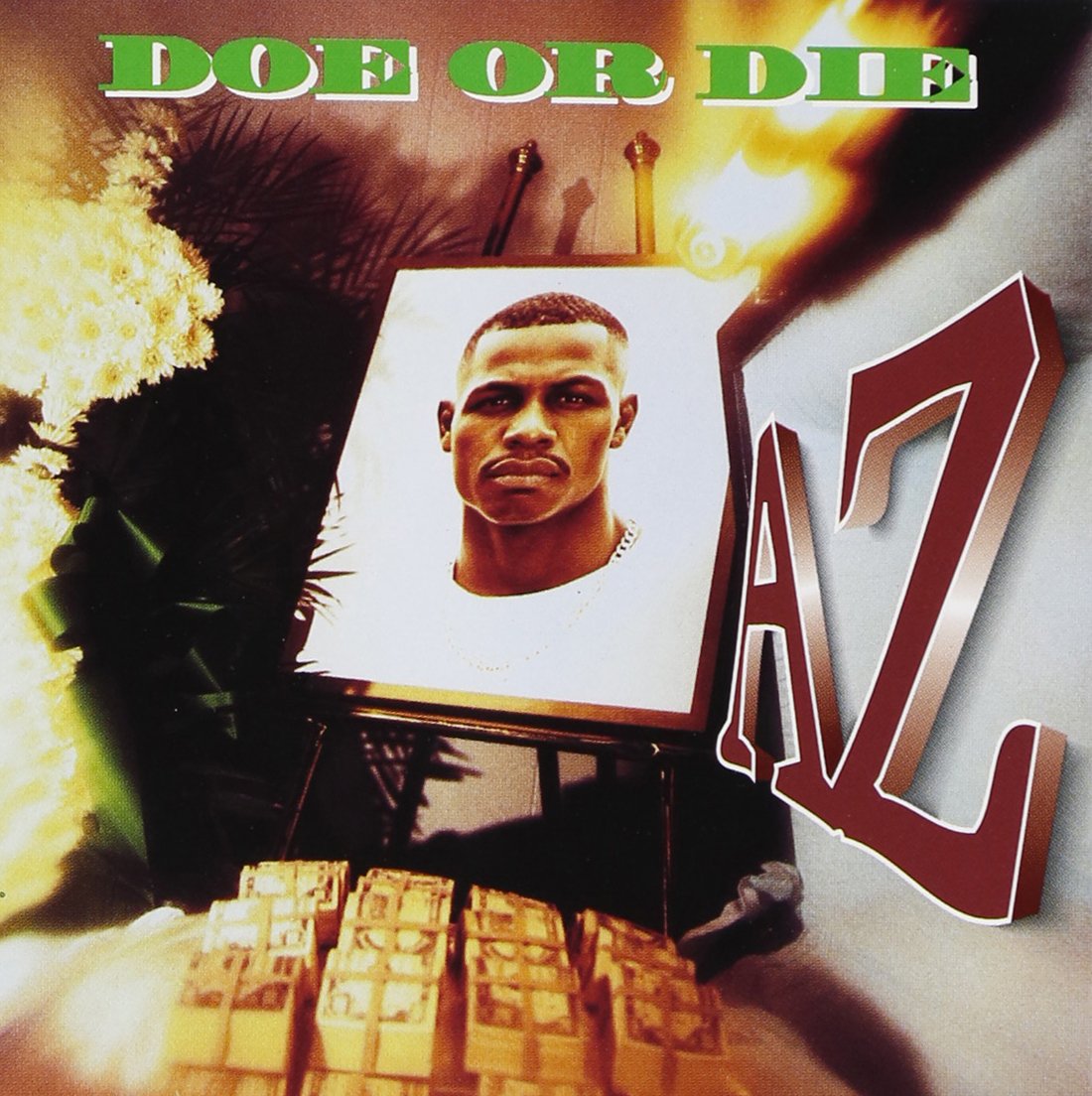 The Shadow League: AZ is at the top of the list of underrated lyricists. I know the 20-year anniversary of Doe or Die was last October. What made you make this documentary?

DeJuan Galloway: I worked for BET for several years on their award shows and a mentor of mine knew that I was an AZ fan, and he came to me about producing the documentary. I had heard rumblings about it. I just put myself out there and was like, Y’all need a producer on it, hit me up! And that day came. I was really excited at the opportunity to work with and to tell the story about someone who is super-underrated.

TSL: Your verse on Nas “Life’s a Bitch” was totally unexpected, right?

AZ: It wasnt something that was premeditated. It was something that happened organically, which was great. I guess it was just me being around Nas through the duration of him making Illmatic. I guess the time came when he was like, I’m at the tail end. It was the last song on the album. He heard what I was saying and he was like, Lay that down, lay that down!

TSL: How did you two meet?

AZ: Me and Nas met through a mutual friend. I am from Brooklyn and he’s from Queens. Back then it was always like, My man is better than your man., It was like, Well, who’s your man? Lets get him on. We gravitated towards each other because we were speaking on the same topic and we just clicked.

TSL: How did you get all of the talent that was in the doc, from Raekwon and L.E.S., to Rakim and Foxy Brown?

AZ: Shout out to all the people for showing that love. These were all the people that were around at the time. Raekwon was on the Doe or Die remix. L.E.S. did Sugarhill. When I met Foxy, we were thinking about doing The Firm two or three years before we even did it. All of the people in the documentary participated in the development of my career to some extent.

TSL: Before you did “Lifes a Bitch” you werent thinking about rapping as a career?

AZ: Not really. It wasnt my end-all-be-all. I was in the streets and tomorrow wasnt promised. It was just a hobby that I had.

TSL: What changed your mind about it?

AZ: [laughs] I got like a half a million.

TSL: Thatll do it.

AZ: Keeping it real, right here. I got focused.

TSL: Sugar Hill is one of my favorite singles from that album. What made you use the sample “Sugar Free” and did you get any flak from hardcore heads about the song?

AZ: Biggie Smalls set it off with “Juicy”, so he already opened the doors. I wasnt too happy about that record to be honest. It’s a dance record. I didnt like it at all. I’m a hardcore b-boy, but they winded up convincing me. And it made its way to the top.

TSL: You talked a little bit about the park jams in Dead Man’s Park in East New York in the documentary. How did park jams all around Brooklyn influence you?

TSL: What did that mean for you being able to do the album in Electric Lady studios?

AZ: It was a blessing to be in Jimi Hendrix’s studio. Its a great studio and environment.

TSL: What expectations were put on you for this album after everyone heard you on Illmatic?

AZ: I knew there were high expectations, but I was like, What do I got to lose? I got the money. If I fail, I’ll go back to what I was originally doing. That was my mindset. Of course I was like, Wow with this much money, I gotta get focused, but I tried not to worry about it.

TSL: How did you get Rakim as the narrator? He’s a pretty hardcore narrator.

De’Juan Galloway: Rakim came in the fold. AZ and I had met and he gave me his book, “Jewels, Gems and Treasures.” I read it over that weekend. AZ is really about paying homage to the forefathers of hip hop. He shouts out Rakim and Kane in that book and you know Rakim has that distinctive voice in the same way that AZ has that distinctive voice. I thought he would be great. I just kept it in the back of my mind and I ended up meeting some of his management team just naturally and I thought that was an omen of sorts. Hes the God MC, so we were very fortunate.

TSL: In the documentary, you didn’t talk about The Firm. There was a lot of criticism around that album. Why do you think that was?

AZ: It was so many cooks in the kitchen. The East and West were at war at the time, so it was already Divide and Conquer. Dre had just left Death Row Records. Trackmasters was hot on the East Coast, but you know once you hot, you’re hated at the same time. It was just that combination that caused the criticism. But it was good for us to all get together. Just the thought of getting us all in one room, all the producers and artists was a great thing.

TSL: This was right before the deaths of Tupac and Biggie. Were you getting beef about working with Dre?

AZ: Yeah, cause you know, the East Coast and West Coast war. But at the end of the day, the album came out pretty good.

TSL: At the beginning of your career, you were being compared to Kool G. Rap. Did you agree with that?

TSL: I hear there will be Doe or Die II album coming out soon. It has been a long time coming.

AZ: When you’re doing things independently, you just have to be more strategic because you dont have all the resources with the big machine behind you. I just wanted to set my ducks up right.

TSL: How have you been keeping your chops up?

AZ: I listen to the classics and keep my mind free. I try to make my poetry come to life the best way I can. Rakim, Kool G. Rap, Slick Rick, KRS-One and just the streets alone and the struggle have all influenced me. Telling stories that people can visualizethats my goal.