In the book SHOES (Workman Publishing), Linda O’Keeffe writes, “Shoes not only reflect social history, they are a personal record of our lives – touchstones that evoke a time, a place, an emotion. As mementos of occasions on which they are worn, shoes preserve the past, triggering memories as vivid as those in a photo album – the poignancy of a child’s tiny first shoe immortalized in bronze, the sweet sentiment of wedding slippers tucked away in their original box. The indefinable allure of a new shoe unlocks rich private fantasies.”

In a 2007 commercial from Wieden + Kennedy, a shoe is given the life of Christ.

“The Second Coming” is the line given. As in a resurrection; as in Jesus; as in something from God.

The “Second Coming” of what, though? By the end of the commercial … you knew.

“The Air Force 1 has become an icon in the world of shoes, fashion and pop culture,” blogger Albert Costill wrote on his July 11, 2013 post on sojones.com about the History of the Nike Air Force 1. “It was groundbreaking. It was fresh. It was a must-cop item. It’s become a favorite amongst sneaker heads. And, it changed the shoe industry forever by transcending from the court to the streets.”

At an event celebrating its 25th anniversary six years ago, 150 white wooden boxes were placed alone in 150 empty hotel rooms in New York. Inside those boxes, the original version of the second coming. Remixed. On each box, eight words: “Innovation is not a destination, it’s a journey.”

And it is the journey of what was inside those boxes that bespeaks the untold story of a cultural icon that transcends the sport it was designed to be a part of. A simple shoe made for basketball and what the game represented. A reflection of social history. Private fantasies.

A shoe that was once left for dead, but rose from it. And continues to rise.

Thirty-one years ago, the original Air Force 1 was lucked-up on, not known. The story of Bruce Kilgore designing the perfect shoe, the perfect piece of basketball art, didn’t come from a drafting table in Beaverton, Oregon.

There were a lot of fresh Air Force's. These were the freshest»

No, the “first coming,” the true story of what possibly is the most important element of the marriage of basketball and the urban culture, is one of illicit detail and illegal activity. It’s a story of the drug game and retail genius. A hustle that can’t be knocked on a road traveled by the multitudes. A movement in the era of the Nicky Barnes, Rayful Edmonds and Frank Lucas movements. When a tri-city collective of less than a thousand sparked an era. When a particular sneaker made more guest appearances on rap album and cassette covers than gold fronts and dookie ropes. When it was the single tangible substance that bridged the gap between a generation of youth who were using either hip-hop or basketball to get out of America’s asphalt jungles.

The original story is of one road, one corridor, and how one shoe, once a month, changed the lives of many, birthed a culture and is directly responsible for giving life to one of the most influential companies in the world.

“The shoe died about a year after its original release,” Paul Blinken, shoe buyer of Cinderella Shoes in Baltimore, said over the phone just days after the Air Force 1 was celebrated in New York and Beijing for being 25 years young and still a major force in the game. “But Harold Rudo and myself talked to Nike, they were really concerned about the inner city. They wanted to know ‘Why don’t we have any business there anymore?’ And we told them, ‘Because your product sucks and you need to bring back the original Air Force 1s.’”

Rudo, who was the head buyer for the famous Charley Rudo shoe retail “emporium” (owned by his father) in Baltimore, weaves the same tale. “They wanted us to order 1200 pairs of a color and we gave them two: white/royal blue, high and white/chocolate brown, high (meaning high tops). They delivered them in six months.” 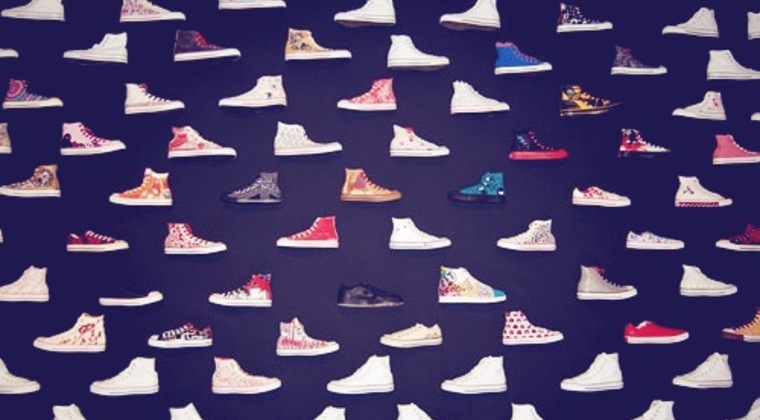 Ten Jordans Every Sneaker Beast Should Own

Blinken: “Rob Strausser, who I think was president at the time (and one of the persons who coined the phrase “Air Jordan” for Nike), said to us, ‘What are you #[email protected]%-ing crazy! You guys are nuts! Nobody sells chocolate brown!’ But he believed in us. And from there we began to develop a program. What we wanted, what would sell, what colors. Harold would take 950 pairs, I took 250 pairs. And we blew them out. We blew ’em out! And we went back to Nike and told them, this is what we want: one color a month.”

Rudo: “We called them special make-ups because they were only made for a couple of dealers. And we tried to mix it up – give them some highs, and some lows. And we weren’t just doing this with Nike, we were doing special make-ups for adidas, Footjoy and Fila.”

But Nike wanted more; they knew the urban market was hot, the fire they needed. So they upped the ante to 1800 pairs. A number Rudo and Blinken couldn’t handle. In comes Nike rep “Coach” Jeff Tapkas, who suggested that one more Baltimore store be included: the Downtown Locker Room.

And it was here where the un-televised revolution began.

From Baltimore to NY to Philly and back. Up and down I-95, the interstate connection that connected the three. Cats would roll deep, posse deep, in everything from Caddy DeVilles to Chevy Astros up and down the 190 mile thoroughfare, bagging boxes of 1s for them and their crew, only to come back one month later when the next colorway would be released.

Rudo: “We started what we called the Color of the Month Club. Everywhere I went kids would stop me, ‘What’s the next color you got coming?’ It was crazy.”

Blinken: “Sometimes they’d come in and try to buy 20 pairs at a time and I wouldn’t let them.”

Rudo: “(With the colors) we hooked it up. Matter of fact, we invented the hook up. In Baltimore, at the time, everyone was into Russell sweats. So if we did a blood-red Nike Air, we’d bring in a blood-red Russell to hook it up with; if we ordered a white/gold Air Force 1, we had a gold-colored Russell to match.

Rudo, Blinken and Tony Trantas (Downtown Locker Room) became known as the Three Amigos. Quietly, they became the most vital men in the brand Nike was trying to build. Running was the company’s fame claim and calling card, but Phil Knight, the company’s co-founder and CEO, knew that the indentation he wanted his company to make had to come through basketball. And with the NBA, at the time, saturated with lethal weapons, Nike realized that the “culture” of basketball had to save them where the “game” of basketball couldn’t.

As Tanika White wrote in her January 2007 story in the Baltimore Sun about the city’s affair with the AF1:

“After a while, maybe after two years or so, Nike began to include more vendors and open up the game to more guys,” Rudo says. Which eventually led to the emergence of national chains like Footlocker finding their places in the market then eventually monopolizing it. Which eventually meant the end of the I-95 runs and the demise of Baltimore’s influence on what eventually would become an urban legend in American society.

But with the Three Amigos moving anywhere from 2000 to upwards of 4000 units a month of strictly Air Force 1s, they know who orchestrated the “real” Force revolution. They know why the same shoe they resurrected and resuscitated in 1984 is still more important than any other shoe Nike has manufactured 25 to 30 years later. They knew it then; they know it now.

As Blinken honestly believes, “I’m telling you, if it weren’t for me and Harold, Nike would have been just another shoe company.”