Cinematographer Matthew Libatique captured all of the gritty, dangerous and excessive lifestyles of the protagonists and romanticized the environment just enough to draw viewers in. However, there is a cautionary spice hiding just beneath the surface of every riveting scene.

Sitting in a darkened, crowded movie theater in Baltimore which was populated by people, young and old, of many ethnic backgrounds, I couldn’t keep my head from bobbing. It wasn’t simply the pulsating beats and countless hits that emanated from N.W.A. and the crew members later success as solo artists.

When Dr. Dre, who’s trying to make ends meet as a club DJ, artfully backspins and mixes Steve Arrington’s Weak at the Knees with his phenomenal turntable skills, and when he’s daydreaming with his eyes closed, as his headphones explode with the hypnotizing vibraphone, percussion, electric piano, synthesizer and soothingly magnetic vocals of Roy Ayers musical masterpiece “Everybody Loves the Sunshine,” I found myself smiling through a tinge of sadness. 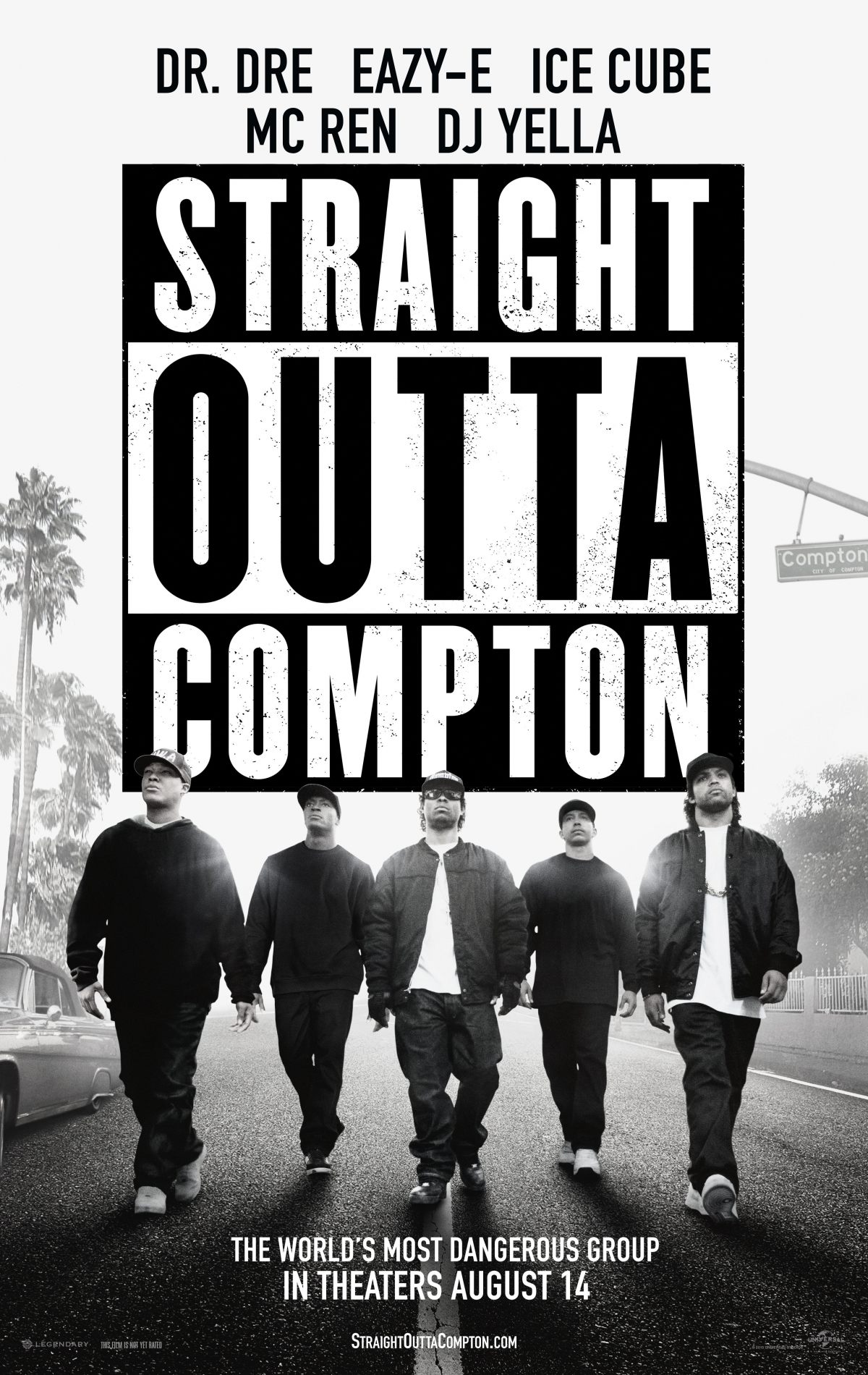 Hearkening back to childhood weekends spent with my aunt Pat and uncle Gary in Staten Islands Park Hill housing projects, I pictured my uncle G, who recently passed away, flipping through his extensive vinyl collection in the late 70s and early 80s, delicately handling those very albums before placing them on his turntable while simultaneously dancing, laughing and debating politics.

Glancing at the albums that were scattered on Dre’s bedroom floor, I realized that I grew up fascinated and influenced by the same artists, my thoughts drifting above and beyond the stifling poverty and violence outside my front door, dreams propelled on the wings of incredible talents like Lou Rawls, Teddy Pendergrass, Barry White, Gamble and Huff, James Brown, Curtis Mayfield, Stevie Wonder, Marvin Gaye and many others.

I totally lost myself in the film, engrossingly submerged in the fantastically told and superbly acted story. I laughed out loud, danced in my seat, and was angered and enraged. At a certain juncture toward the end, I struggled to fight back tears.

My colleague Ricardo Hazell penned an outstanding review of the movie that is an absolute must-read. If you haven’t checked it out yet, you should.

As I drove home last night, laughing at the motivational speech that the Crenshaw Mafia gangbanger gives aboard Ice Cubes school bus in one of the film’s most hilariously subtle and daunting moments, I couldn’t help but be floored by N.W.A.s overall impact.

Contrary to popular opinion, the polarizing group did not invent the Gangster Rap genre. Philly’s Schoolly D and L.A.s Ice-T were among the sounds’  early pioneers with their cult-classic offerings of P.S.K. and 6 N the Mornin.

But N.W.A. took Gangster Rap off the fringe in the most incredible way, delivering it to mainstream, suburban white America with a bombastic ferocity that had never been seen before. And they did it without a single minute of radio airplay.

If Public Enemy made a segment of society nervous with their initial offerings of Yo! Bum Rush the Show, It Takes a Nation of Millions to Hold Us Back and Fear of a Black Planet, N.W.A. absolutely and completely terrified that demographic when they dropped their debut album Straight Outta Compton in 1988.

When Dre lights the fuse with the words, “You are now about to witness the strength of street knowledge,” the fuse that will change the face of music is irreversibly lit. It is the seminal moment that will resonate forever on the musical landscape, a seismic event that, in one monotone gesture, will turn Hip Hop into the new Rock and Roll.

Ice Cubes opening verse is unlike anything that’s ever been heard before. When he spits (in the clean version), “Me and you can go toe-to-toe no maybe, I’m knocking suckas out the box daily, Yo weekly, monthly and yearly, until the whole damn world sees clearly, that I’m down with the capital C.P.T., Boy you can’t step to me!” he’s sending a clear message that the game done changed.

When Eazy E begins his verse by saying that “he’ll smother your mother,” and proceed to make your sister think that he loves her, maaaaaan listen!!! In the span of those few minutes, the West Coast jacked the Hip Hop crown from their contemporaries back east with an intense ferociousness reminiscent of Marvelous Marvin Hagler and Tommy Hearns in Round 1.

Those with limited understanding bashed F*** tha Police as glorifying violence against law enforcement, but they couldnt read into the groups social commentary about racial profiling and cops wantonly and recklessly abusing African-American men, sometimes murdering them after minimal to no provocation, and not suffering any consequences behind their lawless brutality.

After the Rodney King verdict and the resulting riots that rocked Los Angeles, and even now, close to 30 years later in the wake of the recent police killings of Michael Brown, Eric Garner, Tamir Rice and others, folks are just beginning to understand the depth of the abuse, hurt, fury and antagonism, and their underlying roots.

F*** tha Police is very much on par with Billie Holidays chilling and distressing song that protested the lynching of African-Americans, Strange Fruit, a lyrical manifestation of a distressed resistance to racism and institutional violence directed at the innocent and vulnerable black body.

This wasn’t Gangster Rap, it was, as they called it, Reality Rap.

N.W.A. blessed us and influenced a future generation in ways that can’t even be quantified. From the original group members to their various proteges that include, among others, Bone-Thugs-N-Harmony, Eminem, The D.O.C., 50 Cent and Snoop, to Dre’s masterful production and the creation of a synthesizer based sound known as G-Funk, the groups legacy is astounding.

They told their stories, reflecting the reality of the California ghettoes, with a brutality that was based in an unrelenting candor and sincerity. They spoke about gangs, drugs and guns, and surviving in an area that most people thought was populated simply by palm trees, great weather and movie stars.

Where Public Enemy was rebellious, N.W.A. was straight up rambunctious. They will forever be culturally resonant. They weren’t simply bragging about dope and AK-47s, their words exhibited intelligence and social awareness that happened to be shrouded in violence, the carnage of sadistic hostility that is ever-present in America’s forgotten pockets of urban despair.

Their commentary was born out of necessity, propelled into suburban living rooms by the funky soundscape and sonic booms of Dres delicately complex musical architecture and the crew members muscular, incensed, poignant and subtly funny lyrics.

N.W.A. was one of the most important groups, not only in Hip Hop but in all of music. It’s impossible to overstate their magnitude.

Dr. Dre, Ice Cube, Yella, MC Ren and Eazy E are an essential landmark on the musical highway, a group of teenagers from Compton who chronicled a time of crisis in our inner cities with a vibrant and cacophonous roar of realism in a way that no journalist ever could have.

According to Dame, It’s a Shame David Vanterpool Isn’t a Head Coach!