When Wilt Chamberlain dropped a buck on March 2, 1962 in the Philadelphia Warrior’s 169-147 win over the New York Knicks in Hershey, Pennsylvania, there wasnt even any video footage to capture the moment. I have heard clips of some radio audio, but I dont think there is audio of the complete game.

All that remains to commemorate that iconic achievement 55 years ago of 100 points in one game by one of the NBAs true giants superheroes is a picture of Chamberlain holding a white piece of paper with the number 100 written on it. 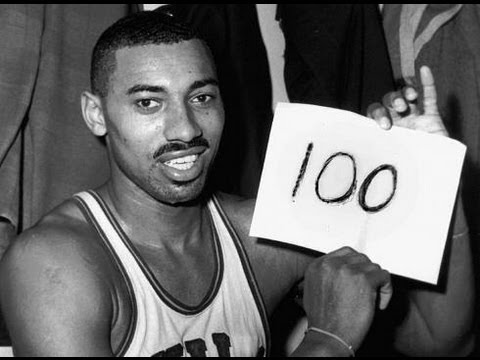 And a box score I guess somebody found in their great grandfathers garage.

The rest, we have to imagine for ourselves, learn about through first person accounts and read about in old newspaper clippings for details. Wilt had 41 by halftime as he abused New Yorks backup centers, and when he hit the mythical century mark, he had obliterated his previous NBA scoring record of 78 points set less than three months earlier.

Fans bum-rushed the court and Wilt ran into the locker room, where PR man Harvey Pollack scrawled “100” on a piece of paper and had Chamberlain hold it up for photographers.

Chamberlains mythical statistical feats are like folktales to people in this instant information, social media age. If you werent one of the 4,124 people at the game, then you never got to see it. Theres something exclusively and uniquely wonderful about being one of a small group of people to be privy to something colossally historic that the rest of the world will never get an opportunity to see.

That sums up Wilt Chamberlain’s career in a nutshell (RIP)

Are These NBA Draft Picks Going To Be Sleepers, Steals Or Busts?