In last year’s Finals, folks who were not rooting for the Cavs seemed to be convinced that Matthew Dellavadova was dirtier than Brooklyn’s 77th Precint in the ’80s.

In this year’s playoffs, it’s become pretty clear that in addition to being one of the brightest young talents in the game, that the Warriors’ Draymond Green has displaced him atop that list due to his demonstrated fixation with pummeling other people’s junk. 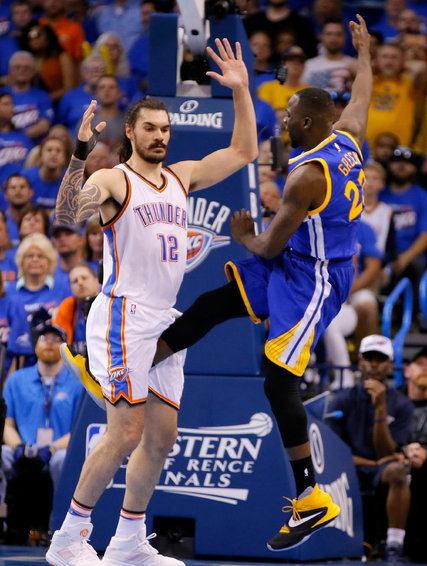 His Golden State teammate Mo Speights, who says that he has lost respect for LeBron James and that Green was suspended for tonight’s Game 5 of the Finals “over nothing”, is getting lit up on the Tweeters right about now.

In addition to folks posting photos of Green’s egregious testicular assaults to Speights, they’re also letting him have it with some new-fashioned internet thuggery, like, “N**** got a nipple on his head and can’t make a layup but he’s talking s*** about LeBron.”

Another takes the diss even further, saying, “[Speights] ain’t nothin but a B****. He wouldn’t be talking all that s*** if he was on a bad team. Hiding behind all that talent.”

At the root of the James and Green beef, in addition to Draymond’s aforementioned “ball-handling”, is that B**** word, which was what reportedly sent James into a rage.

In case you missed it, Draymond is suspended for tonight’s game due to a flagrant foul that the NBA levied two days after Friday’s Game 4. When James stepped over Green, who was hunched over while trying to get back up after hitting the floor, the heart and soul of the Warriors responded with a shot to James genitals.

As all men know, all it takes is a slight grazing of the region to cause some mind-altering discomfort.

Draymond should have been suspended weeks ago due to the testicular homicide he attempted against OKC’s Steven Adams in the Western Conference Finals. His pattern of similar tactics is disturbing to say the least, so regardless of the conspiracy theorists claiming that the Illuminati suspended him so that the almighty dollar could reign supreme with the series extending toward a Game 6 in Cleveland, the NBA did what they should have done a while ago.

I have no issue with LeBron’s initial response, though I do have one with how he reacted seconds later when Green reportedly called him a B****. On the basketball courts that I grew up on in New York, it’s a taboo word, the ultimate insult to one’s manhood that requires a brutal response. That’s the code of the streets.

But LeBron is not playing on the streets. He’s trying to carry a team and a city to a championship. For one of the very few times in his career, he let his emotions take over.

And it was at the most inopportune time, because now everybody knows that Green and this Warriors team has gotten inside his head. Klay Tompson said at the post-game press conference that, “I guess LeBron’s feelings got hurt.”

His feelings and his pride, because it’s apparent right now that Cleveland is overmatched and ill-prepared to deal with the monsoon of excellence that Golden State is raining down on them.

And why is Ayesha Curry talking trash on the Tweeters as well? But I digress.

I’ve never been one to get into the Jordan comparisons with LeBron because they’re entirely different players with different personalities that were forged in distinctly separate eras. But I’ll go there right now.

There were many people who talked trash to MJ. John Starks, Reggie Miller and Gary Payton come to mind. They didn’t back down to anyone.

But ultimately, Jordan made them pay the price in the form of destroying them on the basketball court. Omar Little said it best on The Wire: “You come at The King, you best not miss.”

Well, hit or miss right now, The Warriors are coming at the king and laughing about it. Their wives are on the Tweeters talking smack about it, too!.

Jordan didn’t get emotional. He got busy.

Like Biggie once said when talking about beef, “…All of y’all will disappear by tomorrow, All your guns is borrowed, I don’t feel sorrow…”

So who are we gonna see tonight? Because make no mistake, the’re coming for the King. You know it, it’s the second year in a row that they’ve done it. And now things have boiled over and become personal.

Let’s see what you got, LeBron. Because so far, it’s the Warriors who are crooning, “There’ll be nothin but smooth sailin’, When I spit shots, now your crew’s bailin’!”

It’s abundantly clear that Golden State is exceptional. No real student of the game will blame you for coming up short.

But you will be blamed and judged harshly for not riding out the rest of this series like the Champ in Harlem Nights, telling Draymond and the rest of his crew, “D-D-Don’t, t-t-take thith, ath whippin’, p-p-perthonal.”

You won’t be blamed for going out swinging LeBron, but you will be judged for coming up weak as the anti-Mike, for letting the Warriors feel so comfortable in coming for the king as they arrogantly know ahead of the battle that they ain’t gonna miss, and they walk around laughing about it.