Light flyweight Nico Hernandez(Wichita, Kansas) clinched a bronze medal with his third unanimous decision victory of the 2016 Olympic Games on Wednesday night at Riocentro Pavilion 6. Hernandez’s win advances him on to a semifinal match-up and secures his berth on the podium.

Light welterweight Gary Antuanne Russell (Capitol Heights, Md.) made it an undefeated night for the American squad with a unanimous decision victory in his Olympic debut.

In a change from past Olympic Games, the light flyweight bracket will be completed in the first eight days of the Olympic Games and Hernandez has taken gotten on quite a roll while boxing every other day. He stepped in to the ring for the third time of the Olympic Games for his quarterfinal contest with Ecuador’s Carlos Eduardo Quipo Palaxti on Wednesday. Hernandez enjoyed the chance to clinch at least a bronze medal and he didn’t let the opportunity slip by.

As has been common at the Olympic Games, the first half of the opening round went by without a ton of action from either boxer. The pace quickened over the final 90 seconds of the round as both boxers landed hooks on their opponent and Palaxti pulled out the round on two judges’ scorecards.

Hernandez turned up the heat in the second round, landing shots early in the round to take control of the match. He connected with several clean shots in the round and took the second stanza on all three judges’ scorecards to tie the bout up with one round remaining.

Competing chants of Ecuador and U-S-A filled Riocentro Pavilion 6 as the bout moved in to the final and defining round. Hernandez set the tone in the final three minutes, landing strong punches while blocking Palaxti effectively and staking his claim an on Olympic medal. All three judges’ rewarded Hernandez efforts in the third round, giving him the bout by unanimous decision to advance the 20-year-old boxer to the semifinal round and ensure he will leave Rio with at least a bronze medal. 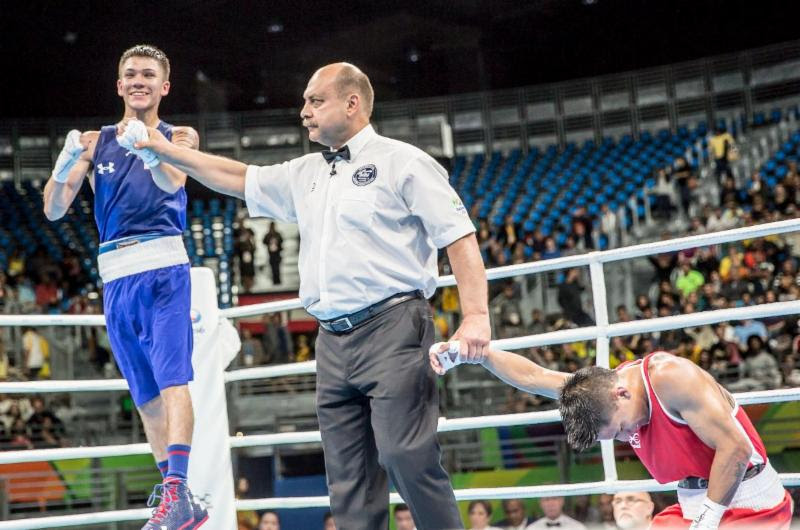 He will compete in his semifinal bout with Uzebkistan’s Hasanboy Dusmatovat 12:15 p.m. Brazil time (11:15 a.m. ET) on Friday for a spot in the finals.

“It was a little difficult but I know as I go along the fights are just gonna get harder. As long as I listen to my coaches and do what they say, I know they won’t lead me on the wrong path. They told me it was close, that the first round was close,” Hernandez said. “I hit him with a couple body shots and I feel like that slowed him down. I knew he was going to be coming forward. He’s a real strong fighter so I had to wear him down to the body and slow him down.”

Hernandez and his corner made key adjustments in the bout that helped him get the victory.

“I knew I took the second round. They told me that I needed that third round to win so I went out there and executed the plan. They told me to not rush in, use feints, let him come in, pick my uppercuts, stay on the outside because he’s the shorter fighter. That’s what I did and it worked,” Hernandez said. “He’s a shorter fighter and I was getting too close to fighting his fight instead of staying on the outside and picking my shots so once I started picking my shots I started landing more clean shots and it worked for me.”

While Hernandez is by no means done at the Olympic Games, he understands the importance of breaking the eight-year medal drought the U.S. Men’s Boxing Team has had.

“It feels good (to win a medal) knowing that we didn’t medal the last Olympics. It gives me and my team a lot of motivation. We’ve all been together since we were younger on the youth team and the junior team so at practice we will push each other and we’re real competitive at practice too. They definitely help me out a lot and that means a lot to me knowing that we are coming in here and getting the job done,” he said. “I know it’s really important for my coaches, USA Boxing, me and my family back at home so I’m just real glad because I worked a long time for this. We finally got to the big stage and now we are coming here to change USA Boxing and hopefully bring home more medals.”

Hernandez is pleased with what he’s accomplished in Rio de Janeiro but has his eye on a medal of a different color.

“I’m definitely excited about getting to this level and where I’m at but I’m not satisfied with a bronze medal. I came here to get a gold so that’s what I’m going to continue to work towards. I think I definitely set a good example (for his teammates), making them want to push and also medal. They also support me and are inspiration for me also.”

The 20-year-old light flyweight knows that he didn’t enter the Olympic Games as a favorite to win a medal but he didn’t feed in to his opponent’s resumes or tournament seeds. “I think the top guys are meant to be beaten. That’s what I’m here for to get my spot up there and beat them and come out with a victory,” Hernandez said. “So I thank God that I’m here and thank God for my victories. I’m not going to focus on the bronze medal right now. My focus was to come and get the gold medal so I won’t be satisfied until I get the gold medal.”

Russell entered the ring approximately 90 minutes after his teammates’ big win and he kept the U.S. team rolling in a bout with a familiar opponent in their light welterweight preliminary contest. He faced fellow Olympic Trials participant Richardson Hitchins, a Brooklyn native who is representing Haiti in the 2016 Olympics. Russell eliminated him at the Olympic Trials and he walked in to the Riocentro Pavilion 6 expecting to the do the same.

For the Russell family, Gary Antuanne’s first bout was a culmination of years of work for their pugilistic family. His older brother Gary Jr., was a 2008 Olympian but fell ill the night before the weigh-ins and was unable to compete. Little brother made sure to learn from his big brother’s experience.

With his father/trainer Gary Sr., and mom Lawan looking on proudly, Russell built an early lead in the bout. He took the first round on all three judges’ scorecards and continued his success in the second. Russell stalked Hitchins in the match and looked to land strong body shots. He took a two round lead in to the final round and he became more aggressive over the final three minutes on his way to a unanimous decision win.

After his hand was raised, Russell ran over to toward his parents and jumped over a partition to embrace and acknowledge them and celebrate his first win of the Olympic Games. Russell will compete in his second match on Sunday against Thailand’s Wuttichai Masuk.

“I’m a very confident in what I do. They way my performance showed I was expecting to be a lot better. Made it an ugly fight but a great fighter said it’s not how you win as long as you win,” Russell said. “I believe that he was training for me. He even went to camp for people to try to imitate my fighting style but the way I’ve been taught is that no matter what the other person brings to the plate, it’s my job to capitalize. It wasn’t too tough, no matter what he brought to the table, I knew that I had the answer for it.”

Russell and his three boxing brothers are all trained by their father and they have a special ability to pick his voice of out of the crowd and Wednesday was no exception.

“I don’t know what it is. I believe it’s tunnel vision. I can zone everyone out and hear my father. He said I had to let my hands go more, shoe shine, flurry off, work behind your jab, start touching the body, come back upstairs,” he said.

He couldn’t help but run over and see them following the bout.

“I hadn’t seen them in a long time. They’re my biggest supporters. I’ve been on the road. Home for two days, gone for two weeks, four weeks so they’ve been behind me since day one,” Russell said of his parents.

Boxing is the family business in the Russell household and the youngest boxer in the family has had the added benefit of watching the trials and tribulations his family has previously endured.

“It means a lot because through my family history, all of my brothers we’ve been mirroring each other. We all won the Golden Glove Nationals. My brother Gary Jr., he went to the 2008 Olympics and couldn’t compete and know here I am mirroring him in 2016 going to the Olympics but I believe I took it a notch ahead. Instead of us mirroring each other at the same level, I made the change in the whole aspect of development so I’m happy with that,” Russell added.

The U.S. Boxing Team is now off to a 6-1 start and will enjoy an off day on Thursday before Hernandez and lightweights Mikaela Mayer (Los Angeles, Calif.) and Carlos Balderas (Santa Maria, Calif.) all compete on Friday. Balderas will take the ring immediately following Hernandez’s bout at 12:30 in a quarterfinal match-up with Cuba’s Lazaro Alvarez. Should Balderas emerge victorious, he will join his roommate in clinching an Olympic medal. Mayer will box in the evening session at 5:30 p.m. in her tournament opener against the Federated States of Micronesia’s Jennifer Chieng.