Writer David Walker is quickly becoming known as a penman who draws upon his own inherent negritude to breath life into any graphic novel he brings his considerable talents to.

In Nighthawk #1, we find Walker taking on a character who is the alternate universe version of Nighthawk of Squadron Supreme – who himself is a Marvel caricature of the DC’s Batman. However, unlike Kyle Richmond, whose interests are often self-serving, and Bruce Wayne, who never kills in his constant fight for justice, Raymond Kane kills for justice.

But it’s his own brand of brutal justice.

In fact, as is illustrated in his fight against gun-running white supremacists in the first panels of Nighthawk #1, he has zero compunctions about killing. Others have compared him to the Punisher, but to me his motivations are more focused and realistic. 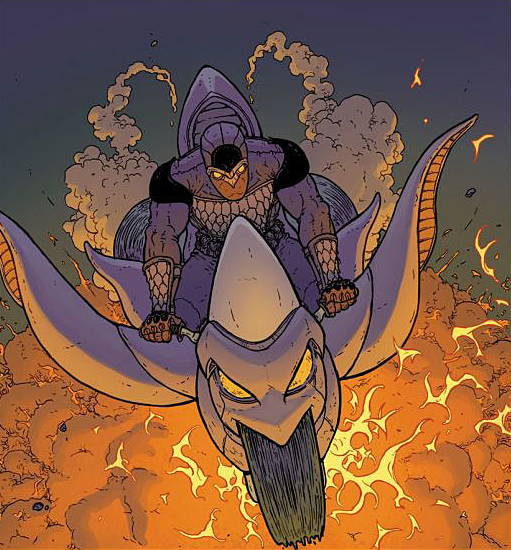 First appearing in Supreme Power: Squadron Supreme #1 and Supreme Power: Nighthawk #1 (2003), Kane is a wealthy prosecutor who trains and develops advanced weapons to fight crime. Originally from Earth-31916 – a parallel universe to Earth-616 – Nighthawk finds himself transported to contemporary Chicago where he actively investigates drug peddling, fights white supremacists and greedy developers, among other ills directed at the denizens of the inner city.

Though the means by which he is transported to Earth-616 aren’t spelled out, the destruction of his world and his arrival seem to have been caused by the universally catastrophic events of Secret Wars (2015). His villain remains unmasked in the first issue but it is made clear to the reader that he is a psychopath named Revelator, who brutally and ritualistically kills victims. We also find that this Nighthawk is haunted by the voice of his mother when he administers his own brand of street justice to the villains in question. It is clear that Raymond Kane’s smoldering anger has a great deal to do with the manner in which Black people in Chicago are left to suffer, based upon the decisions of wicked men.

Like the cowl-wearing, scowling prototype this character was modeled after, Nighthawk is actually a pained character who emotionally struggles with the life he has chosen.

He is assisted in logistics and inventions by Tilda Johnson, a robotics expert and reformed criminal. She designs Nighthawk’s signature robotic drones but is none too pleased when Kane sacrifices these expensive works of art, which is alluded to as being an unfortunate norm of their working relationship.

Thanks to Raymond Villalobos, the contemporary Chicago in which Nighthawk operates is dark, bloody, cruel and gritty. He illustrates Nighthawk as heavy in tone and painfully contemporary, while expertly complementing Walker’s storytelling. Also, colorist Tamra Bonvillain perfectly complements Villalobos with her interpretation of shadows and shade.