Anybody who knows anything can tell you that Brian Michael Bendis is one of the hottest writers in comic books these days. Because of that, as well as the success of Captain America: Civil War and the 2006 Marvel Comics offering that inspired it – for which Bendis wrote the New Avengers tie-in – Civil War II has been highly and anticipated. Unlike other limited series excursions, Civil War II starts off with a bang as the All New Avengers, the Ultimates, Avengers Unity Division, A-Force, and the Inhumans are battling to prevent an Apocalypse that is in imminent danger of being brought about by the massive, inter-dimensional Celestial Destructor.

It would have been bad enough if it were just a regular giant Celestial from outer space bent on judging the world, but the “destructor” part makes one believe this guy had already made up his mind.

In the first series it was the ideologies of Iron Man and Captain America that clashed over the Superhero Registration Act. This time around it’s Iron Man and Captain Marvel who are squaring off. So, the plot unfolds thus; after vanquishing the aforementioned foe thanks in large part to Dr. Strange, the heroes retreat back to Starks Tower where the Inhumans answer percolating questions about how they knew the Celestial Destructor was coming. 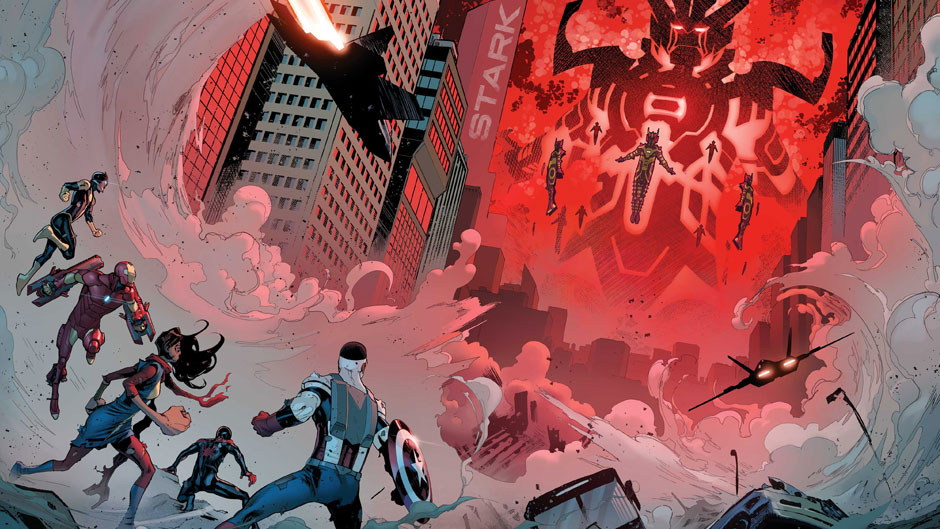 Medusa introduces them to a young man named Ulysses, a new inhuman who they located when he was on the verge of mental collapse from his new powers that allow him to see into the future. Captain Marvel is immediately intrigued and offers the stranger a job while Iron Man is very weary of the possibility of abusive behavior by heroes.

Fast forward to weeks later and we see that unthinkable happens while the Ultimates are on a mission to subdue Thanos thanks to a vision from Ulysses, who contacts Captain Marvel and crew to subdue Thanos – who has arrived on earth in search of the fabled cosmic cube. Rhodes aka War Machine is an Avenger but was at the Ultimates’ compound to see Captain Marvel aka Carol Danvers aka his Boo.

As was depicted in the Civil War prelude released last month, when the call comes he naturally volunteers. One bad thing leads to another bad thing and Rhodey ends up becoming a blood pulp under a coroner blanket, the remnants of his armor look like little more than charred scrap of tin foil on a table beside him.

Yes, it looks like a closed casket funeral is definitely in store for James Rhodes. Furious at the loss of his best friend, Starks yells for Danvers, who emerges wearing bloody medical scrubs. She-Hulk is hooked up to life support but is fading fast. Tony Starks flies off to presumably do something about Ulysses but the reader is left to use their imaginations as to what. Danvers, who just lost her boyfriend, is forced to watch as one of her best friends, the once-thought indestructible She-Hulk, dies of her injuries from their battle with Thanos – who is being held in a cell beneath the compound. But for how long? After all, they don’t call him the Mad Titan for nothing.

Artist David Marquez’s style is beautiful. The detail, the facial expressions, the splash pages full of action and movement, all were aesthetically pleasing. Bendis reportedly only agreed to do the sequal limited series after it was turned down Mike Millar and Steve McNiven, the creators of the original.

Civil War II #1 contains just enough intrigue, destruction and uncertainty to leave viewers craving for more. This book is worth being read as a standalone piece of literature and truly gets things started with a bang for the entire series and tie-ins.

TSL Comic Book Convo gives it five and one-half out of six stars.