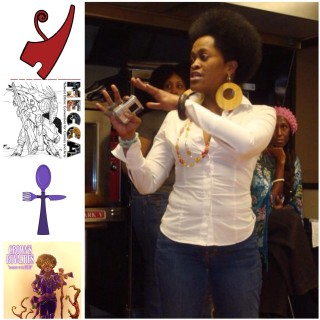 The importance of women in the comic book industry, whether as crafters or characters, should be as obvious as the fingers on a hand or wooliness of a beard. Comic books wouldn’t be the same without the artistic and creative talents of legions of forgotten and overlooked women. Straight to the point, that’s why women like Maia Crown Williams are so important. While some individuals are just getting their feet wet in when it comes to recognizing the cultural significance of comic books, as well as the cultural importance of certain comic book characters, Crown has been fighting the good fight via information and discussion for some time now.

She is the founder of the Midwest Ethnic Conventions for Comics and Arts (MECCAcon) and co-founder for the Black Speculative Art Movement, along with HSSU associate professor and Humanities department chair Reynaldo Anderson.  On April 22, I’ll be moderating a panel on the Future of Black Media at the Black Speculative Arts Movement as it stops at the Bronx Museum of the Arts.

William E. Ketchum III of Complex, Janicia Francis of Tea with Queen and J., Nay Marie of Taji Mag, and Jordan Calhoun of Black Nerd Problems.  You can also catch Maia, along with other comic book industry experts and creatives, at the Third Annual Women in Comics Con at the Bronx Library Center. The even takes place from 11 am to 7 pm.