Last week I transcribed the audio from the DMC sponsored “Boom! Bap! Hip-Hop & Comics! 2014” panel discussion from the New York Comic Con back in October. From a journalistic perspective, some might consider that information to be a bit outdated. However when it comes to the relationship between Hip-Hop culture and comic books, no information is outdated. Moderated by Chuck Creekmur of Allhiphop.com, the panel discussion featured sincere testimony as to the manner in which comic books helped shape their lives from producer Young Guru, rapper-turned-producer and admitted geek Kwame Holland, DMC of Run DMC, DMC editor-in-chief Edgardo Miranda-Rodriguez, rapper Q-Unique of The Arsonists and music executive Riggs Morales. The esteemed gathering also relayed some very interesting insight into the unknown connections between comic book lure and some of our favorite hip-hop artists. Here we bring you part 2 of that discussion.

“Any of my rhymes, I would say 99 percent of them, would literally drop a quote directly from a comic book. There’s just no way out of it for me and it’s my earliest memories. I remember when I first discovered superheroes. It wasn’t about a color thing or anything to me. I thought all heroes wore a mask. I just thought Superman wore a pink mask. Everything I do is about imagery and symbolism and it is represented in everything that I do,” he continued.

Kwame is the proprietor of the online portal Geek Mode and its Facebook counterpart as well. In each of these groups Kwame leads the discussion of all things comic book and science fiction. Producer Young Guru chimed in to second Mr. Holland’s emersion into all things nerdy.

“One of the things that people don’t understand about Kwame is that he’s an example of when you’re actually of it,” he explained. “It’s not actually something that he turns on or turns off. He’s so of it that it’s naturally going to come out. While we were working on music, he’s noticing everything in my studio and is like ‘Okay, you’re more into Star Trek than you are into Star Wars.’ And the next time he comes back to the studio he has five figurines of Star Trek characters and they’re all sitting atop my speakers. The minutest detail, he’s watching and because he’s of it, it naturally comes out of his system. It’s like a Jedi seeing another Jedi. Like ‘this guy’s midiclorian level is like so far beyond.’

The comic book force is indeed strong in all who graced the panel with their presence, but Kwame is on another level. His memory is pretty good as well. Here he recounts one of the coolest comic book related stories of all time.

“Let me tell you a cool story. I was in the studio when Guru was convincing Jay Z why Kingdom Come needed to be named Kingdom Come and it was hilarious,” said Kwame.  “(Guru) brings in Kingdom Come (the classic Superman based graphic novel) and Jay is sitting there like ‘What the hell? Would y’all stop geeking out so I can do my thing?’ and Guru was like ‘Naw man, listen. You’re like Superman and you gotta convince these new cats to come back in line’ and Jay is like ‘Man…’ but for him, and even for me as a secondary observer, it was real. He was literally convincing this man about what he really was,” said Kwame, the sense of joy he exhibited in recalling the tale had already begun to electrify the audience.

It was at this point that Young Guru had to pick up the baton and continue telling the story from his point of view.

“A friend of mine named Lance, he used to work at Rock Star Games, and I were having a discussion and it just hit. The whole Kingdom Come series is the perfect layout for the comeback (of Jay Z). For those that don’t know, (in the story) people don’t appreciate Superman anymore so he leaves, and all the younger superheroes are taking over. Superman doesn’t kill anyone, he makes sure the pedestrian doesn’t get hurt when he’s trying to take down whoever the enemy is. Superman’s morals are very high. So when Superman leaves, all of the young superheroes don’t have any guidance or a moral code. They’re taking down the enemy, but they're like blowing up a building with a hundred people in it to do it. Like, they don’t know how to be a proper superhero. So it was blatant to me that the Kingdom Come series was the way that we should come back. But I had to convince Jay, who’s not a comic book reader, of this concept. Eventually it worked.” 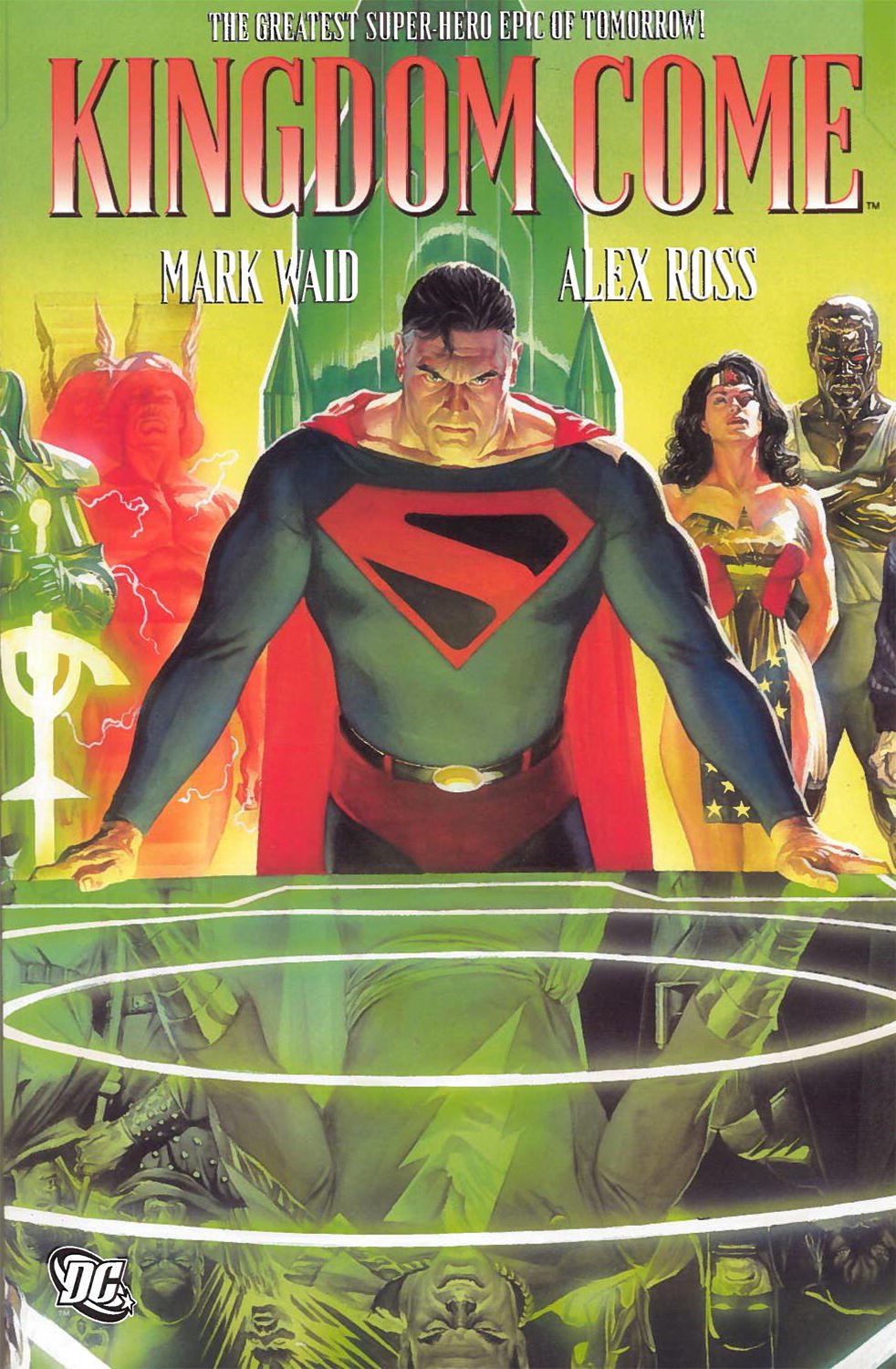 It most certainly did work and Jay Z has been plowing through these young “Heroes” in the game ever since. Superman and Jay Z? Great analogy. Maybe Nas can be Batman? The discussion of rappers with alter egos was a perfect segway for Chuck Creekmur who asked the panel a question that all in attendance anticipated; what superheroes do you most relate too? Creekmur said the Hulk, as did DMC.

“My favorite character has always been the Hulk, which some people think is weird. Even with Run,” said DMC. “He would be like ‘You’re the nice guy. Go over there and tell those people they can’t come in.’ The reason why it’s the Hulk is because I identified with him because he was misunderstood. The reason I love the Hulk is because I’m a real, real, real….sometimes I’m too soft. But you don’t want to get me mad. Crash through walls, knock down doors! My whole delivery, my whole presentation, my whole rhyme style was from comic books. I tell kids they only have two gangs, Crips and Bloods. We had 50 of them. Get your money taken, get your fresh Adidas taken. Life was crazy. Comic books gave me confidence, they educated me and they also taught me how to deal with the world.”

Hearing some of the biggest rap artists of all time discuss their eternal connection to the genre and it’s effect on their creativity was a joy for all to behold, hip-hop fan or not. DMC continued by telling the audience that the Hulk, and other comic book characters, were instrumental in helping him shape his entire rap persona.

“Joseph Simmons, Rev. Run, DJ Run, he knew ‘That kid Darryl McDaniels that goes to my school,” said DMC in describing how he joined Run DMC. “He’s a smart mother******. He’s got a great imagination from these comic books and he can write. So, we went to go make the first record, he calls me up. ‘Yo, D. Russell’s going to let me do this record. Grab your rhyme book. True story, we go to the Green Street Recording Studios and we’re going down the stairs and all I knew from hip-hop was techniques, mixers, turntables, microphones, Cold Crush, Fantastic Five and all of that. So we go into the studio with the gold plaques on the wall, I’m pretending I’m in a comic book. So he would bring me a beat I would be like ‘What would the Hulk do to this beat?’ Naturally, crash through walls. When I heard ‘Hit it Run’ I thought, what would Spider-man do?’ I wasn’t the kid that wanted to make ‘King of Rock’, but because I had comic books I could create the alter ego.”

How dope is that? In addition to helping shape his rap persona, comic books are now an integral part of his future with his new publishing imprint Darryl Makes Comics (DMC). The self-titled debut book from the company was released in October and finished right behind Joker Death of the Family and Justice League Vol. 1 Origin to place 153 on the list with approximately 932 copies sold in early release. The November tally is certain to be better.

We continue our journey through the world of comic books as they relate to contemporary urban culture next week. Make sure you come back; same bat channel, same bat station.