Mark Gruenwald died on August 12, 1996 just months after his 43rd birthday from a massive heart attack due to a congenital heart defect that went undetected throughout his life. When a genius dies, those who ply their artistic wares in the same manner as the deceased mourn them for a long time. For the fans who enjoyed his works, Gruenwald is certainly a barometer for what a versatile, all-around comic book creator is or can be. But as time goes by newer generations of artists and enthusiasts need to be reminded of what greatness is.

Earlier this week on June 14, Gruenwald’s widow, Catherine Schuller-Gruenwald, hosted a soiree to commemorate the 20th anniversary of his death, as well as to celebrate what would have been his 63rd birthday (June 18), with many of his former Marvel Comics colleagues, fans, friends and family members.

Gruenwald was best known for his ten-year stint as a writer for Captain America from 1985 to 1995, but Squadron Supreme was his most commercially successful book. 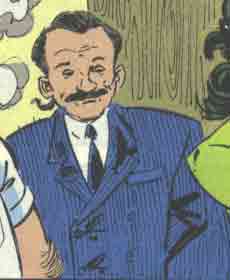 (Gruenwald makes an appearance in She-Hulk)

The Shadow League was in attendance as well as a large portion of Marvel’s brain trust from throughout the ’80s and part of the ’90s. Being that Captain America was one of my favorite characters coming up, it was only appropriate that I was in the building to represent to the fullest, and to pull quotes from those that knew him best.

The festivities included a panel discussion in memory of Gruenwald, as well as an art gallery that included works from Ray Ayala of Fantasy in Color and other artists. It was an all-around party atmosphere at Space Ibiza on midtown Manhattan’s west side. On hand were former Marvel editor-in-chief Tom DeFalco (also wrote Spider-Man: Maximum Carnage, Spectacular Spider-Man, Fantastic Four, The Amazing Spider-Man among other notable works), Janice Chiang, letterer for Transformers, Rom: Space Knight, Conan the Barbarian, Alpha Flight and many others), writer, editor and inker Carl Potts, best known for creating the series Alien Legion, former Spider-Man editor Danny Fingeroth, and a host of other comic book industry veterans. (Cover of a book written by Gruenwald)

“In 1980 I returned to Marvel Comics and Mark Gruenwald was DeFalco’s Assistant Editor,” said Janice. “So, I started working with Mark on every series that they worked on in that office, but I’m the sole letterer on D.P. 7, Squadron Supreme, and various Captain America stories that he had written. In a male dominated industry, Mark was a gentleman and he always was very supportive of the work I did. So far, I think I lettered about 2,600 graphic novels and stories.”

Though the evening was an ode to the legacy of Gruenwald and his considerable genius, Tom DeFalco is no slouch in the legacy category either. He entertained the audience with a funny anecdote that revealed just how much of an unapologetic practical joker Mark was.

“When I first joined the Marvel staff, Mark was assigned as my Assistant Editor,” said DeFalco. “They stuck us in a little quad because they had no office space then. The only way we could fit in is we had two desks that faced each other. Mark and I sat across from each other and passed artwork back and forth to each other. We spent a lot of time discussing the characters in that universe.” 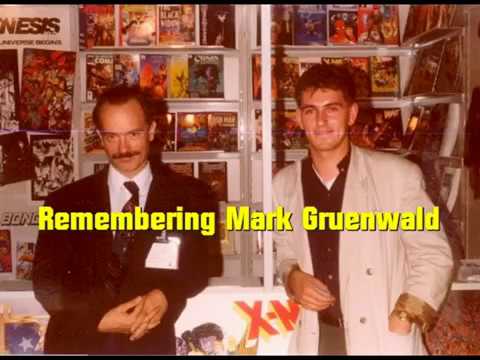 “It’s weird talking about Mark and what he contributed to the (Marvel) universe and to comics and that sort of thing, but often when I think of Mark and I think of one night a million years ago in Oakland, California,” DeFalco continued. “We were there for WonderCon, a comic book convention. About 1 o’clock in the morning or so, after a lot of editorial work at the bar, I stumble up to my room because I had just one desire and that was to collapse in my bed. I remember I got into the elevator, the elevator doors open on my floor and what greets me but a big sign written in Mark’s handwriting ‘Tom DeFalco is signing autographs 24 hours a day, room number so-and so, please knock.’

“So, I took that poster down thinking ‘I’m gonna kill him.’ I walked into my room, snapped on the light and looked out the window. All of my underwear and socks were hanging outside the window. Again, I knew whose fingerprints were all over this.”

(Cover of a book written by Gruenwald)

“A lot of us who work in comics are introverted by nature,” added Carl Potts. “Mark had a weird way of being introverted some of the time and totally extroverted in others. His total enthusiasm for everything he did, whether it was Marvel related or music related or whatever, he approached it with such enthusiasm that it was infectious. He got a lot of us to do silly stuff that we would have never done had Mark not asked us to. Mark was a guy who tried to get everybody involved in things.” Even to this day, Mark Gruenwald’s works are as cherished by comic book fans as his camaraderie and levity were by those who knew him best. When I asked an anonymous Marvel editor what he believed Mark would say about the recent revelation that Captain America was now retconned to be a Hydra Agent, he sneered and said no comment because he didn’t want to get in trouble.

In his will, Mark Gruenwald told his widow that he wanted to be cremated and have his ashes placed in ink to be used in a comic book. As per his wishes, his ashes were used on the first printing of the Squadron Supreme trade paperback.

His legacy lives on in other ways as well. The Amalgam Comics title The Exciting X-Patrol #1 (June 1997) was dedicated to his memory and DC Universe named a Gotham City skyscraper Von Gruenwald Tower in his name as well. He has a daughter Sara, who was only 10 years old at the time of his passing.

Proceeds from the event go to help fund the Mark Gruenwald Scholarship for the Arts at the University of Wisconsin – Oshkosh.