When it comes to racial insults and epithets, Val James has pretty much heard and seen them all.

From old men he’s never been formally introduced to screaming at him with hatred in their eyes, to youngsters not old enough to know better, he’s heard the catcalls and read the signs.

Remarkably and courageously, he countered those incidents with the only thing he could do – he ignored them and played hockey.

Yes, hockey. And James played it well. In fact, he played it so well that he became the first U.S.-born African American to play in the National Hockey League.

The first Black man to play in the NHL was Canadian Willie O’Ree, who broke the unspoken racial color barrier in 1958 when the Boston Bruins called him up for two games. O’Ree’s first game in the NHL was Jan. 18, 1958 against the Montreal Canadiens.

That was 11 years after the late Jackie Robinson broke Major League Baseball’s color line by playing for the Brooklyn Dodgers in the season opener on April 15, 1947 against the Boston Braves. The late Earl Lloyd became the NBA’s first Black Player on Oct. 31, 1950 when he played for the Washington Capitols against the Rochester Royals in the season opener. 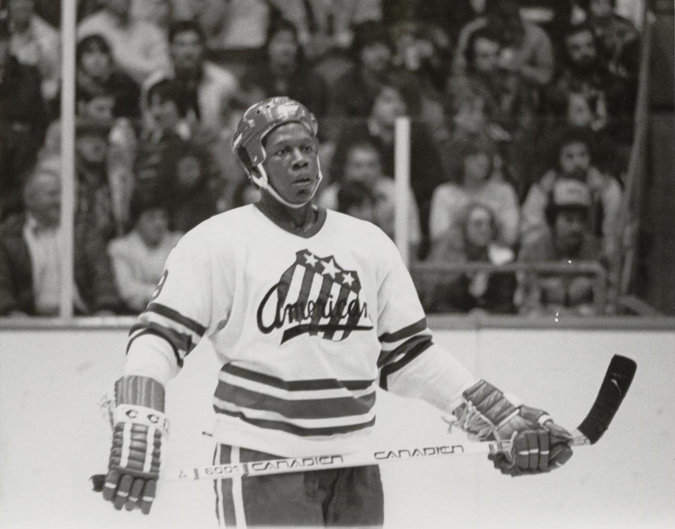 James, whose given first name is Valmore, remembers his first NHL game as if it were moments ago. It was Nov. 1, 1981 against the Philadelphia Flyers in Buffalo Memorial Auditorium. Like O’Ree 23 years before, he too was an injury call-up.

“It was a great experience,” James told The Shadow League. “To finally make it to the NHL after spending years in the minors… it was a great feeling. It was what I was working for.”

His arrival to the NHL was downplayed. The league and the club didn’t make any special announcement. A crowd of 15,670, just shy of its 15,858 capacity, saw the Sabres defeat the Flyers 6-3.

James remembers thinking about his father, the late Henry James, and how supportive he was when he played minor league hockey.

As for the game, he recalls being checked hard against the boards by Kenny Linseman, who was nicknamed “The Rat.”

“He bounced right off me,” said James. “I remember staring down at him but nothing happened. We just continued to play.”

James was then assigned to the minors until March 20, 1982 when he returned and played in six of the last eight games.

From 1978-79 to 1987-88, James played with several minor league teams. In addition to being called up by the Sabres, he was also a call up of the Toronto Maple Leafs. All totaled, he played in 11 NHL games. He didn’t score a goal or record an assist but he did register 30 penalty minutes and gained the reputation of being a rugged enforcer who didn’t mind throwing a few jabs.

His battles with enforcers such as Boston’s Terry O’Riley, Philadelphia’s Dave Brown, and the late John Kordic who played for several NHL teams including the Montreal Canadiens, Toronto Maple Leafs, Washington Captials and Quebec Nordiques, are part of NHL lore.

“I played the game hard,” said James. “I went out there every time to help my team win. I didn’t go out looking to pick fights but I wasn’t going to let anyone take advantage of me. If someone checked me hard, I checked them hard. I wasn’t backing down.”

James, who later penned a book, “Black Ice: The Val James Story,” with John Gallagher, was born in Ocala, Fla. His family moved to Long Island, N.Y. in the early 1960’s. His father was a migrant farmer and the family lived in a one-room house on the farm. There was no electricity or running water. The family used a potbelly stove for cooking and heating and utilized an outhouse.

Henry James got job at the Long Island Arena and as the nightwatchman and later became the arena handy man. That enabled his son to get front row seat to events from concerts to Eastern Hockey League games featuring the Long Island Ducks. He got his first pair of skates at 13 and used the area as his personal practice facility.

Val James’ skating skills improved quickly. He was the 16th round draft choice of the Detroit Red Wings in 1977 and joined the Sabres as an unrestricted free agent.

“Val’s story is so improbable yet its so amazing and inspirational,” said Gallagher, who is a federal prosecutor working in Philadelphia. “He came out of nowhere to develop his skills and become a professional hockey player.

“The abuse he took, from the [racial] chants to people throwing objects on the ice, was tough. He could’ve easily become a bitter man, but he didn’t. That shows something about Val’s character. He showed that he could rise above it all and he did.”

A shoulder injury eventually ended his playing career but James’s 11 NHL games were legendary and helped develop a trail that has since been followed by players such as Wayne Simmonds and P.K. Subban.

In the minors, James’ hard play garnered him the reputation of being a winner and an enforcer. He played in 630 games with 45 goals and 77 assists. He also had more than 1,175 penalty minutes. In Rochester two years ago, they celebrated his hard-nosed play with a Val James Night.

“I think about it often,” said James. “It was such an honor. It was something that I never expected. The people in Rochester treated me very well. I wanted to go out and play well for them. We won a [1983] Calder Cup and it was a pleasurable experience.”

That more than made up for the night in Boston when angry fans cornered the Sabres’ team bus and chanted “Send the n—er out!” James wanted to oblige them but it was Sabres coach Scotty Bowman who told him to sit down.

Val James cried that night. He will never forget the incident.

“That was a tough night,” said James. “The outcome could’ve been much worse.”

Time has healed many of the wounds, but there are moments when James reflects on what he’s been through. It’s a natural reaction to unnatural acts that were done to hurt him.

“When I wrote the book, it became very therapeutic,” said James. “I was finally able to say how I felt about what happened to me and it felt good to get that off of my chest. Finally, I got closure.

“I think the game has changed a lot since I played. There are people like [Wayne] Simmonds [the MVP of the NHL All-Star Game] who are playing the game and excelling. They are showing how to play the game hard and how to succeed. All they need is a chance. Those guys are making a difference.”

Just as Val James did decades ago.