Once again, it was all about MLBs Black Knights Andrew McCutchen and Adam Jones in this historic World Baseball Classic. With an annoying but uninhibited drizzle falling throughout the entire game and a slight eerie mist moving through the stadium, as one MLB Network announcer put it, Andrew McCutchen has saved his biggest moments for when they counted most.

McCutchen came through with a huge two-run double on Saturday against the seemingly invincible Dominicans to lift Team USA past the WBC favorites. On Tuesday, just when the Japanese pitching seemed to be too much for Team USA, the former NL MVP ripped an RBI single in the fourth inning to crack a pitchers duel and give the USA a 1-0 lead.

Runs would prove hard to come by for both squads and in those kinds of tight games, the team that makes the least mistakes wins.

With the score tied at 1-1 in the top of the eighth, Adam Jones’ fielder’s-choice RBI grounder was bobbled by Japan third baseman Nobuhiro Matsuda long enough to allow Brandon Crawford to score from third base.

The pitcher was all in my kitchen, Jones told MLB Network in an interview immediately after the game, “… but its fortunate that (Japans third baseman) bobbled the ball. 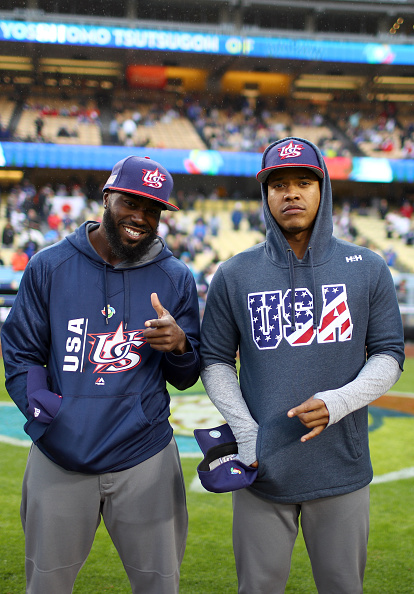 Puerto Rico touched Stroman for four first-inning runs in his first WBC start against them less than a week ago. The USA couldn’t recover and loss 6-5. This time around, expect Stroman to be locked in early with so much history and patriotic pride at stake.

Four years ago Team USA found themselves in the position they were in on Tuesday night, facing the crafty, well-oiled and fundamentally sound Japanese team, winners of the first two WBCs in 2006 and 2009.

Japan won that game and eliminated the mighty Americans from the tournament. This time around, Team USA had the soul patrol in the outfield and the baseball gods behind them.

Both Jones and McCutchen have long been considered the premier African-American position players in the game. Their statistics over the past five years ranks prominently among the games most lethal performers. They both have five All-Star appearances and have won five Gold Gloves between them.

More importantly, they have been the offensive catalysts and defensive dynamos for contending squads. So to do it at the WBC, when the games mean so much and are viewed on a global stage, aint a thang but a chicken wing.

When reminded after the game that his team had accomplished something unprecedented, Jones wasnt ready to celebrate too much yet.

Unfinished business, Jones said. That was a great game on both sides. I tip my hat to Japan. We get a chance to see Puerto Rico again.

Brothers balling in the WBC has definitely been the theme for Team USA. So as much as we praise the WBC for putting the growing culture of baseball and the many talented players from all over the word on rare display, the WBC has also reminded us how integral a part of the success of American baseball African-Americans have been and continue to be.