According to the Division I Committee on Infractions panel, Syracuse did not control or monitor its athletics programs and Boeheim failed to monitor his program. The infractions ranged from impermissible academic assistance and booster activity, failing to follow its written drug testing policy and an overarching vague statement about Boeheims failure to promote an atmosphere of compliance and monitor his staff, as well as the universitys overall lack of institutional control over its athletics program.

There are a few things that spring to mind when I hear the terms Failure to promote an atmosphere of compliance and Lack of institutional control.

First and foremost is the Jerry Sandusky scandal at Penn State. When an entire university is found culpable of not only knowing about, but enabling a monster who systematically raped young boys over a span of decades, that seems to suffice with how I view a supposed lack of institutional control. Penn State was so concerned with the image of their celebrated culture of football, and the esteem and reverence that head coach Joe Paterno was held in, that it entirely distorted its value system. Innocent children being victimized mattered less than the evil, criminal proclivities of their long-time defensive coordinator.

In 2006 and 2007, 61 athletes at Florida State, across ten different sports, were involved in an academic cheating scandal. They were taking online classes where they were supplied answers to exams and had their work completed for them. Now that sounds like something that was institutional.

How about those reckless and lawless National Championship football teams at Nebraska and Oklahoma in the 1980’s, where drug-dealing, rape, gun-play and domestic violence ran rampant? How about former Colorado football coach Gary Barnett who enticed recruits with drugs and sex with strippers?

Or the Ponygate scandal at Southern Methodist University, where a bottomless slush fund kept recruits and star players flush with cash from the 1970s through 1986, ultimately resulting in the NCAA handing out the so-called death penalty?

Does anyone recall what happened at the University of Georgia when Jim Harrick was the hoops coach? He and his son, not some faceless tutor from athletic support services but the actual head coach, gave players As in classes that they were supposed to be teaching. The hilarity in that is that it might have looked somewhat legit if the players actually attended. Now theres a head coach for you that definitely failed to promote an atmosphere of compliance.

How about that legendary general, Bobby Knight, getting caught on camera choking Neil Reed, a Hoosiers player, during practice? I guess its safe to say that Knight had a lack of self-control, along with fostering and encouraging an atmosphere of verbal and physical abuse. But you didnt hear that from me, cause I aint one to gossip. 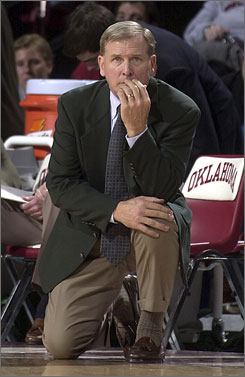 How about the Pell Grant scandal at the University of Miami in 1994, where the schools academic advisor falsified government applications for 80 student-athletes? Over $220,000 was funneled to football players as a bonus, on top of what the boosters were paying them, in what federal officials later described as perhaps the largest centralized fraud ever committed in the history of the Pell Grant program.

I could go on and on, but will end this exploratory discussion on what transpired at Baylor in 2003 when basketball player Carlton Dotson murdered his teammate Patrick Dennehy. The circumstances were extremely sad and unsettling, but the case grew more bizarre when head coach Dave Bliss, in trying to cover up the money he provided for Dennehy when he was not on scholarship, instructed his players to lie to investigators by repeating the fabricated story that Dennehy, his dead student-athlete, was selling drugs.

Now these are some lack of institutional control cases for your hind parts.

Im not saying what happened at Syracuse merits a simple slap on the wrist, but the labels affixed to what went down is hardly warranted. The school, did in fact, self-report many of the violations.

But I cant be mad at Jim Boeheim because some rogue booster gave $8,000 to three football players and two hoops players for volunteering at the YMCA. If theres one thing I can be mad at him for, its that a lot of the impermissible academic assistance came to light because of the Fab Melo fiasco, where the Brazilian defensive specialist always seemed to skate across the thin ice of impending academic ineligibility. 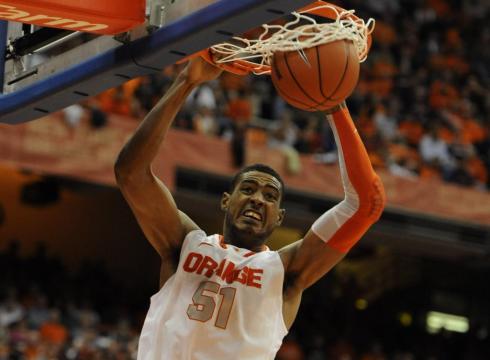 If youre gonna bend the rules, bend them for a transcendent player, not for a scrub that averaged five points and four rebounds per game!!! But I digress.

I agree wholeheartedly with ESPN analyst Jay Bilas, who said on Saturday mornings Gameday broadcast, I believe in reasonable rules that are fairly applied and fairly adjudicated. I don’t believe that that’s the case here.

The punishment handed down was among the harshest ever given out by the NCAA for similar infractions.  Boeheim has been banned from coaching in nine ACC games next year and 108 of his victories have been vacated. They also placed Syracuse on five years of probation, reduced the programs scholarships by 12 over a four-year period, and insisted that the university return the revenue from appearances in three NCAA tournaments, which amounts to approximately $1 million.

Syracuse had already self-imposed a number of other penalties, including banning itself from participating in this years postseason.

During a press call Friday, Britton Banowsky, chief hearing officer and commissioner of Conference USA, said, Our first step is to be deferential to the university system, but ultimately we had a situation where the desire to achieve success on the basketball court overrides the academic integrity. It really demonstrated some clearly misplaced priorities, and thats where the NCAA process comes in.

Thats an interesting choice of words, considering the misplaced priorities that have been institutionally innate in the NCAA forever, and how theyve systematically exploited athletes for their own financial gain, the same athletes that have generated hundreds of millions of dollars for the organization and its member schools.

From the Player Union case at Northwestern, the concussion lawsuits in football, the Shawne Alston case where the former West Virginia football player filed suit against the NCAA and the five major conferences alleging that the schools have long violated antitrust laws by limiting an athletic scholarship well below the full cost of attendance, the Jeffrey Kessler anti-trust case, where the famous labor lawyer alleges that the NCAA, Big Ten, Big 12, SEC, ACC, and Pac-12 have colluded to fix the price of players, and the Ed OBannon case, where the plaintiffs are asking that a portion of television revenues be put aside to go to the players, since its their likenesses that make the television rights and video games so lucrative, its evident that the issues of player pay, scholarship amounts, continuing  health benefits, and the entire basis of amateurism are all colluding to enact a major shift in the university athletic model and how the business of how college sports will operate and change in the future.

But right now, as it seems to always happen, the only folks being punished are the student athletes themselves. Its a shame that 12 scholarships will not be handed out over a four-year span, and that a fantastic young player like Orangemen senior Rakeem Christmas could not participate in this years NCAA Tournament due to the actions of others, actions that took place years before he ever arrived on campus.

Thats the tragedy in all of this. And I love Jay Bilas suggestion. On the Gameday broadcast on Saturday, he asked Shouldn’t we start holding presidents, chancellors and the heads of departments accountable? What we’ve got is the perfect system of non-accountability for administrators. They lay it all on the coach.

I dont know what Boeheim knew and when he knew it, but I do know that his contributions to college basketball merit more than being excoriated for infractions that are pretty minor on the ladder of cheating in college sports. Should there be a punishment? Yes, but the rules dont seem fairly applied and adjudicated here.

Because the people who will really suffer are not the those skirting the rules, but the kids who wont receive a scholarship to Syracuse in the next few years, along with Rakeem Christmas, his current Syracuse teammates and the ones who follow in their footsteps, players who will continue to get jerked around for a number of years for something they didnt even do.