As the 2016-2017 football season approaches, students and fans get ready to cheer on their Bison football team at the AT&T Nations Football Classic on Sept. 17th.

The Hilltop would like to introduce three senior players who deserve your support in helping Howard rack up more Ws than in recent seasons.

The Bison have a 6-17 overall record the last two seasons, but these seniors are a few of the reasons why the entire college campus is excited by the prospects of posting our first winning record since the 2013-2014 season when HU finished 6-6.

Preseason polls have ranked Howard 10th in the MEAC, so the contributions of these three seniors will be imperative if they intend to shock the conference.

Nathan Lewis Jr., a senior administration of justice major from New Orleans, Louisiana, began playing football in the ninth grade. Lewis family is his motivation and the driving force behind his progression as a center for the football team. He prides himself in playing at a consistent level for [his] squad. 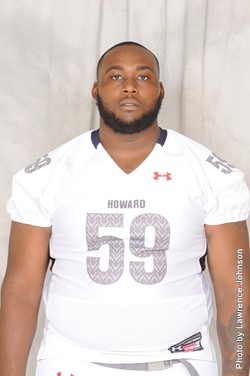 In regards to the upcoming season, Lewis said, Fans should expect this season to be a great one and an exciting one as well.

Toree Boyd is the next Bison in the spotlight. Born in Nassau, Bahamas and raised in Miami, the senior administration of justice major began playing football at the tender age of five. Seventeen years later, he hasnt let it go.

As the Howard University 2015 Offensive Player of the Year, the right tackle, prides himself on having received the Mid-Eastern Athletic Conference (MEAC) weekly honor three times, earning a spot on the second team all MEAC and starting 35 games during his career.

I want better for my mom and siblings, Boyd said. I want to make sure my mom never has to work again, so I stay motivated everyday to achieve my dream goal.

The third player is senior, cornerback Travon Hunt, who is recovering from an injury and is taking a medical redshirt this season, as he won’t be fully recovered until November. As a leader, however, Hunt is still an integral part of the team and his presence will serve as an inspiration for other players.

A native of  Shelby, North Carolina, Hunt is an administration of justice major. The game is nothing new to Hunt, who has been playing football since the first grade. He professes that football is the only sport he ever truly loved to play. He too credits his family with pushing him to achieve on the field.

My motivation is to make my family proud and to help my parents out with the struggle of taking care of my six other siblings and myself, Hunt said. I am the oldest out of seven kids. I really want all of them to be taken care of with no problem. After the season, Hunt was named the Defensive MVP of the team and made the All-MEAC team for their conference. He was also credited with leading the conference with five interceptions.

Though he won’t be on the field to lend his defensive mastery to the mix, Hunt says he’s staying positive. Hunt tells The Hilltop, People should expect a lot of energy and motivation, to succeed past adversity.

This season could be one for the books.