The Funion is a semi-regular satire column that appears on The Shadow League.

They got wild for the night, and through daybreak, and by the time they were ready to blame it on the Al-al-al-al-al-alcholol, had created an international incident shrouded in lies and deception that further perpetuated the image of the “Ugly American” abroad and the most embarrassing Olympic/Athletic international tempest in quite some time.

In case you’ve been living under a rock over the past few days, Lochte and his teammates Jimmy Feigen, Gunnar Bentz and Jack Conger, otherwise known as Larry, Curley and Moe, said they were robbed at gunpoint while returning to the athletes’ village before dawn last Sunday.

The sympathy poured in, Rio’s public image as a paradise infested with ghetto criminality was enhanced, and athletes and fans were in fear of stickup kids and/or corrupt cops trying to stick them for their papers.

A spokesman for the Rio Olympics issued a public apology to the swimmers for, “…the violence they have been through.”

But after further investigation, the Rio authorities called cockadoodee. Bentz and Conger were pulled off of airplanes trying to leave the country so they could be questioned further.

Lochte, meanwhile, already having returned to the U.S., began changing his story up like Kaine being interrogated by Bill Duke in Menace II Society.

This exclusive photo has recently surfaced from Lochte living it up at the party, moments before the incident.

Most recently, reports have surfaced saying that the swimmers weren’t robbed, but were confronted after vandalizing and destroying property, and urinating outside at a gas station in true spoiled, frat boy, rock star fashion.

With the true story continuing to emerge, The Shadow League obtained some of the actual statements that Ryan Lochte gave the Rio police when he’d first claimed that he was robbed.

Here’s what our investigative team has been able to dig up.

Rio Police: Did the robbers do that to your hair?

Ryan Lochte: Nah, I blame that on the Goose, it had me fooling loose. I blame it on Patron, it had me in the zone.

Rio Police: Good, I would hate to think we were responsible for that. So what happened?

Ryan Lochte: Let me start off by saying I’m not a crook, I did not have sexual relations with that woman, read my lips, “No new taxes”, and Barack Obama founded Isis.

Rio Police: You’re not making any sense right now. Are you drunk?

Rio Police: So what happened, you got robbed at gunpoint?

Ryan Lochte: I’m very glad you asked me that question. Check it out your honor, right. Boom! We was driving down the street minding our own business right, and these guys posing as police officers was like, “Yo, there goes Ryan Lochte!”

One of them was like, “Yo, F*** Ryan Lochte! That man got to get got, ya feel me?” Next thing I know, we was surrounded by like 157 cops with badges. No lights, no sirens, no soy sauce, no nothing.

Ryan Lochte: Word to my mother! At least that’s what I told her a few minutes ago when I first made this up, I mean, told her what had happened.

Rio Police: So what happened next?

Ryan Lochte: They pulled us over and told us, “Get up out the car!”

Ryan Lochte: Yeah, he’s one of my favorite movie characters. I love make-believe people in the movies, and was like, “If that ever happens to me, I’m going out hard, like cousin Harold.”

Rio Police: So what happened next?

Ryan Lochte: I told Larry, Curley and Moe, I mean my other teammates who were white-boy-wasted with me in the car, “Ayo, I ain’t going out like no punk.”  They told them to get out and get on the ground.

Rio Police: Didn’t Tommy Buns say that in Belly when he and Sincere were in Nebraska, when he ran through the red light?

Ryan Lochte: Tommy Buns is another one of my favorite movie characters.

Rio Police: You have a lot of favorite movie characters. Who’s your favorite?

Ryan Lochte: Hands down, it’s The Great Gatsby. Now that guy can tell one helluva lie. Everything on the outside looked beautiful, but inside there was such great emptiness.

Rio Police: Now you’re finally beginning to make sense. So what happened after you told the 157 gunmen that you weren’t going out like no punk?

Ryan Lochte: I was like, “We didn’t do anything wrong, so I’m not getting down on the ground.” And then the guy pulled out his gun, he cocked it, put it to my forehead and said “Get down.”

I was like, “A’ight, I’ll get down, like James Brown,” and started to get my boogie on. I kept flashing my 12 Gold Medals, saying, “I paid the cost to be the boss! Look at me. You know you see? You see a bad mutha!” But he wasn’t really feeling that.

I was like, “Alright! Alright, big man? You wanna make some big bucks? Lets see how tough you are. Do you know something ’bout cocaine?”

Rio Police: Are you kidding me or what?

Ryan Lochte: There’s a bunch of Colombians coming in Friday. New guys. They say they have two keys for us, for openers. Hotel in Miami Beach. I want you go over there. If it’s what they say it is, you pay ’em and bring it back.

You do that, you get 5 grand! Be at Hector’s Bodega at noon Friday. You get the buy money then. And chico! If anything happens to that buy money, oooh pobrecito! Michael Phelps is gonna stick your heads up your butts faster than he swims an individual medley! 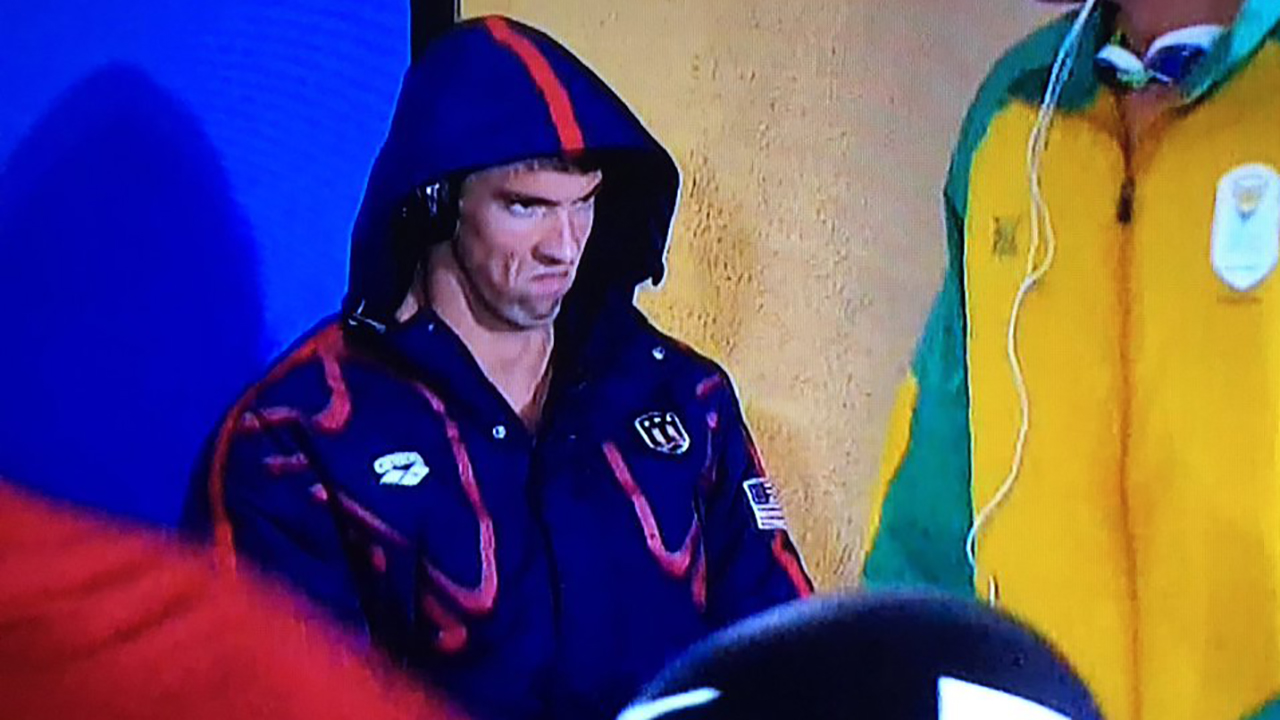 Rio Police: Dude, there’s something wrong with you. So how did this robbery end?

Ryan Lochte: I threw my hands in the air, waved ’em like I just don’t care, and went full Redman on those clowns, like, “Whatever, Man!!!” They took our money and our wallets.

Rio Police: Ummm, okay, if you say so. Anything else you want to add before I write up a formal report? Because this sounds like, to quote one of my favorite movies, which you guys totally remind me of, the mating of a bulldog with a Shih-Tzu.

You do know that, more than likely, there’s a very strong chance that we’ll be speaking with you again before you go home right?

Ryan Lochte:  I want to ask you a question, straight out, flat out, and I want you to give me the honest answer. What do you think the chances are of me getting another six-pack of Schlitz at 7:00AM? And, do you think anybody will believe what I just said?

Hit me with it! Just give it to me straight! I came a long way just to trash a gas station and urinate all over the place, lie about it, cause an international incident and lose any and all credibility as a public figure from here on out… The least you can do is level with me. What are my chances?

Ryan Lochte: You mean, not good like one out of a hundred?

Rio Police: I’d say more like one out of a million.

Ryan Lochte: (After a long pause, breaks into a grin) So you’re telling me there’s a chance.  USA! USA! USA!