This weekend’s slate is loaded with some great matchups that will go a long way in determining the national championship picture.

No. 6 TCU vs No. 5 Oklahoma – Baker Mayfield has separated himself from the pack to become the clear-cut front-runner for this year’s Heisman Trophy. His performance in last week’s Bedlam Rivalry against Oklahoma State will be hard for anyone else to top. Mayfield threw for 598 yards and five touchdowns against the Cowboys, solidifying his status as an all-time great.

But this weekend, he’s facing a defense that could provide his stiffest test yet. TCU’s unit is among the best in the country, and their overall squad is the most complete that Oklahoma has seen thus far.

As prolific as there passing game is, the Sooners ground attack has been steadily improving. The more production they get in the running game, the more things open up for Mayfield to work his aerial magic. Rodney Anderson has rushed for 439 yards over the last three games, but the Horned Frogs are first nationally in rushing defense, allowing less than 70 yards per game. The TCU defense has been playing lights out as of late, allowing just 6.8 points and surrendering an average of a mere 188 total yards over there last four games.

The winner will stand alone atop the Big 12 rankings with an excellent chance of securing a playoff berth if they can remain unbeaten for the remainder of the year.

No.1 Georgia vs No. 10 Auburn – Auburn’s offense has found its groove since their 27-23 loss to LSU last month. Quarterback Jarrett Stidham and running back Kerryon Johnson, who collectively account for 369.4 yards of offense per game, have been one of the more dynamic one-two punches in the country.

Georgia’s defense is incredibly stingy, allowing less than 12 points per game. Only one team, Missouri, has scored at least 20 points against them.

The Bulldogs have an absolute gem in freshman quarterback Jake Fromm, who has been playing like a poised upperclassman from the moment he took his first college snap. From has thrown for 1,459 yards and 15 touchdowns this year, and he’s aided by one of the best running back tandems in the country in Nick Chubb and Sony Michel, who average a robust 6.2 and 7.9 yards per carry respectively, with both of them having scored nine TD’s.

Auburn is considered by many to be the best two-loss team in the country, and Georgia is now playing under the heavy pressure of being undefeated and the top ranked team in the country. Their performance on the road against the Tigers will prove if they’re up to the challenge.

No. 3 Notre Dame vs No. 7 Miami – This will be the first time since 1989 that both teams have been ranked in the top 10 at the time of their meeting, and it’s the renewal of a classic college football rivalry, hearkening back to those days in the ’80s when the Fighting Irish and the Hurricanes were consistently in the national championship mix.

Notre Dame’s only blemish this year was a one-point loss to top-ranked Georgia. Miami, despite being undefeated, feels disrespected and underappreciated by the national media.

The Irish get busy with an exceptional running game that averages an incredible 325 yards a game. Running back Josh Adams has been a beast, as has fleet-footed quarterback Brandon Wimbush. They don’t try to fool you with the deception of a triple-option attack, either. They simply line up in front of you and play some old-school, smash-mouth football. 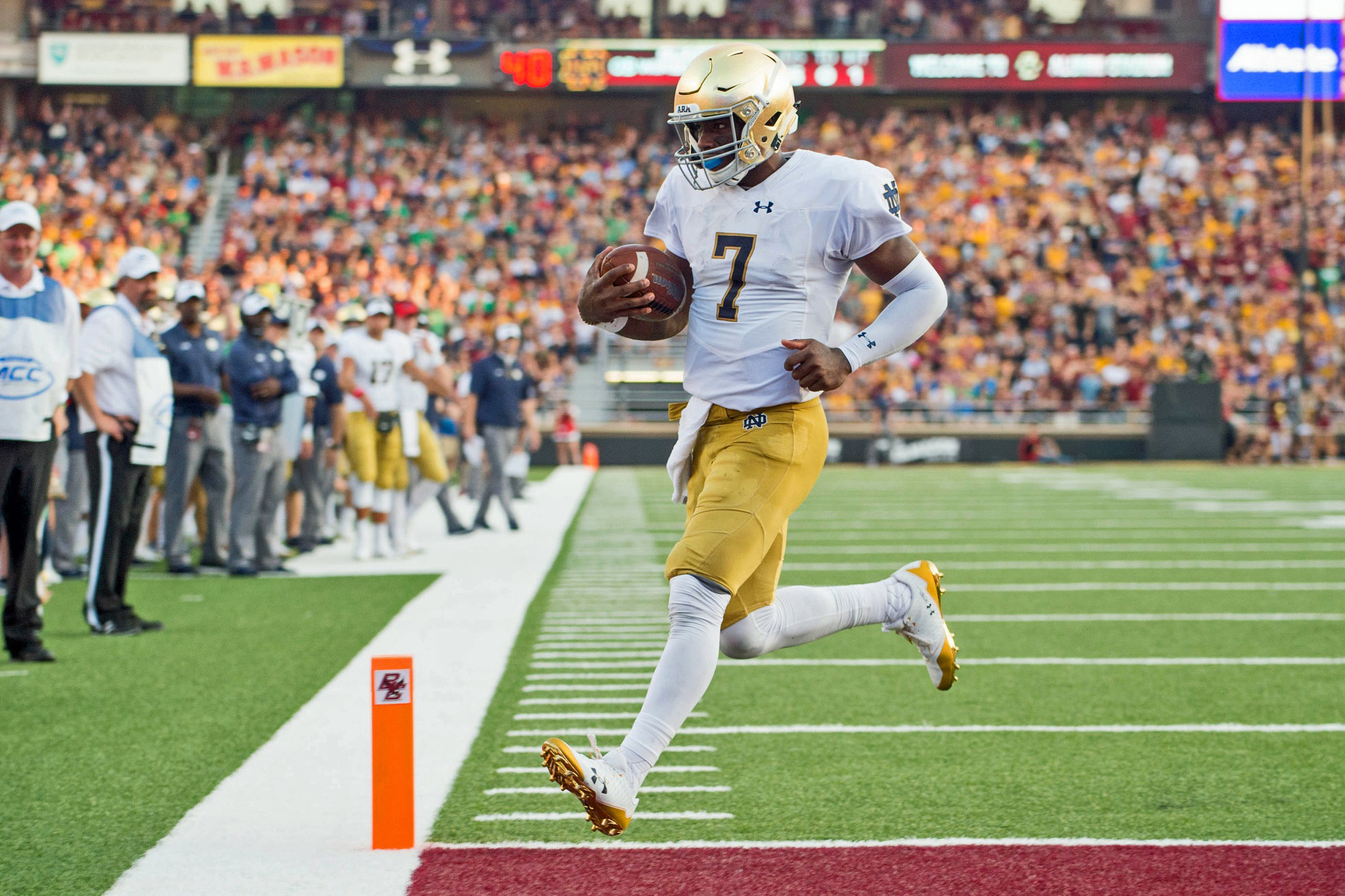 Their running game will provide a stern test for Miami’s defense, which hasn’t been so great in stopping the run. They were gashed by Syracuse, Georgia Tech and Florida State to the tune of over 200 rushing yards. But they lead the nation in tackles for loss with 8.8 per game. If they can’t contain Notre Dame’s rushing attack, they’ll be in trouble.

Miami needs to be able to score on big plays, which the Irish, who’ve only allowed four scores on the ground this year, don’t normally give up. The Canes have the nation’s longest winning streak, with 13 in a row dating back to last year. Meanwhile, Notre Dame has won seven in a row.

Its been nearly three decades since these two programs played a game with so much at stake. College football is a lot more fun when these two teams are good. It’s even better when they play one another this late in the season with so much on the line.