Fans of The Walking Dead have been waiting a long time to find out the fate of its favorite post apocalyptic survivors. And boy was it something. Based upon editing and directing tactics used in the past, it was pretty clear beforehand that this episode wouldn’t be straightforward with the answers.

One of the very first scenes of the of malice was the mashed and mangled cranium of a then still unknown victim of Negan’s spiked, razor wire-adorned baseball bat, Lucille.

The last episode of season 6 ended with Negan, played by actor Jeffery Dean Morgan, giving a rather chilling monologue to the vanquished inhabitants of Alexandria, including Rick, Carl, Daryl, Michonne, Maggie, Eugene, Sasha, Rosita and Abraham. They’re completely surrounded by dozens of Negan’s Saviors, and Negan has already told them that he plans on killing one of them to send a message.

At the close of last season, there may have been some inclination on the mind of Rick, played by Andrew Lincoln, that would lead us to hope our protagonists may have a way out of this. Nope!

The entire season 7 premiere was to illustrate to the characters, and especially the fans, that things were going to be changing – drastically so. Sensing that what he had done may not have been enough to scare the stubborn, volatile Rick Grimes that viewers loved, or hated, into submitting, Negan ups the ante. But we’ve seen this before, right? After fighting off the killing Shane, fighting off the Governor and defeating the Wolves, it may have been expected by fans that this too would pass. Nope! 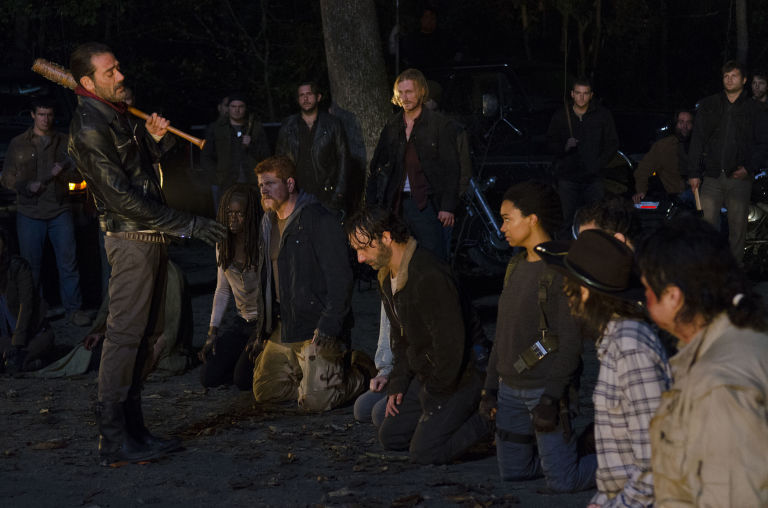 After dragging Rick into the RV and going for a drive, Negan’s mind games continue as he places an ax within reach of Rick and taunts him by turning his back and daring him to grab it. He does so only to have Negan wheel around and points an assault rifle in his face. Negan continues toying with him by tossing the ax onto the top of the RV and demanding Rick to brave a field of walkers to retrieve it.

Rick does so. But it is while he’s on top of the RV that Rick flashes back to the death of Lucille’s first prey, Abraham. In the vision, one of Alexandria’s best fighters sticks out his chest defiantly as Negan looms.

The first blow doesn’t fell Abraham and he sat up and spat blood, saying “Suck. My. Nuts.” A rather gangster comeback and totally in character for Abraham to say. But that was about it as Negan pounds his skull into a gooey red mush. However, Negan remains unconvinced. Furthering the mental torture, he drags Rick’s son Carl to the center of the circle and tells him to chop off his own son’s arm, or Rick would be forced to watch everyone die, and made to live to regret his decision.

The character has never been depicted as more fearful and unsure than at this moment. Rick is slobbering and pleading. I mean, snot bubbles and drool. Rick lifts the ax and only to be stopped by Negan just before he delivers the blow. He then walks over to Rosita, bat dripping with blood, and asks her to look at it, and she is unable to. At that moment, Daryl leaps up and strikes Negan before being wrestled to the ground. Instead of killing Daryl, Negan uses this as yet another opportunity to instill fear in the Alexandrians, saying; “I need you to know me”, before striking fan favorite Glenn, played by Steven Yuen.

True to the comic book created by Robert Kirkman, half of Glenn’s skull is split open and his left eye is protruding outside of his skull. Impressed by his audacity even against insurmountable odds, Daryl is loaded into a van by the Saviors and taken away.

As the Saviors leave altogether, the Alexandrians are left stunned about what just happened as they retrieve the bodies of their bludgeoned love ones. Maggie, pregnant with Glenn’s child, blames herself for the crew being vulnerable to Negan’s trap in the first place due to her deteriorating medical condition.

As the episode ends, she is the only one with any fight left as the rest are one part grieving, one part relieved. The Walking Dead is going into an entirely new direction, one in which the normal antagonists are not at the top of the food chain, nor do they have any way of getting back on top any time soon.