Boxing is slowly coming back.

“We couldn’t be more excited to be finally getting back to boxing,” said Leonard Ellerbe, CEO of Mayweather Promotions. “Everyone has been patiently waiting and the series of fights that we will collectively put on over the next few months will be great for boxing and the sports world in general.

“We’re kicking things off August 1 with a world title opportunity for our rising contender Angelo Leo who has been consistently grinding and taking care of business. He’s facing another young and focused undefeated fighter and only one of them can be crowned champion. Both guys are confident that the title belongs to them, which is going to make for a great fight from the first bell.” 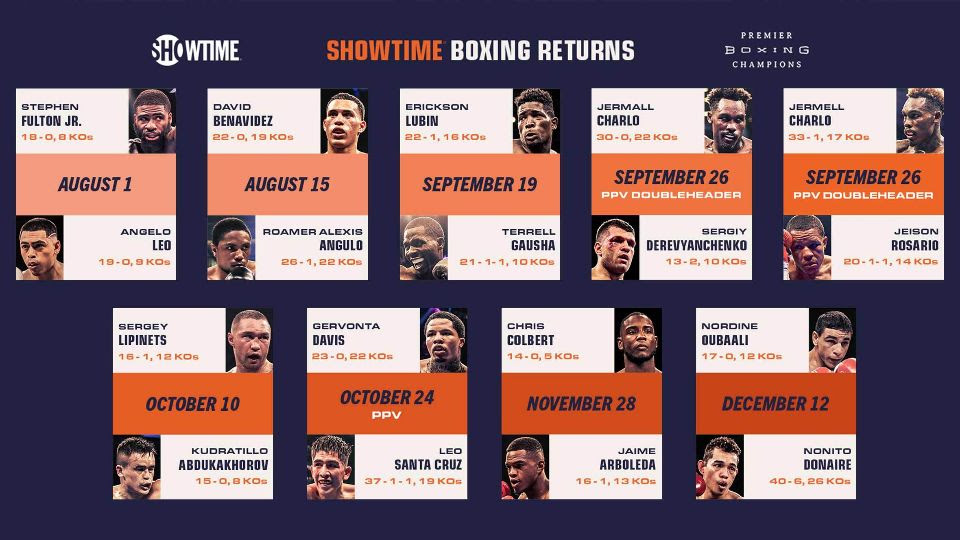 SHOWTIME is digging its heels back into combat sports with an aggressive schedule.

“We are proud to announce the strongest and most comprehensive schedule of fights in all of boxing,” said Stephen Espinoza, President, Sports and Event Programming, Showtime Networks Inc.

“Each bout on this schedule, our largest schedule announcement since 2018, carries high stakes and significant implications. From highly regarded prospects to emerging stars to established champions – all in tough match-ups – this lineup delivers on our promise to provide boxing fans with the best talent, the most exciting fights and the highest quality presentation in the sport. We are thrilled to return to live boxing with this star-studded schedule of exciting, meaningful fights.”

✅ Gervonta Davis vs Leo Santa Cruz is reportedly now a done deal for Oct 24th. [According to @TheAthleticBOX]

📋 It’s claimed Showtime will announce their full schedule of eight events today, likely behind-closed-doors, at Mohegan Sun with this fight being one of them. pic.twitter.com/8CQhfuaY06

“We will show everyone on September 26 that we’re the future of boxing,” said Jermall Charlo. “We’re going to let everyone in the world see the great things that me and my twin brother have done for the sport.

Who remembers the time when Danny Jacobs ran into Jermall Charlo? Crazy how Danny Jacobs made a lion turn into a cub. pic.twitter.com/8KAY38yQme

Doubleheaders are common in the NFL, NBA and MLB. There hasn’t ever been a boxing PPV doubleheader – until now.

Man, I ain't even going to lie, I am beyond excited about the potential fight between Rosario and Jermell Charlo. Rosario is a big boy. pic.twitter.com/Mx37S9kAfD

David Benavidez and more. It is the largest collection of world championship boxing announced since the COVID-19 pandemic forced a stoppage of the sport.

“It was a little difficult getting this camp started because – Seattle was the epicenter of the pandemic,” said Benavidez. “So, the number one key was to stay home, stay safe, and train at the right times. Now that we have the fight in August, we’ve brought a couple guys from different cities and everyone has been tested and everything has been good. I’m in my dad’s gym, so we can train whenever we want. We’ve been having a great training camp so far and now it’s just getting to the date smoothly.

Shame David Benavidez is taking that pointless voluntary. Need him vs Slick Shady next year pic.twitter.com/eQBzZMGjxn

However, SHOWTIME is still building new stars as well.

“This is my time. I’ve prepared for this my whole life,” said Fulton. “He will be a world champion one day, but not this time.”

He faces fellow undefeated contender Angelo Leo of the Mayweather stable in a marquee 12-round matchup for the vacant WBO junior featherweight world title.

“I’m excited to get back in the ring and to continue where I left off,” said Leo. “It’s an honor to be the main event on SHOWTIME and to be fighting for the WBO belt.”

The Premier Boxing Champions event is promoted by Mayweather Promotions and TGB Promotions. This will mark the first live boxing event on SHOWTIME since ShoBox: The New Generation on March 13 when the network presented what was to be the last nationally televised professional sporting event in the U.S. for several weeks.

The SHOWTIME boxing schedule begins on Saturday, August 1 and runs through the end of 2020.

Initially, each live telecast will be presented without fans in attendance from Mohegan Sun Arena in Uncasville, Conn. Included in the schedule are four world title eliminators, three interim title fights and 13 bouts in all pitting top-10 ranked fighters.

About: Fellow Americans and undefeated fighters Fulton and Leo are legitimate top-10 junior featherweight contenders who will meet for the vacant WBO 122-pound world title.

A southpaw from New Haven, Conn., Williams will clash with Las Vegas-based Aleem in an intriguing, 50-50 matchup between talented, undefeated prospects.

About: Undefeated Benavidez, 23, kicks off his second reign as WBC Super Middleweight Champion. In 2017, he became the youngest 168-pound champion in boxing history by defeating Ronald Gavril on SHOWTIME at just 20 years old. Angulo is coming off an upset win over heavily hyped and then unbeaten prospect Anthony Sims Jr.

The power-punching “Rolly” Romero of the Mayweather stable, who has scored five first- or second-round stoppages in his last six fights, is an undefeated ShoBox alum ranked No. 10 by the WBA while Marinez is ranked No. 6. Wallin vs. Kauffman is an intriguing heavyweight matchup between the Swedish southpaw and the veteran Kauffman.

Both fighters have survived bouts with the COVID-19 virus, made full recoveries and are anxious to get back in the ring. The winner will undoubtedly receive another big fight. The loser will go to the back of the line in the busy heavyweight division. This Premier Boxing Champions event is promoted by TGB Promotions and Sampson Boxing. The Romero vs. Marinez bout is co-promoted by Mayweather Promotions.

About: Lubin, already a veteran at just 24 years old, has excelled since his shocking first-round loss to Jermell Charlo three years ago. Gausha is a former U.S. Olympian with just one loss. Both men are poised and hungry for a signature win and the opportunity to fight for a unified 154-pound title, which will be on the line the following week. Nyambayar and Ramirez are legitimate top-10 contenders.

Nyambayar faced Gary Russell Jr. in February on SHOWTIME in the last SHOWTIME CHAMPIONSHIP BOXING telecast before the COVID-19 shutdown. Ramirez, of Mexico, is coming off a stoppage of previously unbeaten Leduan Barthelemy.

A graduate of the popular ShoBox: The New Generation series, Philadelphia native Ennis has fought twice on ShoBox and twice on SHOWTIME BOXING: Special Edition cards. Ennis is a former National Golden Gloves Champion ranked No. 12 by the WBO and No. 14 by the IBF. This Premier Boxing Champions event is promoted by TGB Promotions and the Ennis bout is in association with D & D Boxing.

About: Houston’s Charlo will defend his title against WBC No.-1 ranked Ukrainian Derevyanchenko in one of the main events of this pay-per-view twin bill that boasts four world title fights. Charlo has held the WBC middleweight title since 2019 and reigned as the IBF junior middleweight champion from 2015 to ’17.

Charlo holds wins at 154 pounds against championship-level fighters including Cornelius Bundrage, Austin Trout and Julian Williams. Derevyanchenko has twice challenged for the IBF middleweight title in 2018 and ’19, losing only to top-level opponents Daniel Jacobs and Gennadiy Golovkin.

The 23-year-old Figueroa claimed the interim WBA 122-pound title with an eighth-round stoppage of Yonfrez Parejo last April, before successfully defending the title with a homecoming KO of Javier Chacon in Edinburg, Texas. After being upgraded to the “regular” titlist, Figueroa retained his belt after a 12-round draw against Julio Ceja last November. The southpaw Vasquez is coming off a stoppage win over Alejandro Moreno in February of 2020. Magdaleno vs. Cruz is an IBF title eliminator matchup of ShoBox alums currently ranked 10th and sixth, respectively.

At stake is supremacy in a talent-rich division. The 25-year-old Barrios from San Antonio has held the WBA (regular) super lightweight title since September of 2019. His opponent Karl hails from Houston and is ranked No. 9 by the WBA. A regular sparring partner of Erislandy Lara and Jermell Charlo, Karl is trained by Ronnie Shields. Roman is a former unified super bantamweight champion, having held the WBA (Super) and IBF titles from 2019 to January 2020. Roman’s 19-bout winning streak was snapped in January in a split-decision loss to Murodjon Akhmadaliev.

Ranked in the top five by all four sanctioning bodies, Roman previously held the WBA title from 2017 to 2019. This unique PPV doubleheader is presented by Premier Boxing Champions and promoted by Lions Only Promotions and TGB Promotions. The Jermell Charlo-Jeison Rosario match is co-promoted with Sampson Boxing.

About: The 31-year-old Lipinets has won three significant fights in a row since his lone loss to Mikey Garcia, including a dominant stoppage that sent former word titlist Lamont Peterson into retirement. Uzbekistan’s Abdukakhorov is coming off his biggest win to date over former world titlist Luis Collazo and is yet to taste defeat since turning professional in 2015.

With Abdukakhorov ranked No. 1 by the IBF and Lipinets ranked No. 3, the winner will be in prime position to challenge the unified 147-pound world champion Errol Spence Jr. Sacramento’s Martinez of the Mayweather stable is an exciting prospect who thrilled ShoBox viewers when he scored one of the quickest knockouts in the history of the series last November, while Marrero is a grizzled veteran who held the WBA interim featherweight title in 2017.

Hawkins of the Mayweather stable is trained by Calvin Ford and a teammate of two-division world champion Gervonta Davis. Every one of Matias’ 15 career victories as a pro has come by way of knockout, with his only setback a unanimous-decision loss to Petros Ananyan back in February. This Premier Boxing Champions event is promoted by TGB Promotions, Top Rank, Inc. and Mayweather Promotions.

About: This blockbuster main event will be contested at the super featherweight limit of 130 pounds. The winner of the match, however, will be in the unique position to earn world championships at 130 and 135 pounds on the same night. Two crowd favorites with massive followings will meet with Santa Cruz’s newly won WBA (Super) 130-pound world title on the line.

The unbeaten “Tank” Davis is a two-division world champion and reigning WBA lightweight titlist at the age of 25. He emerged as a bona fide star in 2019 with sold-out main event bouts in Baltimore and Atlanta. “El Terremoto” Santa Cruz is a four-division world champion who avenged his only professional loss to Carl Frampton. The stage is set for one of the best matchups that can be made in all of boxing.

Both men are all-action fighters. Davis boasts a knockout percentage of .957 while Santa Cruz is one of the busiest punchers in the sport. The winner of this fight will rightfully earn a top-10 spot on the coveted pound-for-pound list. This Premier Boxing Champions event is promoted by Mayweather Promotions, TGB Promotions, GTD Promotions and Santa Cruz Boxing Club.

About: The WBA interim super featherweight champion Colbert has fought five times in the past 20 months. Arboleda of Panama earned a split-decision win over veteran Jayson Velez in a WBA junior lightweight eliminator in February. New York City’s Hitchins of the Mayweather stable represented his parents’ home country of Haiti in the 2016 Rio Olympic Games and Mendez is a former IBF Super Featherweight champion from the Dominican Republic.

This Premier Boxing Champions event is promoted by TGB Promotions and Sampson Boxing. The Hitchins vs. Mendez bout is co-promoted by Mayweather Promotions.

About: France’s Oubaali will be defending the WBC bantamweight world title for the third time. Donaire is the No. 1-ranked contender and fighting for his eighth world championship. A four-division titlist and former pound-for-pound mainstay, Donaire fought brilliantly in what many picked as 2019’s Fight of the Year, a decision loss to Naoya Inoue. At age 37, Donaire is attempting to defy the belief that the smaller the fighter, the earlier the prime. The Premier Boxing Champions event is promoted by TGB Promotions.