Philadelphia – After a furious seven-minute stretch to open the second half of last night’s East Regional Final between ACC foes Notre Dame and North Carolina, the thunderous applause and opposing chants were drowning each other out in Philly’s rocking Wells Fargo Center.

When North Carolina’s Marcus Paige converted a driving layup with a little bit more than twelve minutes left on the clock, the basket gave UNC a 53-52 lead, an advantage that they would ultimately not relinquish for the rest of the game as they went on to suffocate a tough Irish squad by a final score of 88-74.

North Carolina has been playing its best ball at the most opportune time, winning its four tournament games by an average of 15.4 points.

The first half featured some exceptional college basketball being played between familiar foes with vastly different philosophies. While North Carolina looked to push the pace and tilt the game in their favor with an outstanding transition game, the Fighting Irish were a textbook study in halfcourt patience and execution against a team that was bigger, stronger and more athletic.

While Tar Heel forwards Brice Johnson and Justin Jackson asserted North Carolina’s interior dominance early on, Notre Dame’s gifted point guard Demetrius Jackson and forward V.J. Beachem, who has been a national revelation during this year’s tournament, worked their magic on the perimeter and in the mid-range.

Coach Mike Brey’s squad’s offensive game-plan worked to perfection in the first half as they spread the floor with four players stationed behind the three-point line, all cutting, moving, setting picks and crisply passing the ball  on the perimeter while bruising big man Zach Auguste posted up in the paint.

The strategy opened up gaps that Notre Dame was able to exploit once their three-point shots began to fall with regularity. By all accounts, the Irish should have been on campus this week partaking in the school’s long-held passion and tradition of spring football, where evidently there is a quarterback controversy brewing. 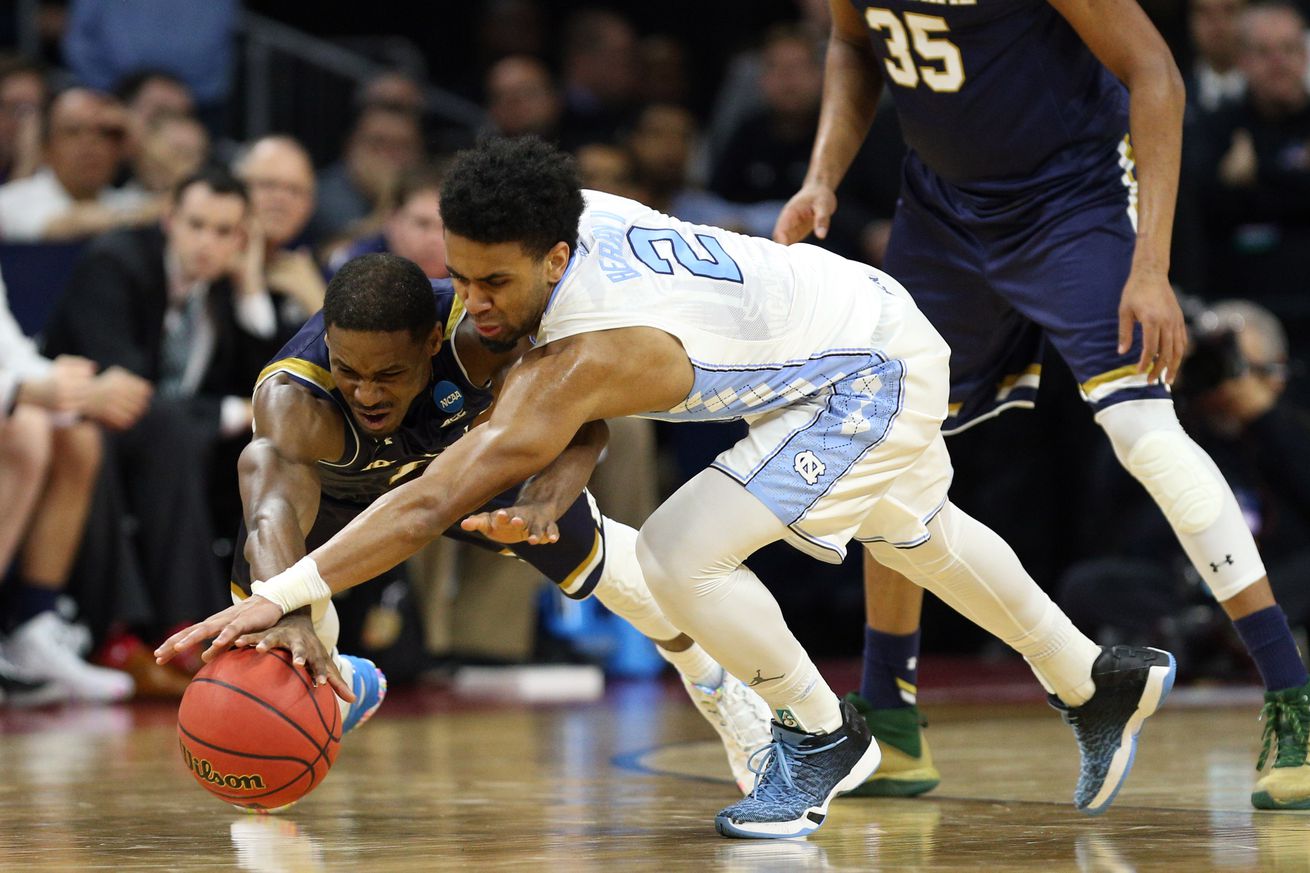 In Friday night’s regional semifinal, they were losing to Wisconsin with less than 30 seconds remaining. In the first round at Barclays Center in Brooklyn, they were down by 12 points at halftime. In the second round, Stephen F. Austin had their foot on their necks as they trailed the Lumberjacks by six points with slightly more than a minute and a half to be played.

Somehow, they always found a way to keep dancing. And it seemed like they might do it again after falling behind 51-40 after North Carolina forward Kennedy Meeks opened up the second half with eight consecutive points, all of them of a bruising nature. But just when Roy Williams’ squad looked to be in control, Notre Dame came charging back, spearheaded by their floor general extraordinaire Demetrius Jackson.

When sophomore forward Bonzie Colson converted a layup in the paint with 12:58 remaining in the game, Notre Dame took its first lead, 52-51, since leading by a score 29-27 with 7:02 left before halftime, which provided the game’s signature SportsCenter highlight when Beachem rose up after attacking the baseline to deliver a thunderous, leaning baseline dunk that had journalists in press row acting like Wayne Selden’s uncle Anthony.

Brice Johnson, named the East Regional’s Most Outstanding Player, accumulated 25 points and 12 rebounds. It was his school-record 23rd double-double of the year as the Tar Heels reached the Final Four for the first time since Drake was reminiscing about the best he ever had and Jamie Foxx was blaming it on the alcohol  back in 2009, when they won the last of their five national championships.

Both squads went blow for blow in an exciting first half of seesaw action that saw neither team lead by more than six points. Notre Dame shot 58.3% overall and a sparkling 60% from deep. North Carolina  was even better, converting 64% of their field goal attempts, including a mesmerizing 66.7% from the three-point line.

The Tar Heels owned the boards, though and began to choke the Irish into submission over the final 10 minutes.

Marcus Paige was named to the All-Regional team, along with his teammate Johnson, and he added 13 points. Joel Berry II chipped in with 11 points and eight assists.

Notre Dame’s Demetrius Jackson and V.J. Beachem, who were also named to the All-Regional squad along with Paige, Johnson and Indiana’s Yogi Ferrell, had 26 and 18 points respectively for sixth-seeded Notre Dame, which was attempting to make the school’s first Final Four since Sandy fell in love with a Grease-ball named Danny in 1978.

“I thought we put ourselves in position,” Notre Dame coach Mike Brey said. “We took that one-point lead and they answered it like men. … I thought the way they answered that run was championship level.”

North Carolina is the tournament’s lone remaining No. 1 seed. They’ll take on fellow ACC member Syracuse, a No. 10 seed that has been the surprise of this year’s March Madness, in the Final Four on Saturday night in Houston.