The NBA is leading the way when it comes to diversity and gender in hiring.

The 2017 National Basketball Association Racial and Gender Report Card (RGRC) was released today and it confirmed the leagues lofty position as the leader in the sports industry with its commitment to and record for racial and gender hiring practices during the 2016-2017 NBA season.

The overall grade was an A- with 88.5 points as the NBAs diversity numbers support the Leagues growing reputation as a players league, one where athletes are empowered and ownership is open to giving people of color a chance at plush leadership gigs. The NBA actually improved in many areas covered in the Report Card.

Richard Lapchick, the Director of The Institute for Diversity and Ethics in Sport (TIDES or The Institute) at the University of Central Florida and primary author of the report, stated, In 2017, no other mens league reaches the same points for race, gender or the combined score. The NBA remains the industry leader among mens sports for racial and gender hiring practices. This years percentages showed increases in many areas and the grades were remarkable especially because TIDES increased the standards for the grades.

There was also improvement for women as team vice-presidents and in team professional positions. Lapchick reports says that Overall, Commissioner Silver and the NBA are the industry leaders in diversity hiring.”

The NBA has the most diverse league office in mens sport with 35.1 percent of the professional positions held by people of color and 38.8 percent held by women. While both figures represented slight decreases of 0.2 and 0.8 of a percentage point, respectively, they were by far the best in mens professional sport. There were 58 women serving as vice presidents at the NBA League Office in the 2016-2017 season, up from 50 during the 2015-2016 season.

The NBA was the first league to have three owners of color leading its teams. Also, there were six women who served as team presidents/CEOs during the 2016-2017 season, the highest in mens professional sports.

NBA general managers of color decreased from four to three (10 percent) in the 2016-2017 season. That decrease resulted from the promotion of Toronto’s 2016 general manager Masai Ujiri to President which resulted in an increase in the number of team presidents/CEOs of color from 5.3 percent (three) in 2015-2016 to 6.9 percent (four) in 2016-2017.

The NBA stands alone as far as people of color being majority owners of teams. Michael Jordan remains the lone African-American, as majority owner of the Charlotte Hornets. Vivek Ranadive, who is from India is the controlling owner of the Sacramento Kings. Marc Lasry, who was born in Morocco, is an owner of the Milwaukee Bucks and is the NBA’s third owner of color. They were the first three owners of color to lead their teams at the same time in any of the major professional sports leagues.

So overall, the NBA is taking the lead in its commitment to diversifying its league and front offices and integrating the 80.9 percent people of color and 25.1 percent international ballers that comprise NBA rosters into the leadership and decision-making structure. Other pro leagues still have some catching up to do, but as 2020 lurks, its clear that the NBA will be the pro league to lead us into a new decade of diversity and with it comes a new perspective on business overall.

Deputy Commissioner Mark Tatum is the highest ranking African-American of any of the professional American sports leagues. 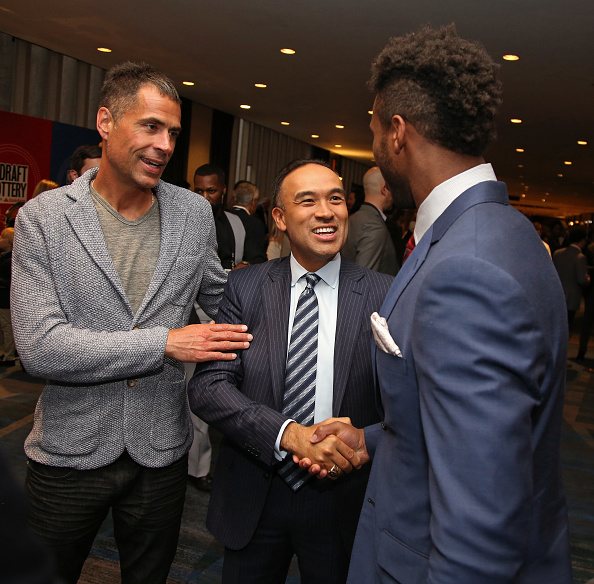 Lapchick attributes the NBA’s strong marks to its past two commissioners – David Stern and Adam Silver. Months after he became commissioner in 2014, Silver led the way in forcing out racist Los Angeles Clippers owner Donald Sterling after he was secretly recorded making bigoted remarks about African-Americans.

“That kind of out-front posturing is important,” Lapchick told NBA.com. “It sends a signal to the teams and obviously to the league office that diversity and inclusiveness is very important. I think all commissioners feel that way but I think the NBA has made its stamp even more powerful.”