10 years ago, I went on a mission trip to Mexico. As one of the youth leaders, I was responsible for the girls in the group. My goal was to be there for them and set the example.

One way I tried to do that was while visiting a juvenile detention center. The girls were a bit scared at first, but along with our adults, the facility was well supervised outside, where we gathered with the residents. Tall, chain link, security-lined fences surrounded the complex, which consisted of a large courtyard with concrete volleyball and basketball courts.

And, a concrete soccer pitch.

I even impressed a few guys when I stuff-blocked one of them. Having worked up a sweat, I decided to hit the pitch.

I love soccer. Growing up, I was athletic and talented and…uh…okay, maybe in my dreams I was all that.

Both teams were made up of young guys, no girls. I asked if I could play. Some looked at me like I was loca. Coming from a Hispanic background, I knew they were quite machismo in their thinking. Im sure they muttered a few more things in Spanish under their breath about this chica who wanted to play.

But a few of the guys that I played against in volleyball had made their way to the pitch before me, so they smiled and said, S.

I stood on the sideline until someone needed a sub. Trying not to make a complete fool of myself, but filled with my competitive spirit, I mixed it up with the guys. A couple of clean passes and a (lame) shot on goal and I was having the time of my life.

Right when I was going for a ball, BOOM!

Next thing I knew I was on my back, catching my breath on the concrete pitch. I mixed it up alright. However you say hit by a mack truck in Spanish — thats what happened.

They all came to check on me and, of course, I acted like I was fine. No way I was going to show weakness in front of these macho, young guys. I got back up and kept on playing.

In so doing, I earned their respect as a chica that could play their game. 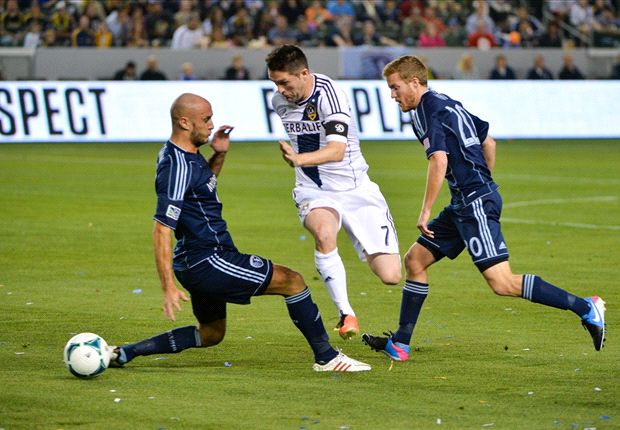 I thought about that moment while reading about Major League Soccers campaign, Dont Cross the Line.

Soccer/Football/Ftbol is the worlds game. Its the beautiful game. Whether youre on a green, grassy, pristine field in Southern California or the dry, hot, rock-hard dirt of Sudan, a child only needs a ball – or some semblance of one – to play.

Much like my venture in Mexico on a concrete pitch, the love for the game brings people together.

But, it also has a way of dividing.

Search racism in soccer or racism in football and youll find a seemingly endless list of stories on the subject.

Planet Futbol: Penalties for fan racism must get more severe for change to happen

Remezcla: Yes, I Am a Black Man and Proudly So: Felipe Melo Fires Back at Uruguayan That Called Him a Macaco

No soccer league is immune. Especially not with social media – a tool which gives everyone a voice – now part of the equation.

In May 2016, Kick It Out published a study on the effects of social media in football. It was based on research by the group Brandwatch for the 2015-16 time period. In it, they were able to identify the most common forms of discrimination on public social media accounts. Postings were directed at both clubs and players.

What the Kick It Out report also highlights is that the discrimination goes beyond just racism. Discriminatory postings spanned everything from gender to race to disability to sexual orientation. Its a blemish on a sport that leagues around the world have been trying to address for years.

Enter MLS and their Dont Cross the Line campaign.

Major League Soccer is committed to diversity and inclusion, said JoAnn Neale, Chief Administrative Officer of MLS. Dont Cross the Line is our League-wide campaign which embodies this core value of our League.

As one of the more diverse sports leagues in North America, Major League Soccers Dont Cross the Line policy is a vow toward community. Everyone who is a part of our game, whether as a fan, player, partner or employee, should be treated with dignity and respect, added Neale.

Part of the campaign included representatives from each of the 22 MLS clubs encouraging fans through a PSA on their respective social media channels to Take the Pledge. Said Neale, We are extremely proud that more players than ever before – representing all 22 MLS clubs – participated in this years PSA, and we invite everyone to join us in taking the pledge to end discrimination.

Fans who wish to participate can share their commitment on their own social media channels. Their social media profile picture is then added automatically to a fan mosaic that connects with others whove also taken the pledge in one large, online community.

Through positive social media interactions and a vision of community, MLS is committed to improving the relationship between their league, teams, players and fans.

We are a diverse human race. Whether its race, culture, faith, ethnicity or some other identifier, we are a complex race.

Sometimes diversity and cultural differences can divide. As I found out in Mexico, MLS and their fans can unite behind their love of the sport to promote respect.

Whether its soccer or another, sport has a way of breaking down the walls of division.